Thys (1969) described at least 77 species (besides a number of sub-species) of Tilapia, and Jhingran and Gopalakrishnan (1974) listed 22 species that have been used in experimental or production-scale fish culture.

Thys (1969) described at least 77 species (besides a number of sub-species) of Tilapia, and Jhingran and Gopalakrishnan (1974) listed 22 species that have been used in experimental or production-scale fish culture. Considerable confusion exists on the taxonomic status of many of them. Because of the overlap of morphological characteristics, taxonomists have tried to split the genus of Tilapia largely according to breeding behaviour, which coincides roughly with macrophytophagous, micro-phagous and omnivorous feeding habits. The substrate spawners, which make nests on the bottom of water bodies and spawn in them, retained the name Tilapia and the mouth-brooders, which incubate the fertilized eggs in the mouth of the female or male parent, came under a new genus Sarotherodon (meaning ‘brush toothed’) (Trewavas, 1982). Later, a new genus, Oreochromis, was constructed to accommodate species which spawn in nests on the bottom of water bodies but brood the eggs in the mother’s mouth. Though in most cases Tilapia spp. have coarse teeth and feed onmacrophytes, Sarotherodon spp. have fine teeth and feed on unicellular and filamentous algae. The feeding habits are, however, highly flexible and are not a strong diagnostic characteristic. Recently, two alternative classifications were proposed. One includes five genera: Tilapia,

Sarotherodon, Oreochromis, Tristromella and Danakilia. The other contains only one genus, Tilapia, with seven sub-genera: Heterotilapia, Pelmatilapia, Sarotherodon, Oreochromis, Nya-salapia, Alcolapia and Neotilapia (Fishelsonand Yaron, 1983). These revisions of the classification have not eliminated the confusion, and other taxonomists prefer the continued use of the broad genus Tilapia for all the species. As aquaculturists may find it difficult to keep up with the frequently changing nomenclature. 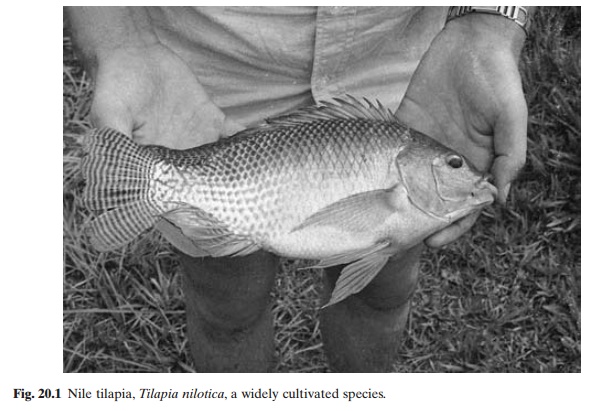 Two other species, T. andersonii and T. spilurus, also seem to be of some importance. It is believed that very few pure strains of these species are used in fish farms, and natural cross-breeding has occurred in many areas. As will be discussed later in this section, inter-specific hybrids including red-coloured hybrids have been cultured commercially on a limited scale.

Though essentially a tropical species which cannot survive temperatures below 10°C, tilapias have been introduced for commercial culture in sub-tropical areas and even in temperate areas for indoor culture under controlled temperature conditions.