Another approach helpful to find the summary measures for probability distribution is based on the ‘moments’.

Another approach helpful to find the summary measures for probability distribution is based on the ‘moments’. We will discuss two types of moments.

i. Moments about the origin. (Origin may be zero or any other constant say A ). It is also called as raw moments.

ii. Moments about the mean is called as central moments.

Moments about the origin

This is called the mean of the random variable X. Hence the first order raw moment is mean.

This is called second order raw moment about the origin.

Moments about the origin 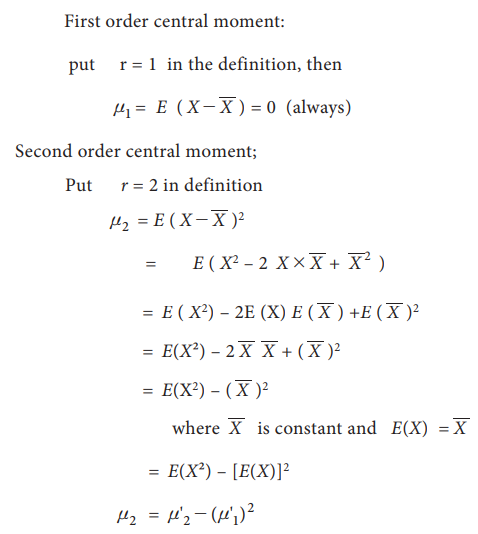 This is called the 2nd central moment about the mean and is known as the variance of the random variable X.

Some results based on variance:

A moment generating function (m.g.f) of a random variable X about the origin is denoted by Mx(t) and is given by

From the series on the right hand side, μr’ is the coefficient of rt/r! in Mx (t) .

For a random variable X to find the moment about origin we use moment generating function.

Since Mx (t) generates moments of the distribution and hence it is known as moment generating function.

Using the function, we can find mean and variance by using the first two raw moments.

For some distribution, the M.G.F does not exist. In such cases we can use the characteristic function and it is more servicable function than the M.G.F.