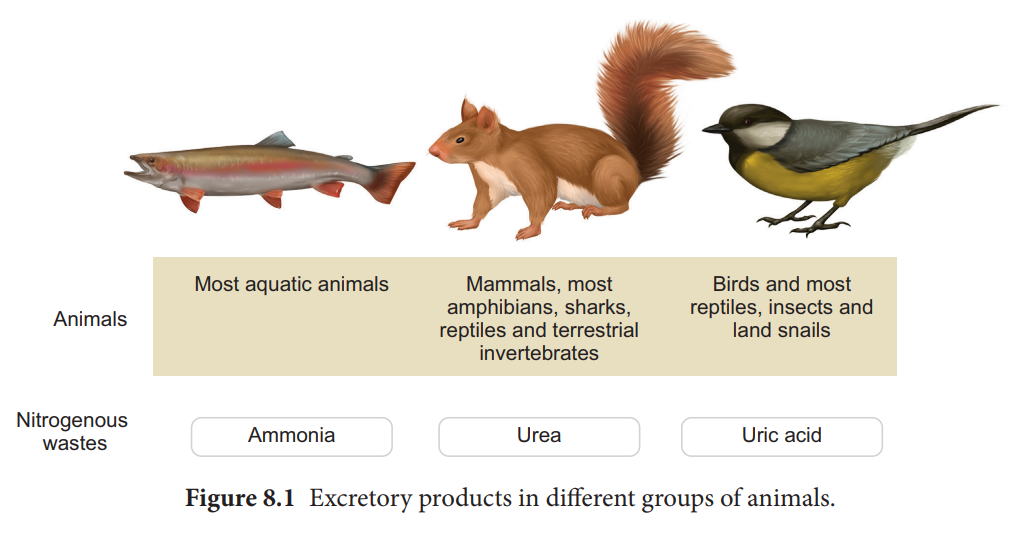 Excretory system helps in collecting nitrogenous waste and expelling it into the external environment.

Excretory  system helps  in  collecting  nitrogenous  waste  and  expelling it  into  the external environment. Animals have evolved different strategies to get rid of these nitrogenous wastes. Ammonia produced during amino acid breakdown is toxic hence must be excreted either as ammonia, urea or uric acid. The type of nitrogenous end product an animal excretes depends upon the habitat of the animal. Ammonia requires large amount of water for its elimination, whereas uric acid, being the least toxic can be removed with the minimum loss of water, and urea can be stored in the body for considerable periods of time, as it is less toxic and less soluble in water than ammonia.

Animals that excrete most of its nitrogen in the form  of ammonia are called ammonoteles. Many fishes, aquatic amphibians and aquatic insects are ammonotelic.

In bony fishes, ammonia diffuses out across the body surface or through gill surface as ammonium ions. Reptiles, birds, land snails and insects excrete uric acid crystals, with a minimum loss of water and are called uricoteles. In terrestrial animals, less toxic urea and uric acid are produced to conserve water. Mammals and terrestrial amphibians mainly excrete urea and are called ureoteles. Earthworms while in soil are ureoteles and when in water are ammonoteles. Figure 8.1 shows the excretory products in different groups of animals. 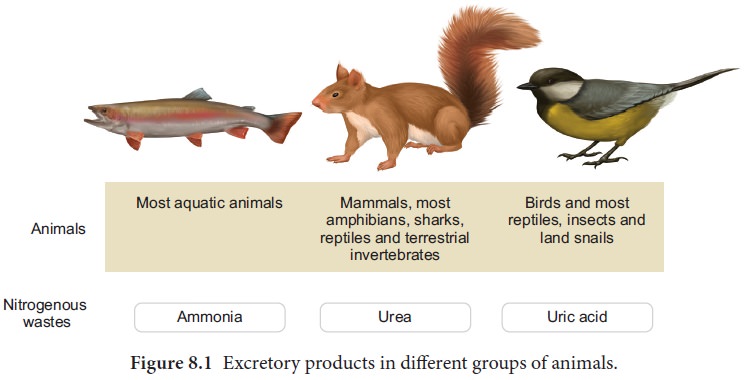 Nephron is the structural and functional unit of kidneys. Reptiles have reduced glomerulus or lack glomerulus and Henle’s loop and hence produce very little hypotonic urine, whereas mammalian kidneys produce concentrated (hyperosmotic) urine due to the presence of long Henle’s loop. The Loop of Henle of the nephron has evolved to form hypertonic urine. Aglomerular kidneys of marine fishes produce little urine that is isoosmotic to the body fluid. Amphibians and fresh water fish lack Henle’s loop hence produce dilute urine (hypoosmotic)