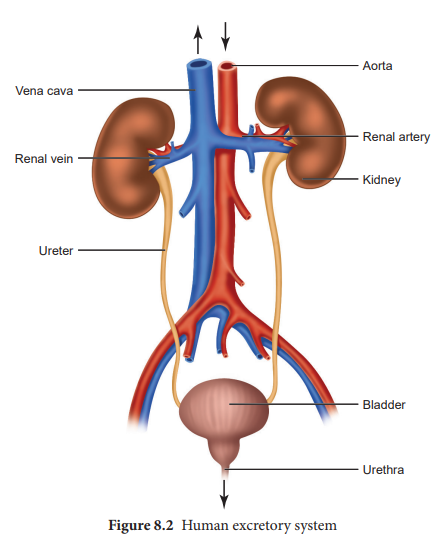 Excretory system in human consists of a pair of kidneys, a pair of ureters, urinary bladder and urethra .

Excretory system in human consists of a pair of kidneys, a pair of ureters, urinary bladder and urethra (Figure. 8.2). Kidneys are reddish brown, bean shaped structures that lie in the superior lumbar region between the levels of the last thoracic and third lumber vertebra close to the dorsal inner wall of the abdominal cavity. The right kidney is placed slightly lower than the left kidney. Each kidney weighs an average of 120-170 grams. The outer layer of the kidney is covered by three layers ofsupportive tissues namely, renal fascia, perirenal fat capsule and fibrous capsule. 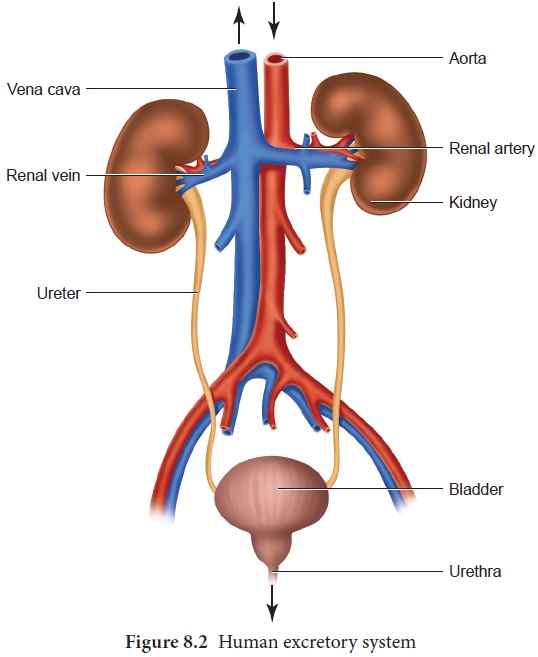 The longitudinal section of kidney (Figure. 8.3) shows, an outer cortex, inner medulla and pelvis. The medulla is divided into a few conical tissue masses called medullary pyramids or renal pyramids. The part of cortex that extends in between the medullary pyramids is the renal columns of Bertini. The centre of the inner concave surface of the kidney has a notch called the renal hilum, through which ureter, blood vessels and nerves innervate. Inner to the hilum is a broad funnel shaped space called the renal pelvis with projection called calyces. 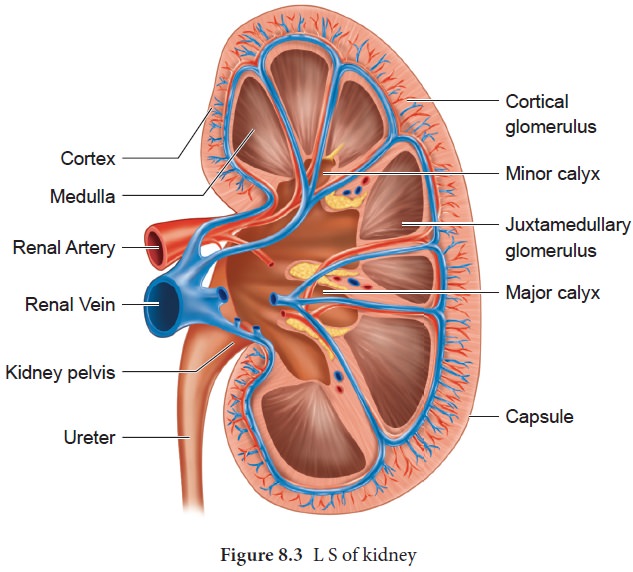 2. Structure of a nephron

Each kidney has nearly one million complex tubular structures called nephron (Figure 8.4). Each nephron consists of a filtering corpuscle called renal corpuscle (malpighian body) and a renal tubule. The renal tubule opens into a longer tubule called the collecting duct. The renal tubule beginswith a double walled cup shaped structure called the Bowman’s capsule, which encloses a ball of capillaries that delivers fluid to the tubules, called the glomerulus (Figure 8.4). The Bowman’s capsule and the glomerulus together constitute the renal corpuscle. The endothelium of glomerulus has many pores (fenestrae). The external parietal layer of the Bowman's capsule is made up of simple squamous epithelium and the visceral layer is made of epithelial cells called podocytes. The podocytes end in foot processes which cling to the basement membrane of the glomerulus. The openings between the foot processes are called filtration slits. 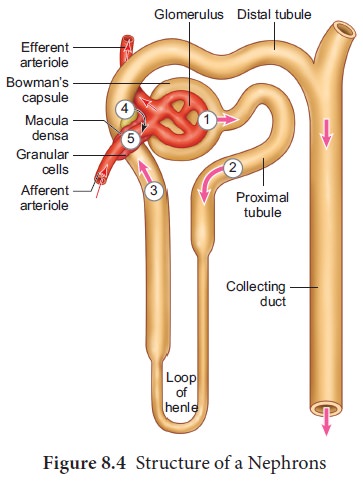 The renal tubule continues further to form the proximal convoluted tubule  [PCT] followed by a U-shaped loop of Henle (Henle’s loop) that has a thin descending and a thick ascending limb. The ascending limb continues as a highly coiled tubular region called the distal convoluted tubule [DCT]. The DCT of many nephrons open into a straight tube called collecting duct. The collecting duct runs through the medullary pyramids in the region of the pelvis. Several collecting ducts fuse to form papillary duct that delivers urine into the calyces, which opens into the renal pelvis. 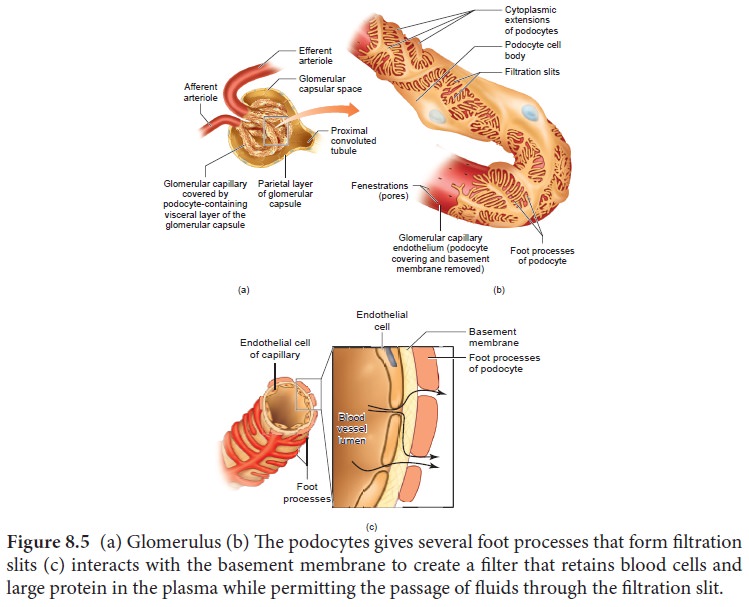 In the renal tubules, PCT and DCT of the nephron are situated in the cortical region of the kidney whereas the loop of Henle is in the medullary region. In majority of nephrons, the loop of Henle is too short and extends gives several foot processes that form filtration slits (c) interacts with the basement membrane to create a filter that retains blood cells and large protein in the plasma while permitting the passage of fluids through the filtration slit. 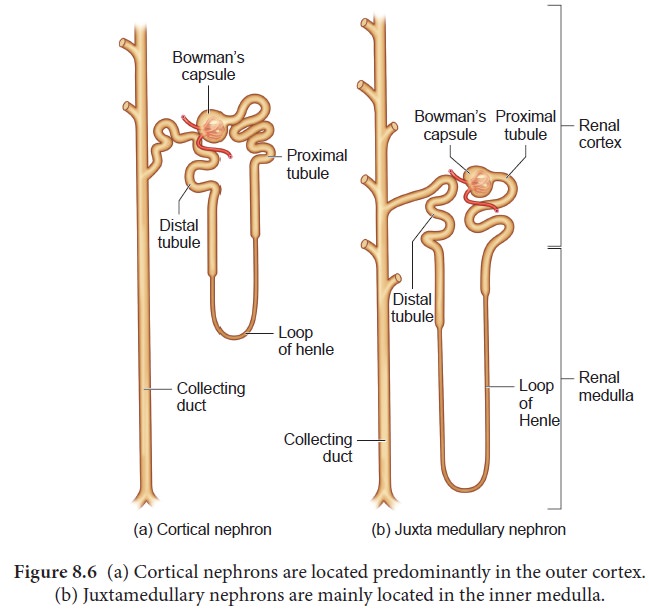 Vasa recta is absent or reduced in cortical nephrons (Figure 8.7). 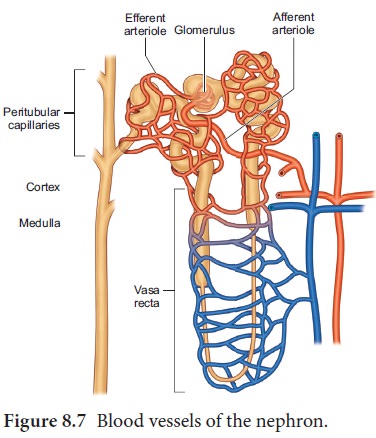 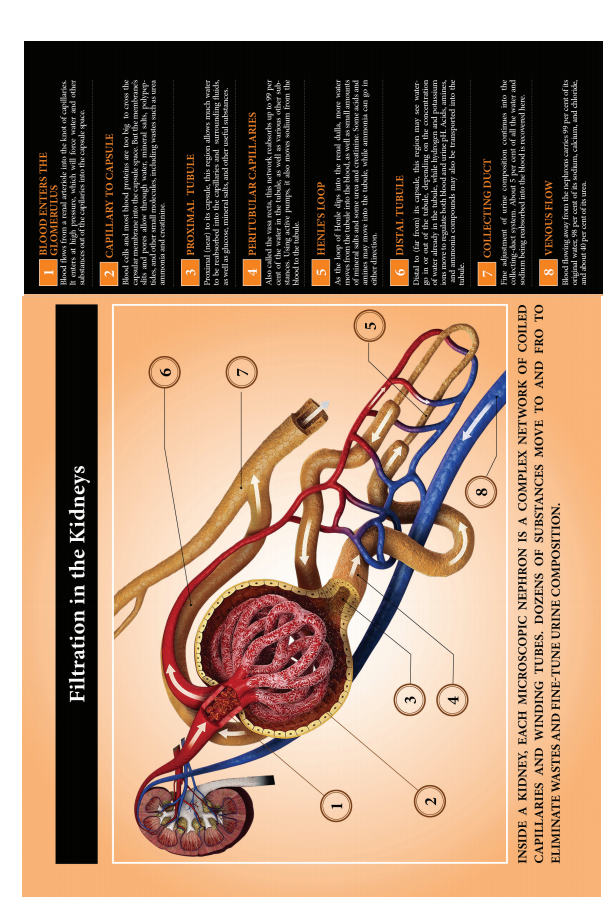