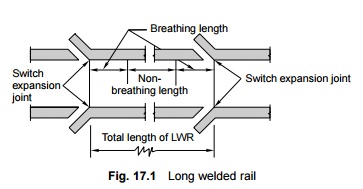 The ill effects of the rail joint are well known, including the fact that a track with joints requires about 30% extra maintenance work as compared to a plain track.

As mentioned earlier, a rail joint is the weakest link in the railway track. The ill effects of the rail joint are well known, including the fact that a track with joints requires about 30% extra maintenance work as compared to a plain track. The best remedy for the problems caused by rail joints lies in welding the rails and reducing the number of joints to the extent possible. The modern welded railway track incorporates systematic welding of rails, which provides it the potential to carry trains at faster speeds, provide better riding conditions, and reduce maintenance costs. The following terms are commonly used with respect to welded tracks.

Long welded rail The long welded rail (LWR) is a welded rail in which the central portion does not undergo any longitudinal contraction or expansion due to temperature variations (thermal expansion). Normally, a rail with a length greater than 250 m on BG and 500 m on MG functions as an LWR (Fig. 17.1). In the Indian setting, the maximum length of the LWR is normally restricted to one block section.

Anchor length (la) The anchor length is the length of the track that is required to resist the pull exerted by the rail tensor on the rails.

Buffer rails Buffer rails are a set of rails provided at the ends of an LWR to allow the expansion or contraction of the breathing lengths due to temperature variations.

Destressing Destressing is an operation undertaken with or without the use of rail tensors to attain a stress-free LWR at a specified rail temperature.

Rail temperature This is the temperature of the rail as recorded by an approved rail thermometer at the site. This is different from the ambient temperature, which is the atmospheric temperature as reported by the meteorological department.

Installation temperature (ti) This is the average rail temperature achieved when the rails are being fastened to the sleepers at the time of installation of LWRs.

Prevailing rail temperature (tp) This is the prevailing temperature of the rail at the time of any operation connected with destressing being carried out.

Destressing temperature (td) This is the average rail temperature at the time of the fastening of rails to sleepers after destressing an LWR without the use of rail tensors.