The formation should not pose any problems in the laying of LWRs. In stretches where the formation is bad, it should be stabilized before the LWRs are laid. A cross slope of 1 in 40 should be provided at the time of screening and laying of LWRs. In the case of concrete sleeper tracks, an extra cess width is provided to the extent of 90 cm for embankments and 60 cm for cuttings.

A clean ballast cushion of a minimum depth of 250 mm (10") should be provided below the bottom of the sleeper for LWRs. In order to increase resistance, the shoulder width of the ballast should measure 350 mm in the case of straight tracks and the inside of curves and 500 mm in the case of the outer ends of curves. The ballast should also be humped to a height of 150 mm on both shoulders.

The typical ballast profiles for LWRs for single-line and double-line BG concrete sleeper tracks with a 250 mm (10") ballast cushion are given in Figs 17.2 and 17.3, respectively and are also, respectively, summarized in Tables 17.2 and 17.3. 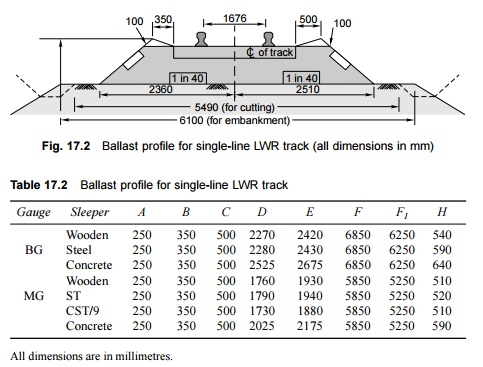 If followed by a non-LWR track, the ballast section and depth of the LWR track should be continued over the switch expansion joint or buffer rail assembly and also up to the rail lengths beyond it.

3 Sleepers Prescribed for LWR and CWR

The sleepers prescribed for LWR and CWR tracks are listed below.

(i)  Concrete sleepers with elastic fastenings.

(ii)  Untreated or hard (U category) wooden sleepers with fastenings for speeds not exceeding 160 km/h.

However, as an interim measure, steel trough sleepers with loose jaws and keys, untreated wooden sleepers, and CST-9 sleepers are also permitted.

LWRs should be laid with 60-kg, 52-kg, or 90 R rails on BG and 90 R or 75 R rails on MG barring the portions already laid with 60 R rails. Generally, new rails with fish bolt holes should not be used for LWRs. Further, level crossings should not fall within the breathing lengths of LWRs and switch expansion joints or buffer rails should be located at the end of the LWRs.