It is well known that metals expand and contract with increase or decrease in temperature, i.e., undergo thermal expansion.

where, P is the force in kilograms, A is the sectional weight in kg/m, and T is the temperature variation in o C. For a 52-kg rail

In the case of LWR, the thermal expansion of the rail takes place at the rail ends because of temperature variations and the inability of the resisting force offered by the rail and the ballast to overcome the same. A long welded rail continues to expand at its ends up to that particular length at which an adequate resisting force is developed towards the centre. A stage is finally reached at a particular length of the rail from its ends when the resistance offered by the track structure becomes equal to the thermal forces created as a result of temperature variations. There is no alternation in the rail length beyond this point. The cumulative value of the expansion or contraction of these end portions of the rail (breathing lengths) is given by the formula

The portion at the end of the long welded rail, which undergoes thermal expansion, is called the breathing length. On Indian Railways this length is equal about 100 m at either end of the rail in the case of BG tracks.

Example 17.1 Calculate the minimum theoretical length of LWR beyond which the central portion of rail would not be subjected to any thermal expansion, given the following data: cross-sectional area of a 52-kg rail section = 66.15 cm2, coefficient of thermal expansion of rail steel = 11.5 × 10 -6 per o C, temperature variation = 30 o C, modulus of elasticity of rail steel = 2 × 10 6 kg/cm2, sleeper spacing = 65 cm, and average restraining force per sleeper per rail = 300 kg. 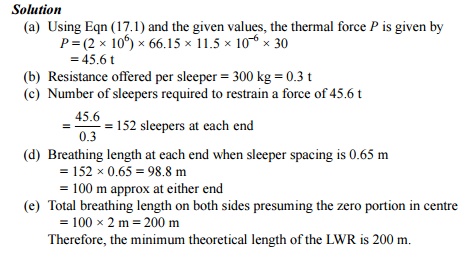