Mitochondria are the sites of cell respiration

Light microscopic studies of many different cells revealed small granules, with an appearance similar to bacteria.

Mitochondria are the sites of cell respiration

Light microscopic studies of many different cells revealed small granules, with an appearance similar to bacteria. In 1898 the botanist Carl Benda (Berlin) named these granules mitochondria (“threadlike bodies”). For a long time, however, the function of these mitochondria remained unclear.

As early as 1913, Otto Warburg realized that cell respiration involves the function of granular cell constituents. He succeeded in isolating a protein from yeast that he termed “Atmungsferment” (respiratory ferment), which catalyzes the oxidation by oxygen. He also showed that iron atoms are involved in this catalysis. In 1925 David Keilin from Cambridge (England) discovered the cytochromes and their participation in cell respiration. Using a manual spectroscope, he identified the cytochromes-a, -a3,-b, and -c (Fig. 3.24). In 1928 Otto Warburg showed that his “Atmungsferment” contained cytochrome-a3. A further milestone in the clarification of cell respiration was reached in 1937, when Hermann Kalckar (USA) observed that the syn-thesis of ATP in aerobic systems depends on the consumption of oxygen. The interplay between cell respiration and ATP synthesis, termed oxidative phosphorylation, was now apparent. In 1948 Eugene Kennedy and Albert Lehninger (USA) showed that mitochondria contain the enzymes of the cit-rate cycle and oxidative phosphorylation. These findings demonstrated the function of the mitochondria as the power station of the cell. 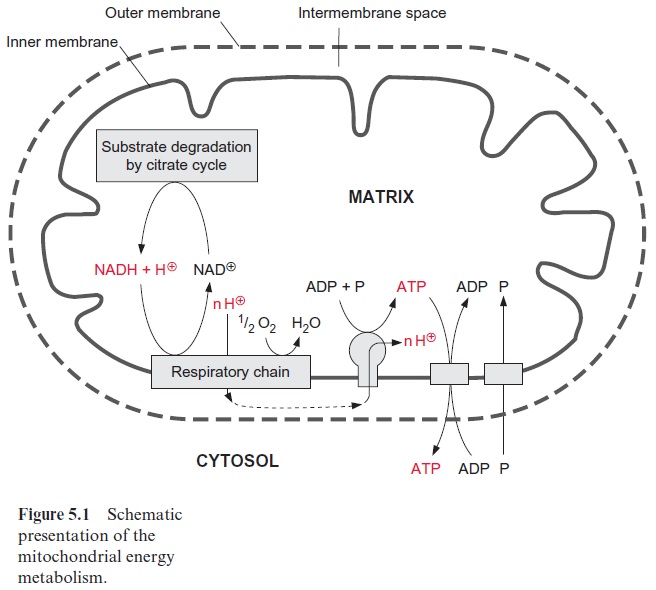