Microwave transmission refers to the technology of transmitting information or energy by the use ofelectromagnetic waves whose wavelengths are conveniently measured in small numbers of centimetre; these are called microwaves. 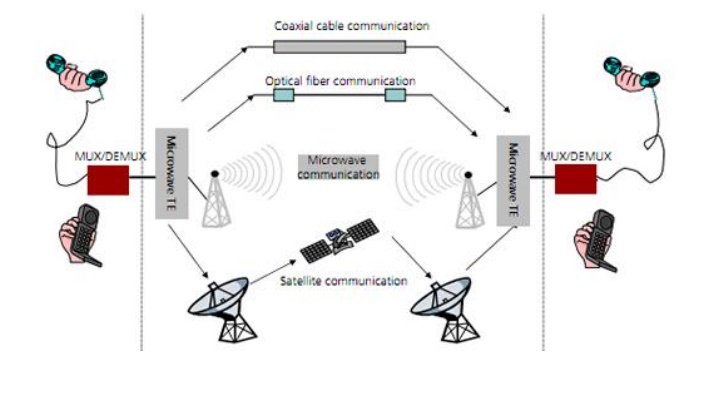 Microwave transmission refers to the technology of transmitting information or energy by the use ofelectromagnetic waves whose wavelengths are conveniently measured in small numbers of centimetre; these are called microwaves. This part of the radio spectrum ranges across frequencies of roughly 1.0 gigahertz (GHz) to 30 GHz. These correspond to wavelengths from 30 centimeters down to 1.0 cm.

Microwaves are widely used for point-to-point communications because their small wavelength allows conveniently-sized antennas to direct them in narrow beams, which can be pointed directly at the receiving antenna. This allows nearby microwave equipment to use the same frequencies without interfering with each other, as lower frequency radio waves do. Another advantage is that the high frequency of microwaves gives the microwave band a very large information-carrying capacity; the microwave band has a bandwidth 30 times that of all the rest of the radio spectrum below it. A disadvantage is that microwaves are limited to line of sight propagation; they cannot pass around hills or mountains as lower frequency radio waves can.

The next higher part of the radio electromagnetic spectrum, where the frequencies are above 30 GHz and below 100 GHz, are called "millimeter waves" because their wavelengths are conveniently measured in millimeters, and their wavelengths range from 10 mm down to 3.0 mm. Radio waves in this band are usually strongly attenuated by the Earthly atmosphere and particles contained in it, especially during wet weather. Also, in wide band of frequencies around 60 GHz, the radio waves are strongly attenuated by molecular oxygen in the atmosphere. The electronic technologies needed in the millimeter wave band are also much more difficult to utilize than those of the microwave band.