The basic television Broadcast transmitter block diagram is shown in figure (a).

However only one antenna is used for transmission of the video as well as audio signals. Thus these modulated signals have to be combined together in some appropriate network. In addition there are other accessories also. For instance, video as well as audio signals have to be amplified to the desired degree before they modulate their respective RF carriers. 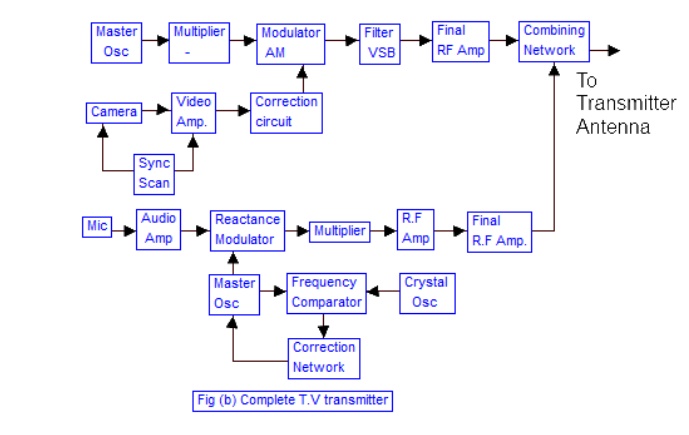 Figure (b) depicts the complete block diagram of a Television Broadcast Transmitter. The important block have already been discussed individually in the preceding sections. that makes understanding of the diagram shown here much more simple. A brief explanation is given ahead. The block diagram can be broadly divided into two -sections, viz., an amplitude modulated transmitter and a frequency modulated transmitter. Former is used for video modulation whereas latter is used for audio modulation.

Master oscillator in both generates an RF carrier frequency. Generally, a master oscillator generates a sub multiple of carrier and then drives harmonic generators (frequency multipliers) to achieve correct value carrier. Harmonic generators are nothing but class C tuned amplifiers whose output tuned circuit is to tuned to some harmonic of the input signal. In actual practice, master oscillator and harmonic generator are s crated or isolated by a buffer stage to av214Joactrrig of the harmonic generator on the oscillator output. The carrier is then fed to an amplitude modulator in video transmitter and a frequency modulator in audio transmitter. Into-the modulator, the modulation signal is also fed with proper amplitude. Since low-level modulation is employed, the modulating signal is amplified by linear amplifiers up-to the desired degree required for transmission. Video and audio signals on separate carriers are then combined together so as to be fed to the transmitting antenna as on signal. 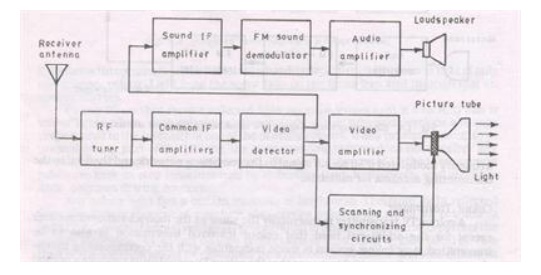 A radio receiver designed to amplify and convert the video and audio radio- frequency signals of a television broadcast that have been picked up by a television antenna; the receiver reproduces the visual image broadcast and the accompanying sound. Television receivers are designed for color or black-and- white operation; both non portable and portable models are produced. Those manufactured in the USSR are capable of receiving signals from television stations transmitting in specifically assigned portions of thevery-high-frequency (VHF) band (48.5–100 megahertz and 174– 230 megahertz; 12 channels) and ultra high-frequency (UHF) band (470– 638 megahertz; several tens of channels).

Television receivers must simultaneously amplify and convert video and audio radio- frequency signals. They are usually designed with a super heterodyne circuit, and versions differ in the methods used to extract and amplify the audio signal. The principal components of a television receiver are shown in Figure1.

The high voltage for feeding the second anode of the kinescope is derived from a special high voltage winding of the line transformer or by rectifying pulses from the transformer; the volt age for the focusing electrode is similarly derived.

The kinescope’s interface includes static and dynamic white balance controls, switches for exting uishingthe electron guns, and regulators for focusing the beams. The demagnetizing circuit for a color kinescopecreates a damped alternating current in a demagnetizing loop that circles the kine scope screen. The current demagnetizes the shadow mask and tube rim, which are made of steel. The audio section consists of an amplifier for the difference frequency, which in the USSR is 6.5 megahertz, a frequency detector for the audio signal, and a low-frequency amplifier from which the audio signal is fed to a high- quality acoustical system, usually composed of several loudspeakers. The power- supply section converts mains voltage into the supply voltages for all components of the television set, including the kinescope and vacuum tube heaters.