The microbial population of freshwater is strongly influenced by the presence or absence of oxygen and light.

The microbiology of freshwater

The microbial population of freshwater is strongly influenced by the presence or absence of oxygen and light. A body of water such as a pond or lake is stratified into zones (Figure 16.5), each having its own characteristic microflora, determined by the 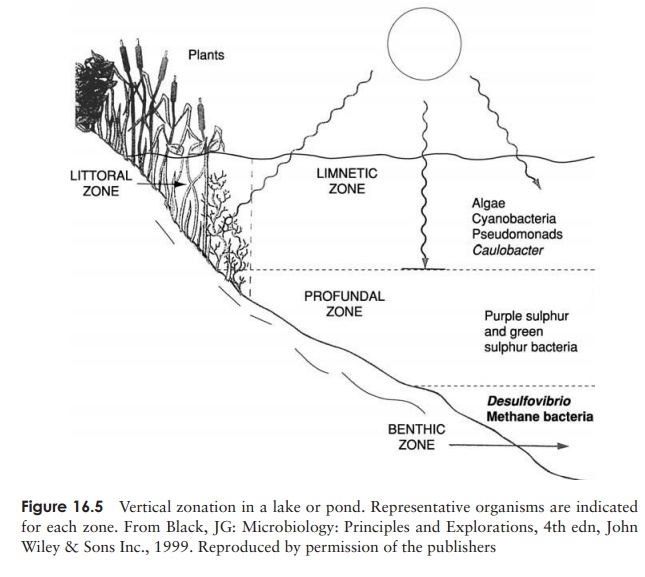 availability of these factors. The littoral zone is the region situated close to land where the water is sufficiently shallow for sunlight to penetrate to the bottom. The limnetic zone occupies the same depth, but is in open water, away from the shore. The profun-dal zone occupies deeper water, where the sun is unable to penetrate, and finally the benthic zone comprises the sediment of mud and organic matter at the bottom of thepond or lake.

Oxygen is poorly soluble in water (9 mg/l at 20 ◦ C), so its availability is often a limiting factor in determining the microbial population of a body of water. Oxygen availability in lakes and ponds is closely linked to oxygenic photosynthesis and therefore, indirectly, to the penetrability of light. Phototrophs such as algae and blue-greens are limited to those regions where light is able to penetrate. Oxygen is absent or very limited in the benthic zone, where anaerobic forms such as the methanogenic bacteria are to be found. Another factor influencing microbial populations is the organic content of the water; if this is high, the growth of decomposers will be encouraged, which will in turn deplete the oxygen. This is much less of an issue in rivers and streams, where physical agitation of the water generally ensures its continued oxygenation.

The temperature of freshwater ecosystems ranges between extremes (0–90 ◦ C), and microorganisms may be found throughout this range.

Microorganisms play a central role in the purification of wastewaters.