Beneficial effects of microorganisms in the environment

The central role played by microorganisms in the recycling of essential elements on a global scale has already been stressed.

Beneficial effects of microorganisms in the environment

The central role played by microorganisms in the recycling of essential elements on a global scale has already been stressed. Many of their natural activities are exploited by humans for their own benefit. Some form the basis of industrial processes

such as those used in the food and drink industries and while the application of others is essentially environmental. Notable among these is the harnessing of natural processes of biodegradation to treat the colossal volumes of liquid and solid wastes generated by our society. These are reviewed briefly in the following section.

We in the modern Western world are often described as living in a ‘throwaway society’. On average, each of us generates around 2 tonnes of solid waste material per year, and all of this must be disposed of in some way! Most of it ends up in landfill sites, huge holes in the ground where refuse is deposited to prevent it being a hazard. The non-biodegradable components (metals, plastics, rubble, etc.) remain there more or less indefinitely; how-ever, over a period of time biodegradable material (food waste, textiles, paper, etc.) undergoes a decomposition process. The rate at which this happens is dependent on the nature of the waste and the conditions of the landfill, but could take several decades. Aerobic processes give way to anaerobic ones and a significant result of the latter is the generation of methane. Modern landfill sites incorporate systems that remove this to prevent it being a fire/explosion hazard, and may put it to good use as a fuel source.

Many householders separate organic waste items such as vegetable peelings and grass cuttings and use them to make compost. This practice, apart from providing a useful gardening supplement, also substantially reduces the volume of material that has to be disposed of by other means . We have already mentioned the role of microorganisms in the recycling of carbon in the biosphere; these same processes serve to degrade the organic waste, especially the cellulose, resulting in a considerable reduction of the bulk. Fungi and bacteria, particularly actinomycetes, break down the organic matter to produce CO2, water and humus, a relatively stable organic end product. Compost is not really a fertiliser, since its nitrogen content is not high, but it nevertheless provides nutrients to a soil and generally helps to improve its condition. Composting is carried out on a large scale by local authorities using the waste generated in municipal parks and gardens.

The aim of wastewater treatment is the removal of undesirable substances and haz-ardous microorganisms in order that the water may safely enter a watercourse such as a river or stream. Further purification procedures are required before it can be used as drinking water. Wastewater treatment is fundamental to any developed society, and greatly reduces the incidence of waterborne diseases such as cholera. Wastewater may come from domestic or commercial sources; highly toxic industrial effluents may re-quire pre-treatment before entering a water treatment system. Sewage is the term used to describe liquid wastes that contain faecal matter (human or animal).

The effectiveness of the treatment process is judged chiefly by the reduction of the wastewater’s biochemical oxygen demand (BOD). This is a measure of the amount of oxygen needed by microorganisms to oxidise its organic content. A high BOD leads to the removal of oxygen from water, a certain indicator of pollution.

Wastewater treatment usually occurs in stages, the first of which (primary treatment) is purely physical, and involves the removal of floating objects followed by sedimen-tation, a process that removes up to a third of the BOD value. Secondary treatment involves microbial oxidation, leading to a substantial further reduction in BOD. This may take one of two forms, both of which are aerobic, the traditional trickling filter and the more recent activated sludge process (Figure 16.6). In the former, the wastewater is passed slowly over beds of stones or pieces of moulded plastic. These develop a biofilm comprising bacteria, protozoans, fungi and algae, and the resulting treated water has its 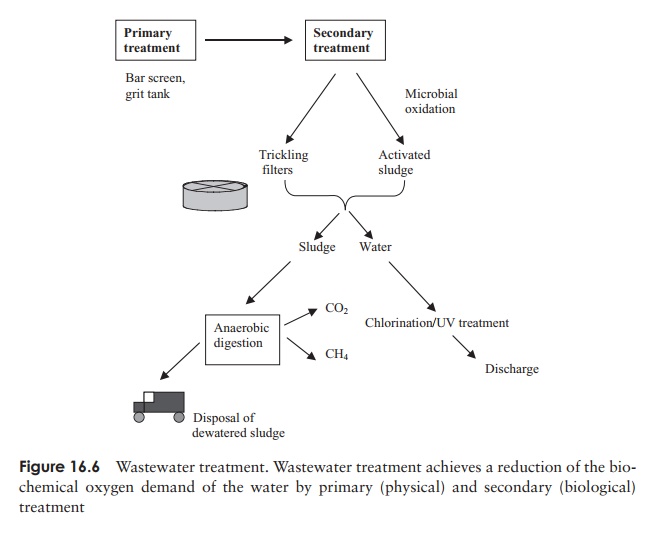 BOD reduced by some 80–85 per cent. Activated sludge plants achieve an even higher degree of BOD reduction. Here the wastewater is aerated in tanks that have been seeded with a mixed microbial sludge. The main component of this is the bacterium Zoogloea, which secretes slime, forming aggregates called flocs, around which other microorgan-isms such as protozoans attach. Some of the water’s organic content is not immediately oxidised, but becomes incorporated into the flocs. After a few hours’ residence in the tank, the sludge is allowed to settle out, and the treated water passes out of the system. Before being discharged to a watercourse, it is treated with chlorine to remove any pathogenic microorganisms that may remain.

The principal operating problem encountered with activated sludge is that of bulking. This is caused by filamentous bacteria such as Sphaerotilus natans; it results in the sludge not settling properly and consequently passing out with the treated water.

Both secondary treatment processes result in some surplus sludge, which undergoes anaerobic digestion, resulting in the production of methane and CO2. The methane canbe used as a fuel to power the plant, and any remaining sludge is dewatered and used as a soil conditioner. Care must be taken in this context, however, that the sludge does not have a high heavy metal content.

Perhaps the biggest problem facing the developed world at the start of the twenty first century is that of pollution of the environment. Our dependence on the products of the chemical industries has resulted in the production of vast amounts of toxic waste mate-rial. One way of dealing with such (mostly organic) waste is to encourage the growth of

bacteria and fungi that are able to oxidise the pollu-tants, a process known as bioremediation. Elsewhere in this book we have seen how microorganisms are able to utilise an enormous range of organic compounds as car-bon sources; the Gram-negative bacterium Burkholde-ria cepacia can use over 100 such compounds. Manyorganisms can metabolise not only naturally occurring substances, but also synthetic ones, making them valu-able allies in the process of bioremediation. Often the most effective microorganisms to use are those found living naturally at the contami-nated site, since they have demonstrated the ability to survive the toxic effects of the pollutant, although in other cases specially adapted or genetically modified bacteria may be introduced (bioaugmentation). Examples of the useof microorganisms include the treatment of toxic waste sites, chemical spills, pesticides in groundwater and oil spills. One of the first successful applications of biore-mediation came in the aftermath of the Exxon Valdez disaster in 1989 when thousands of tons of crude oil were released off the coast of Alaska. Depending on the circumstances, bioremediation procedures may occurin situ, or the contaminated soil or water may be removed to a specialist facility fortreatment.