The roots of almost all plants form mutualistic associ-ations with fungi, known as mycorrhizae, which serve to enhance the uptake of water and mineral nutrients, especially phosphate, by the plants.

The roots of almost all plants form mutualistic associations with fungi, known as mycorrhizae, which serve to enhance the uptake of water and mineral nutrients, especially phosphate, by the plants. The beneficial effect of a mycorrhizal association is particularly noticeable in soils with a poor phosphorus content. In return, the plant supplies reduced carbon in the form of carbohy-drates to the fungi. Unlike other plant–microorganism interactions that occur in the rhizosphere, mycor-rhizal associations involve the formation of a distinct, 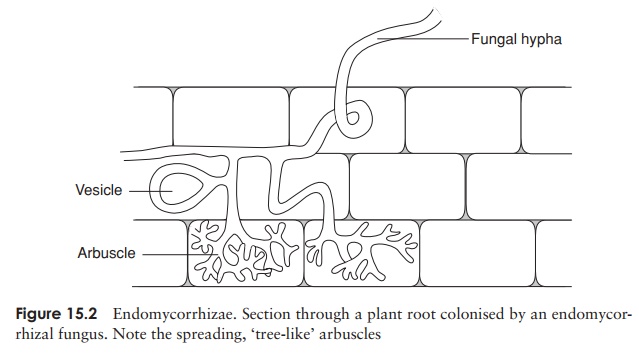 integrated structure comprising root cells and fungal hyphae. In ectomycorrhizae the plant partner is always a tree; the fungus surrounds the root tip, and hyphae spread between (but do not enter) root cells. In the case of the more common endomycor-rhizae, the fungal hyphae actually penetrate the cells by releasing cellulolytic enzymes.Arbuscular mycorrhizae are found in practically all plant types, including ‘lower’ plants (mosses, ferns). They form highly branched arbuscules within the root cells that gradu-ally lyse, releasing nutrients into the plant cells (Figure 15.2). In contrast to pathogenic fungi, mycorrhizal fungi are often rather non-specific in their choice of ‘partner’ plant.

An interesting example of mutualistic association concerns the endophytic (=‘inside plant’) fungus Acremonium.

The ability of crop plants to thrive is frequently limited by the supply of available nitrogen; although there is a lot of it in the atmosphere, plants are unable to utilise it, and instead must rely on an inorganic supply (both naturally-occurring and in the form of fertilisers). As we saw, however, certain bacterial species are able to ‘fix’ atmospheric nitrogen into a usable form. Some of these, notably Rhizobium spp. form a mutualistic relationship with leguminous plants such as peas, beans and clover, converting nitrogen to ammonia, which the legume can incorporate into amino acids. In return, the bacteria receive a supply of organic carbon, which they can use as an energy source for the fixation of nitrogen.

The free-living Rhizobium enters the plant via its root hairs, forming an infection thread and infecting more and more cells (Figure 15.3). Normally rod-shaped, they proliferate as irregularly-shaped bacteroids, densely packing the cells and causing them to swell, forming rootnodules.

Rhizobium requires oxygen as a terminal electron acceptor in oxidative phosphory-lation, but as you may recall, the nitrogenase enzyme, which fixes the nitrogen, is sensitive to oxygen. The right microaerophilic conditions are maintained

by means of a unique oxygen-binding pigment, leghaemoglobin. This is only synthe-sised by means of a collaboration between both partners. Nitrogen fixation requires a considerable input of energy in the form of ATP (16 molecules for every molecule of nitrogen), so when ammonia is in plentiful supply the synthesis of the nitrogenase enzyme is repressed.

Farmers have long recognised the value of incorporating a legume into a crop rotation system; the nodules left behind in the soil after harvesting the crop appreciably enhance the nitrogen content of the soil.

Legumes are not the only plants able to benefit from the nitrogen-fixing capabilities of bacteria. The water fern Azolla, which grows prolifically in the paddy fields of southeast

Asia, has its nitrogen supplied by the blue-green bacterium Anabaena. When the fern dies, it acts as a natu-ral fertiliser for the rice crop. Anabaena does not form root nodules, but takes up residence in small pores in the Azolla fronds. Nitrogen fixation takes place in hetero-cysts, specialised cells whose thick walls slow down the rate at which oxygen can diffuse into the cell, providing appropriate conditions for the oxygen-sensitive nitrogenase.

The alder tree (Alnus spp.) is able to grow in soils with poor nitrogen content due to its association in root nodules with the nitrogen-fixing actinomycete Frankia. The filamentous Frankia solves the problem of nitrogenase’s sensitivity to oxygen by com-partmentalising it in thick-walled vesicles at the tips of its hyphae, which serve the same function as the heterocysts of Anabaena.

Many microorganisms, particularly bacteria and yeasts, are to be found living as harmless commensals on the surface structures (leaves, stem, fruits) of plants.

Plant disease may be caused by viruses, bacteria, fungi or protozoans. These frequently have an impact on hu-mans, especially if the plant affected is a commercially important crop. Occasionally the effecton a human

population can be catastrophic, as with the Irish famine of the 1840s brought about by potato blight. A number of microbial diseases of plants are listed in Table 15.5We have already encountered the soil bacterium Agrobacterium tumefaciens in Chap-ter 12, where we saw how it has been exploited as a means of genetically modifying plants. A. tumefaciens is useful for introducing foreign DNA because it is a natural pathogen of plants, entering wounds and causing crown gall disease, a condition char-acterised by areas of uncontrolled growth, analogous to tumour formation in animals. This proliferation is caused by the expression within the plant cell of genes that en-code the sequence for enzymes involved in the synthesis of certain plant hormones. The genes are carried on the T-DNA, part of an A. tumefaciens plasmid, which integrates into a host chromosome. Also on the T-DNA are genes that code for amino acids called opines. These are of no value to the plant, but are utilised by the A. tumefaciens as a food source.