We review the relatively limited repertoire of compounds available for the treatment of fungal and viral infections.

We review the relatively limited repertoire of compounds available for the treatment of fungal and viral infections.

Fungi are eucaryotes, and therefore are unaffected by those agents which selectively target uniquely procaryotic features such as peptidoglycans and 70S ribosomes. Therein lies the problem: anything that damages fungal cells is likely to damage human cells too.

Polyene antibiotics such as amphotericin and nystatin (both produced by species of Streptomyces) act on the sterol components of membranes; their use is limited, becausehuman cells can also be affected by their action (to use a term we learnt earlier, they have a low therapeutic index). Nystatin is used topically against Candidainfections, while amphotericin B is generally used against systemic infections of fungal origin. The latter substance can have a wide range of serious side-effects, but in some cases infections are so severe that the physician is faced with no alternative. Synthetic compounds such as the imidazoles have a similar mode of action to the polyenes; they are effective against superficial mycoses (fungal infections of the skin, mouth and urino-genital tract). Griseofulvin, a natural antibiotic produced by a species of Penicillium, is another antifungal agent whose use is restricted; it works by interfering with mitosis and not surprisingly has a range of side-effects. Although used to treat superficial infections, it is taken orally.

In spite of the looming threat of resistant strains, there is no doubt that antibiotics have been hugely successful in the control of bacterial diseases. We have, however, been a lot less successful when it comes to finding a treatment for diseases caused by viruses; a quick revision of their modus operandi should make it clear why this is so. Viruses survive by entering a host cell and hijacking its replicative machinery, thus a substance interfering with the virus is likely to harm the host as well. A number of compounds have been developed however, which are able to act selectively on a viral target.

All antiviral agents act by interfering with some aspect of the virus’s replication cycle. A number of such compounds have been found, but only a few have been approved for use in humans.

One of the first antiviral agents to be approved for use was amantidine, which inhibits uncoating of the influenza A virus by preventing the formation of acid conditions in the host cell’s endocytotic vesicles. Itsspecificity for the virus is due to selective binding to M2, a matrix protein. Amantidine’s efficacy is dependent on admin-istration within the early stages of an infection. It can be administered prophylactically, but may have side-effects.

Most antiviral agents target nucleic acid synthesis, usually by acting as base ana-logues. These are molecules that are incorporated into viral nucleotides instead of thenormal deoxynucleosides, disrupting synthesis because DNA polymerase is unable to act on them. The majority of viruses encode their own DNA polymerases, and the base analogues exert their effect by selectively inhibiting these, thus having little effect on that of the host cell. An example is acyclovir, which is an analogue of guanosine; it is converted to the nucleoside triphosphate by the action of thymidine kinase and then in this form acts as a competitive inhibitor of the ‘correct’ version (Figure 14.9). When the acyclovir nucleotide is incorporated into the viral DNA, there is no attachment point for the next nucleotide, so further elongation of the chain is prevented. Acyclovir exerts 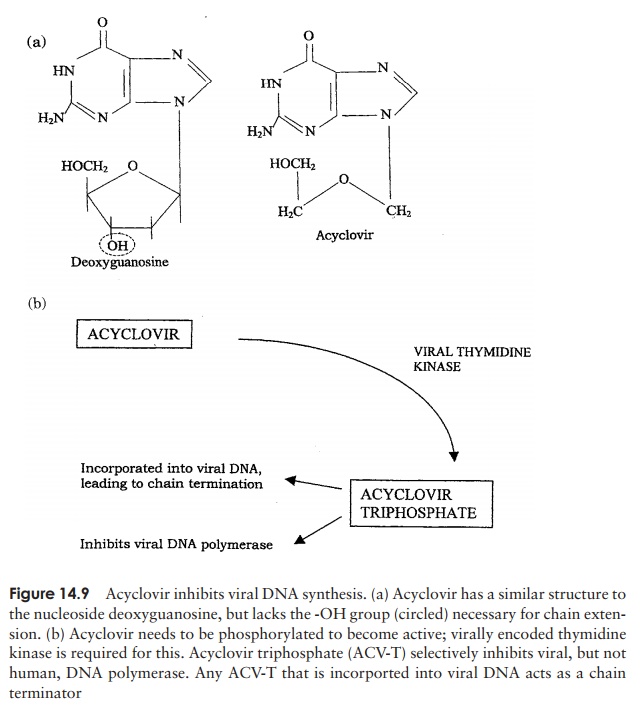 its selective action by having a much higher affinity for the viral polymerase than that of the host. It is used in the treatment of herpes simplex infections; unfortunately, in a sce-nario echoing our experience with antibiotics, resistant strains of herpes simplex virus have been shown to exist. This can be seen as even more serious than the emergence of antibiotic resistant bacteria, because the choice of alternative antiviral agents is so restricted. Vidarabine and azidothymidine (AZT) are other examples of base analogues. AZT (Retrovir) was one of the first substances shown to have an effect against HIV, which it does by preventing cDNA synthesis by the enzyme reverse transcriptase.

Zanamivir was approved by the US Food and Drug Administration (FDA) in 1999. It belongs to a new class of synthetic compounds called neuraminidase inhibitors, which act selectively against both influenza A and B viruses. They block the active site of the enzyme neuraminidase, preventing the release of new virus particles from infected cells, hence reducing the spread of the infection. Zanamivir is inhaled as a fine powder directly into the lungs of patients who are in the early stages of infection.