Termites are insects belonging to the order Isoptera that are found particularly in tropical regions.

Termites are insects belonging to the order Isoptera that are found particularly in tropical regions. Their famous ability to destroy trees and wooden structures such as buildings and furniture is due to a resident population of flagellated protozoans in their hindgut, which are able to break down cellulose. Termites lack the enzymes necessary to do In addition to the protozoans, anaerobic bacteria resident in the hindgut also play an important role in the metabolism of the termites.

Acetogenic and methanogenic species compete for the carbon dioxideand hydrogen produced by the protozoans. The former contribute more acetate for the termite to use, whilst the latter produce significant amounts of methane. Some methanogens exist as endosymbionts within the protozoans.

In other types of termite, no resident population of cellulose digesters is present. Instead, the termite ingests a fungus, which provides the necessary cellulolytic enzymes.

Another example of a host’s staple diet being indigestible without the assistance of res-ident microorganisms is provided by the brightly coloured African bird the honey guide. The honey guide eats beeswax, and relies on a two-stage digestion process by bacteria (Micrococcus cerolyticus) and yeast (Candida albicans) to render it in a usable form.

At the bottom of the deepest oceans, around geothermal vents, live enormous (two metres or more) tube worms belonging to the genus Riftia. These lack any sort of diges-tive system, but instead contain in their body cavity a tissue known as the trophosome. This comprises vascular tissue plus cells packed with endosymbiotic bacteria. These are able to generate ATP and NADPH by the oxidation of hydrogen sulphide generated by 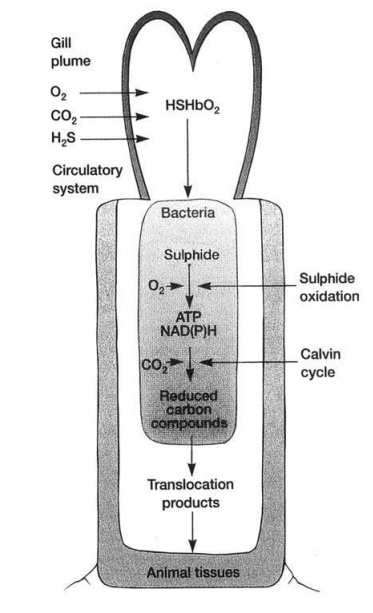 volcanic activity and fix carbon dioxide via the Calvin cycle, providing the worm with a supply of organic nutrients. Hydrogen sulphide is transported to the trophosome from the worm’s gill plume by a form of haemoglobin present in its blood (Figure 15.1).

Warm-blooded animals such as humans play host in their lower intestinal tract to vast populations of bacteria. Although some of these are capable of producing useful metabolites such as vitamin K, most live as commensals, neither benefiting nor harming their host. It could be argued, however, that the very presence of the resident intestinal microflora acts as an important defence against colonisation by pathogens, thus making the association more one of mutualism.

A number of bacteria, viruses, fungi, protozoans and even algae act as pathogens in animals, and cause millions of human deaths every year. A detailed description of these falls outside of the scope of this introductory text, however examples of diseases caused by each group are described.