Microbial associations with other microorganisms

The most familiar example of mutualism between microorganisms is that of lichens, which comprise a close association between the cells of a fungus (usually be-longing to the Ascomycota) and a photosynthetic alga or cyanobacterium.

Microbial associations with other microorganisms

The most familiar example of mutualism between microorganisms is that of lichens, which comprise a close association between the cells of a fungus (usually be-longing to the Ascomycota) and a photosynthetic alga or cyanobacterium. Although many different fungal species may take part in lichens, only a limited number of algae or cyanobacteria do so. Lichens are typically found onexposed hard surfaces such as rocks, tree bark and roofs, and grow very slowly at a rate of a millimetre or two per year. They often occupy particularly harsh environments, from the polar regions to the hottest deserts. The photosynthetic partner usually exists as a layer of cells scattered among fungal hyphae (Figure 15.4). Often unicellular, it fixes carbon dioxide as organic matter, which the heterotrophic fungus absorbs and utilises. The fungal member provides anchorage and supplies inorganic nutrients and water, as well as protecting the alga from excessive exposure to sunlight.

Although lichens are tolerant of extremes of temperature and water loss, they have a well-known sensitivity to atmospheric pollutants such as the oxides of nitrogen and sulphur. Their presence in an urban setting is therefore a useful indicator of air quality. Lichens were used for many years as a source of brightly coloured dyes for the textile industry; they are also used in the perfume industry. The dye used in litmus paper is derived from a lichen, belonging to the genus Roccella.

It should be stressed that lichens are not just a mixture of fungal and algal cells. They are distinctive structures with properties not possessed by either of their component species. Indeed, the relationship between the two partners of a lichen is so intimate that the composite organisms are given taxonomic status. Many thousands of species of lichen have been identified.

As noted in the definitions, a mutualistic relationship need not always be as intimate and essential to both partners as it is in a lichen. The sulphate-reducing bacteria Desulfovibrio, for example, can obtain the sulphate and organic substrates it needs from the photosynthetic purple sulphur bacterium Chro-matium, which in turn receives the carbon dioxide and hydrogen sulphide it requires(Figure 15.5). This protocooperation is not essential to either bacterium, however, as each can satisfy its requirements by alternative means. In another bacterial relationship, 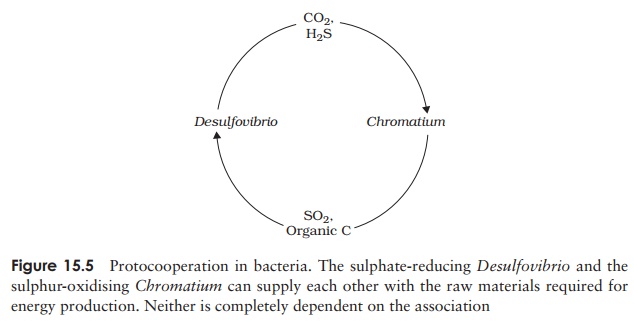 the gut bacteria E. coli and Enterococcus faecalis cooperate to utilise arginine. As shown by Figure 15.6, neither can usefully metabolise this amino acid on its own; however, neither is dependent on the reaction. 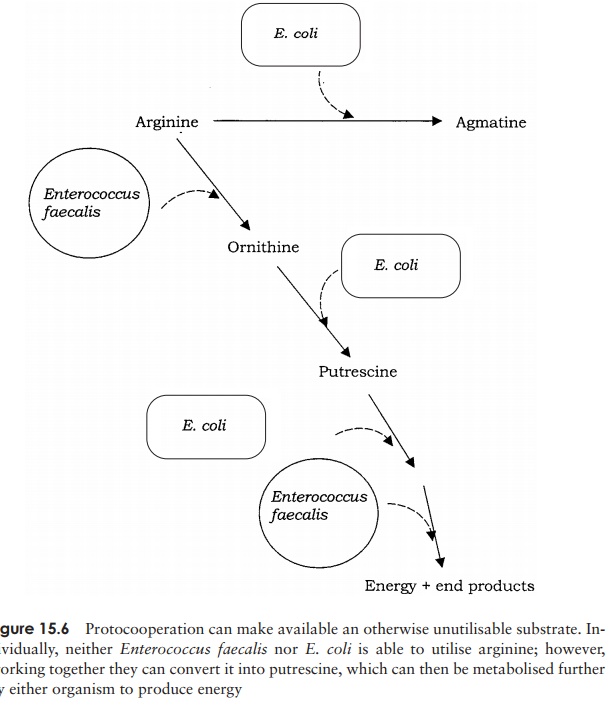 Commensal relationships, in which one partner benefits and neither suffer, are com-mon among microorganisms; such associations are rarely obligatory. A common basis for microbial commensalism is for one partner to benefit as a coincidental consequence of the normal metabolic activities of the other. Thus, one may excrete vitamins or amino acids that can be utilised by the other, or a facultative anaerobe may assist its obligate anaerobe neighbour by removing oxygen from the atmosphere, thus providing the con-ditions for the latter to grow.

The nature of a role played by an organism in a symbiotic relationship may alter according to the prevailing conditions. In a soil already rich in nitrogen, for example, the legume derives no benefit from the Rhizobium, which is then more accurately classed as a parasite, as it continues to utilise organic carbon produced by the plant. In humans, harmless gut symbionts such as E.  coli  can become opportunistic pathogens, and cause infections if intro-duced to an inappropriate site such as a wound or the urinary tract.

A limited number of microorganisms exist by living parasitically inside another. Viruses  are all obligate endoparasites that form an association with a specific host. This host may be microbial: bacteria, fungi, protozoans and algae all act as hosts to their own viruses. Viruses of bacteria are termed bacterio-phages and are only able to replicate themselves inside anactively metabolising bacterial cell. An unusual bacterium belonging to the genus Bdellovibrio also parasitises bac-teria, but as it does not properly enter the cell, is more properly thought of as an ectoparasite or even a predator. Other non-viral parasitism involves bacteria or fungi on protozoans, and fungi on algae and on other fungi.