Microbes in the production of biogas (Gobar gas)

Biogas is a mixture of different gases produced by the breakdown of organic matter in the absence of oxygen.

Microbes in the production of biogas (Gobar gas)

Biogas is a mixture of different gases produced by the breakdown of organic matter in the absence of oxygen. Biogas can be produced from raw materials such as agricultural wastes, manure, municipal wastes, plant material, sewage, food waste, etc., Biogas is produced under anaerobic condition, when the organic materials are converted through microbiological reactions into gas and organic fertilizer. Biogas primarily consists of methane (63 percent), along with CO2 and hydrogen. Methane producing bacteria are called methanogens and one such common bacterium is Methanobacterium. Biogas is devoid of smell and burns with a blue flame without smoke. The Methanogens are also present in anaerobic sludge and rumen of cattle. 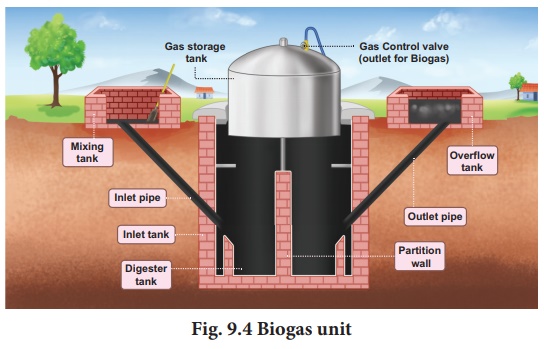 In rumen, these bacteria help in the breakdown of cellulose. The excreta of cattle called dung is commonly called “Gobar”. Gobar gas is generated by the anaerobic decomposition of cattle dung. It consists of methane, CO2 with some hydrogen,nitrogen and other gases in trace amounts.

In a biogas plant, anaerobic digestion is carried out in an air tight cylindrical tank known as digester (Fig. 9.4). It is made up of concrete bricks and cement or steel. Bio-wastes are collected and slurry of dung is fed into this digester. It has a side opening into which organic materials for  digestion  are  incorporated  for  microbial activity.  Anaerobic  digestion  is  accomplished in three stages: solubilisation, acidogenesis and methanogenisis. The outlet is connected to a pipe to supply biogas. The slurry is drained through another outlet and is used as fertilizer. Biogas is used for cooking and lighting. The technology of biogas production was developed in India mainly due to the efforts of Indian Agricultural Research Institute (IARI) and Khadi and Village Industries Commission (KVIC).