Large scale application of chemical insecticides and pesticides have a deleterious effect on the health of human beings and pollute our environment.

Large  scale  application  of  chemical insecticides and pesticides have a deleterious effect on the health of human beings and pollute  our  environment.  Biocontrol  is  a method of controlling pest by use of microbes such as fungi, bacteria, viruses or by naturally occurring substances derived from plants and  animals.  The  use  of  a microbes or other biological agents to control a  specific pest is called a biopesticide.

Biopesticides are used to control insect pests. The lady bird beetle and dragonflies are useful to control aphids and mosquito larvae respectively. soil dwelling bacterium which is commonly used as a biopesticide and contains a toxin called cry toxin (Fig. 9.5). Scientists have introduced this toxin producing genes into plants and have raised genetically engineered insect resistant plants. E.g. Bt-cotton.

During  sporulation Bacillus thuringiensis produces crystal proteins called Delta-endotoxin which is encoded by cry genes. Delta-endotoxins have specific activities against the insects of the orders Lepidoptera, Diptera, Coleoptera and Hymenoptera. When the insects ingest the toxin crystals their alkaline digestive tract denatures the  insoluble  crystals  making  them  soluble. The cry toxin then gets inserted into the gut cell membrance and paralyzes the digestive tract. The insect then stops eating and starves to death.

Weedicides are substances, which destroy weeds withoutharming the useful plants. Bioweedicides are compounds and  secondary metabolites derived from microbes such as fungi, bacteria or protozoa. The first bioherbicide developed in 1981 was  a Mycoheribicide derived from the fungus Phytophthora  palmivora.  It  controls  the growth of strangler vine in citrus crops. Trichoderma species are free living fungi that are very common in the root ecosystem. They are effective biocontrol agents for several plant pathogens. Buculoviruses are pathogens that attack insects and other arthropods. 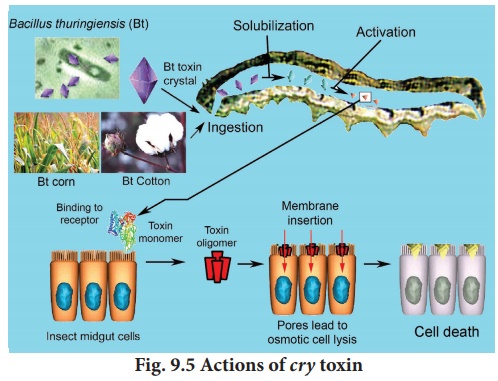 The genus Nucleopolyhedrovirus is used as a biocontrol agent. These viruses are species specific and have narrow spectrum insecticidal applications.

Biofertilisers are formulation of living microorganisms that enrich the nutrient quality of the soil. They increase physico – chemical properties of soils such as soil structure, texture, water holding capacity, cation exchange capacity and pH by providing several nutrients and sufficient organic matter. The main sources of biofertilisers are bacteria, fungi and cyanobacteria. Rhizobium is a classical example for symbiotic nitrogen fixing bacteria. This bacterium infects the root nodules of leguminous plants and fixes atmospheric nitrogen into organic forms. Azospirillum and Azotobacter are free living bacteria that fix atmospheric nitrogen and enrich the nitrogen content of soil.

A symbiotic association between a fungus and the roots of the plants is called mycorrhiza. The fungal symbiont in these associations absorbs the phosphorus from soil and transfers to the plant. Plants having such association show other benefits such as resistance to root-borne pathogens, tolerance to salinity, drought, enhances plant growth and developments. For example, many members of the genus Glomus form mycorrhiza. Cyanobacteria (or) blue green algae (BGA) are prokaryotic free-living organisms which can fix nitrogen. Oscillatoria, Nostoc, Anabaena, Tolypothrix are well known nitrogen fixing cyanobacteria. Their importance is realized in the water logged paddy fields where Cyanobacteria multiply and fix molecular nitrogen. Cyanobacteria secrete growth promoting substances like indole-3-acetic acid, indole-3-butyric acid, naphthalene acetic acid, amino acids, proteins, vitamins which promotes plant growth and production.

Biofertilisers are commonly used in organic farming methods. Organic farming is a technique, which involves cultivation of plants and rearing of animals in natural ways. This process involves the use of biological materials, avoiding synthetic substances to maintain soil fertility and ecological balance thereby minimizing polluteon and wastage.