Sewage is the waste generated every day in cities and towns containing human excreta.

Sewage is the waste generated every day in cities and towns containing human excreta. It contains large amounts of organic matter and microbes, which are pathogenic to humans and are bio-degradable pollutants. Domestic waste consists of approximately 99 percent water, suspended solids and other soluble organic and inorganic substances. Sewage should not be discharged directly into natural water bodies like rivers and streams. Before disposal, sewage should be treated in sewage treatment plants to make it less polluting (Fig. 9.2).

The main objective of a wastewater treatment process is to reduce organic and inorganic components in wastewater to a level that it no longer supports microbial growth and to eliminate other potentially toxic materials.

Microorganisms mainly bacteria and some protozoa play an essential part in the treatment of sewage to make it harmless. Sewage contains pathogenic bacteria. These bacteria must be destroyed in order to prevent the spread of diseases. Sewage treatment is usually performed in the following three stages.

Primary treatment involves the physical removal of solid and particulate organic and inorganic materials from the sewage through filtration and sedimentation. Floating debris is removed by sequential filtration. Then the grit (soil and small pebbles) are removed by sedimentation. All solids that settle form the primary sludge and the supernatant forms the effluent. The effluent from the primary settling tank is taken for secondary treatment.

The primary effluent is passed into large aeration tanks where it is constantly agitated mechanically and air is pumped into it. This allows vigorous growth of useful aerobic microbes into floc (masses of bacteria associated with fungal filaments to form mesh like structures). While growing, these microbes consume the major part of the organic matter in the effluent. This significantly reduces the BOD (Biochemical oxygen demand or Biological oxygen demand). BOD refers to the amount of the oxygen that would be consumed, if all the organic matter in one litre of water were oxidized by bacteria. The sewage water is treated till the BOD is reduced. The greater the BOD of the waste water more is its polluting potential.

Once the BOD of sewage water is reduced significantly, the effluent is then passed into a settling tank where the bacterial “flocs” are allowed to sediment. This sediment is called activated sludge. A small part of activated sludge is pumped back into the aeration tank to serve as the inoculum. The remaining major part of the sludge is pumped into large tanks called anaerobic sludge digesters. Here, the bacteria which grow anaerobically, digest the bacteria and the fungi in the sludge. During this digestion, bacteria produce a mixture of gases such as methane, hydrogen sulphide and CO2. These gases form biogas and can be used as a source of energy.

Tertiary treatment is the final process that improves the quality of the waste water before it is reused, recycled or released into natural water bodies. This treatment removes the remaining inorganic compounds and substances, such as nitrogen and phosphorus. UV is an ideal disinfectant for wastewater since it does not alter the water quality – except for inactivating microorganisms. UV is a chemical-free process that can completely replace the existing chlorination system and also inactivates chlorine-resistant microorganisms like Cryptosporidium and Giardia.

National river conservation plan (NRCP) was enacted in 1995 to improve the water quality of the rivers, which are the major fresh water resources in our country. This important assignment taken up under the NRCP includes,

The ministry for environment, forest and climate change has initiated the Ganga action plan and the Yamuna action plan to save the major rivers of the country.

The Ganga action plan was launched on 14th January 1986. The main objective of the programme is to improve the water quality of River Ganges by interception, diversion and treatment of domestic sewage and to identify grossly polluting units to prevent pollution.

The Yamuna Action Plan is a bilateral project between the Government of India and Japan. It was formally launched in April 1993. It was proposed to build large number of sewage treatment plants to discharge treated wastewater into the rivers.

A microbial fuel cell is a bio-electrochemical system that drives an electric current by using bacteria and mimicking bacterial interaction found in nature (Fig. 9.3). Microbial fuel cells work by allowing bacteria to oxidize and reduce organic molecules. Bacterial respiration is basically one big redox reaction in which electrons are being moved around. A MFC consists of an anode and a cathode separated by a proton exchange membrane. Microbes at the anode oxidize the organic fuel generating protons which pass through the membrane to the cathode and the electrons pass through the anode to the external circuit to generate current. 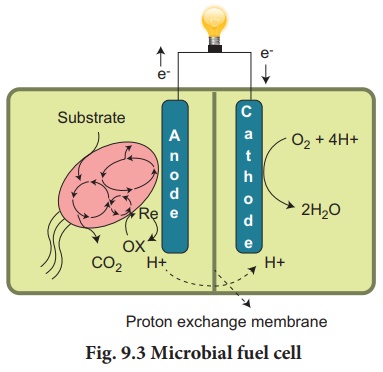