Microbes are used to synthesize a number of products valueble to human beings.

Antibiotics are chemical substances produced by microorganisms which can kill or retard the growth of other disease causing microbes even in low concentration. Antibiotic means “against life”. Antibiotics are used to treat diseases such as plague, meningitis, diphtheria, syphilis, leprosy, tuberculosis etc., Selman Waksman discovered Streptomycin and was the first to use the term “antibiotic” in 1943. found that it was due to a chemical produced by the mould and he named it as penicillin, which was the first antibiotic discovered by Alexander Fleming in 1926 (Fig. 9.1). Penicillin is produced by the fungi Penicillium notatum and Penicillium chrysogenum. It is bactericidal (antibiotics that kill bacteria) in action and inhibits the synthesis of the bacterial cell wall. 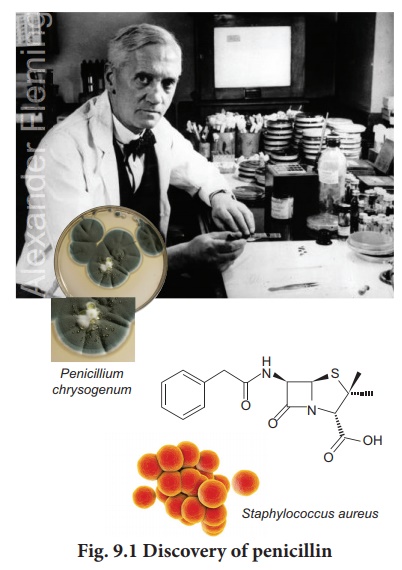 Penicillin is also referred as the “queen of drugs” and its full potential as an effective antibiotic was established much later by Earnest Chain and Howard Florey when they treated the wounded soldiers in World War II with penicillin. Fleming, Chain and Florey were awarded the Nobel prize in 1945 for the discovery of penicillin.

Antibiosis is the property of antibiotics to kill microorganisms.

Tetracycline is a broad spectrum bacteriostatic antibiotic (antibiotics that limit the growth of bacteria) that inhibits microbial protein synthesis. Chlortetracycline is the first antibiotic of this group, isolated from the cultures of Streptomyces aureofaciens. Streptomycin is a broad spectrum antibiotic isolated from the actinomycetes, Streptomyces griseus. It is bactericidal against both gram positive and gram negative bacteria, especially against Mycobacterium tuberculosis. Antibiotics, such as erythromycin, chloromycetin, griseofulvin, neomycin, kenamycin, bacitracin, etc., are also isolated as microbial products.

Antibiotic resistance occurs when bacteria develop the ability to defeat the drug designed to kill or inhibit their growth. It is one of the most acute threat to public health. Antibiotic resistance is accelerated by the misuse and over use of antibiotics, as well as poor infection prevention control. Antibiotics should be used only when prescribed by a certified health professional. When the bacteria become resistant, antibiotics cannot fight against them and the bacteria multiply. Narrow spectrum antibiotics are preferred over broad spectrum antibiotics. They effectively and accurately target specific pathogenic organisms and are less likely to cause resistance. "Superbug" is a term used to describe strains of bacteria that are resistant to the majority of antibiotics commonly used today.

Microbes especially yeast is being used from time immemorial for the production of beverages like wine, beer, whisky, brandy and rum. Wine is among the oldest alcoholic beverages known and is produced by fermentation of fruit juice by yeast. Zymology is an applied science which deals with the biochemical process of fermentation and its practical uses.

Saccharomyces cerevisiae commonly called brewer’s yeast is used for fermenting malted cereals and fruit juices to produce various alcoholic beverages. Wine and beer are produced without distillation, whereas whisky, brandy and rum are obtained by fermentation and distillation.

Oenology is the science and study of wine and wine making. Wine is made from the fermentation of grape juice. Grape juice is fermented by v1arious strains of Saccharomyces cerevisiae into alcohol. Grape wine is of two types, red wine and white wine. For red wine, black grapes are used including skins and sometimes the stems also are used. In contrast white wine is produced only from the juice of either white or red grapes without their skin and stems.

Beer contains 3 to 5 percent of alcohol.

In some parts of South India, a traditional drink called pathaneer is obtained from fermenting sap of palms and coconut trees. A common source is tapping of unopened spadices of coconut. It is a refreshing drink, which on boiling produces jaggery or palm sugar. When pathaneer is left undisturbed for few hours it gets fermented to form toddy with the help of naturally occurring yeast, to form a beverage that contains 4 percent alcohol. After 24 hours toddy becomes unpalatable and is used for the production of vinegar.

Saccharomyces cerevisiae is the major producer of ethanol (C2H5OH). It is used for industrial, laboratory and fuel purposes. So ethanol is referred to as industrial alcohol. Bacteria such as Zymomonas mobilis and Sarcina ventriculi are also involved in ethanol production. The principal substrates for the commercial production of industrial alcohol include molasses or corn, potatoes and wood wastes. The process of ethanol production starts by milling a feed stock followed by the addition of dilute or fungal amylase (enzyme) from Aspergillus to break down the starch into fermentable sugars. Yeast is then added to convert the sugars to ethanol which is then distilled off to obtain ethanol which is upto 96 percent in concentration. The two most common type of biofuels in use today are ethanol and biodiesel, both of them represent the first generation of biofuel technology. Ethanol is often used as a fuel, mainly as a biofuel additive for gasoline.

Biodiesel is a fuel made from vegetable oils, fats or greases. Biodiesel fuel can be used in diesel engines without altering the engine. Pure biodiesel is non-toxic, biodegradable and produces lower level of air pollutants than petroleum-based diesel fuel. The Government of India approved the National Policy on Biofuels in December 2009 and identified Jatropha curcas as the most suitable oilseed for biodiesel production. Pongamia species is also a suitable choice for production of biodiesel.

3. Chemicals, enzymes and other bioactive molecules

Microbes are not only used for commercial and industrial production of alcohol, but also used for production of chemicals like organic acids and enzymes. Examples of organic acid producers are Aspergillus niger for citric acid, Acetobacter aceti for acetic acid, Rhizopus oryzae for fumaric acid, Clostridium butyricum for butyric acid and Lactobacillus for lactic acid.

Yeast (Saccharomyces cerevisiae) and bacteria are used for commercial production of enzymes. Lipases are used in detergent formulations and are used for removing oily stains from the laundry. Bottled juices are clarified by the use of pectinase, protease and cellulase. Rennet can also be used to separate milk into solid curds for cheese making. Streptokinase produced by the bacterium Streptococcus and genetically engineered Streptococci are used as “clot buster” for removing clots from the blood vessels of patients who have undergone myocardial infarction.

Cyclosporin A, an immunosuppressant used in organ transplantation is produced from the fungus Trichoderma polysporum. It is also used for its anti-inflammatory, anti-fungal and anti-parasitic properties. Statins produced by the yeast Monascus purpureus have been used to lower blood cholesterol levels. It acts by competitively inhibiting the enzyme responsible for the synthesis of cholesterol. Recombinant human insulin has been produced predominantly using E. coli and Saccharomyces cerevisiae for therapeutic use in human.