The biochemical components in the cell’s rapid response, adaptation response, and signaling pathways have been found.

The biochemical components in the cell’s rapid response, adaptation response, and signaling pathways have been found. They are phospho-rylation and methylation of several of the proteins necessary for chemo-taxis. First we will discuss methylation. Adler had observed that methionine is necessary for chemotaxis. That is, a methionine auxot-roph grown in the presence of methionine would be chemotactic. Upon removal of methionine, however, the cells remained motile, but could no longer swim up gradients of attractant. Auxotrophs for other amino acids remained chemotactic upon amino acid starvation.

The results discussed above indicate that methionine plays some special role in chemotaxis. Later, when the mechanism of chemotaxis was understood to be modulation in the frequency of runs and tumbles, it was sensible to ask what methionine did. Experiments showed that methionine-starved cells are unable to tumble. The next question was whether methionine starvation destroyed the physical ability to tumble or whether it eliminated the signal to tumble. At first this question seems unapproachable. Genetics, however, came to the rescue. Among the many types of nonchemotactic mutants known are some that inces-santly tumble. The question then was whether these tumbling mutants continued to tumble during methionine starvation. All that was neces-sary to answer this question was to make these tumbling mutants methionine auxotrophs and to starve them of methionine. After this treatment they continued to tumble. This shows methionine is not necessary for tumbling, and therefore that the amino acid must be part of a pathway that signals tumbling to occur.

How might methionine be required? Methionine via S-adenosyl methionine is a common source of methyl groups in metabolism. Most likely, then, the methionine requirement hints that methylation is involved in the tumbling signal. Consistent with this notion is the fact discussed above that the addition of arsenate to cells, which blocks ATP formation and hence S-adenosyl methionine synthesis, also blocks chemotaxis but not motility.

With such clues for the involvement of methylation in chemotaxis, it is natural to look for methylated proteins. The level of methylation of several membrane proteins has been found to be correlated with chemo-taxis behavior for some attractants. The addition of attractant to cells leads to preferential methylation of one of a set of at least four mem-brane proteins, products of genes named tsr, tar, tap, and trg (Fig. 22.12). These proteins are the receptors and signal transducers for some of the attractants and repellents to which E. coli responds. For example the tar product is the receptor for the attractants aspartate, maltose, and many repellents. 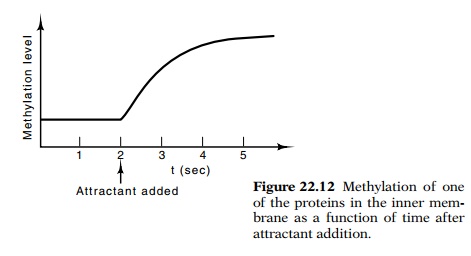 methyl transfer from S-adenosyl methionine. As many as five glutamic acid residues per receptor can be modified as the cells adapt to the continued presence of attractant. The intracellular portion of the pro-tein is highly homologous to other methyl-accepting chemotaxis pro-teins, whereas the N-terminal portion is only weakly homologous to the other chemotaxis receptors.

Increase in the concentration of an attractant generates a conforma-tion change in one of these membrane-bound proteins. This change is ultimately communicated to the flagellar motor. Increasing methylation of the protein decreases its ability to send a signal for smooth swimming or increases its ability to send a signal for tumbling. It is the change in signal strength resulting from change in methylation that produces adaptation.

For methylation to be part of the cell’s “memory,” at least two enzymes are required: one is an enzyme to methylate and the other is an enzyme to demethylate. More precisely, a methyltransferase and a methylesterase must exist. Both of these have been found. They act on the proper membrane proteins and are encoded by genes in the set of eight or nine genes that are required for chemotaxis but are not required for motility.