Sensitive and simple characterization of a cell’s chemotactic ability is necessary for efficient study of the phenomenon.

Sensitive and simple characterization of a cell’s chemotactic ability is necessary for efficient study of the phenomenon. One straightforward assay is the motility plates or swarm plates developed by Adler. In one application, the medium in these plates contains the usual salts neces-sary for cell growth, a low concentration of galactose, and a concentra-tion of agar such that the medium has the consistency of vichyssoise. Five hours after a drop of chemotactic cells is placed in the center, the plate will contain a ring about two centimeters in diameter surrounding many of the cells that remain where they were spotted. The ring expands outward with time and ultimately reaches the edge of the plate. Usually, a second ring also forms and moves behind the first. 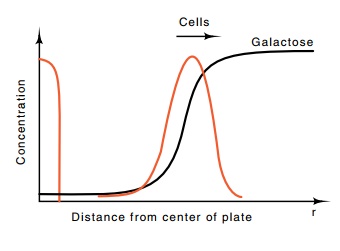 Figure 22.1 The concentra-tions of galactose and cells as a function of distance r from the center of the plate several hours after spotting cells.

gradient, swim toward higher galactose concentrations, and, at the same time, consume the galactose in the new position. Consequently, the cells move outward pursuing and consuming the galactose. The second ring that forms on the galactose plates derives from bacteria utilizing their endogenous energy sources to swim toward oxygen. If tryptone medium is substituted for galactose salts medium, then multi-ple rings form, the first ring from bacteria swimming toward the most active attractant, the second toward a second attractant, and so on. In this case also, one of the rings is formed by bacteria pursuing oxygen.

The capillary tube assay is more sensitive and quantitative than the swarm plate assay. Instead of requiring the bacteria to produce their own gradient of attractant concentration, the gradient is produced by diffusion of the substrate. A short capillary tube is filled with medium containing an attractant and is sealed at one end. The open end is pushed into a drop of medium lacking attractant but containing cells, and the tube is allowed to rest there an hour. As attractant diffuses out of the mouth of the capillary, a gradient of attractant is produced in the region 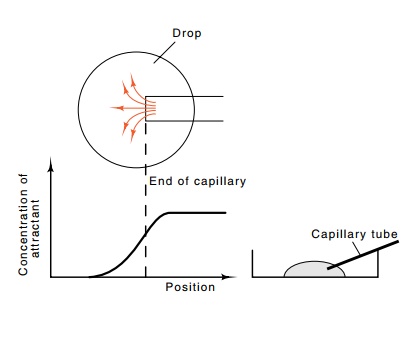 Figure 22.2 Diagram ofthe capillary tube assay in which the capillary is in-serted in a drop of medium in a petri plate, a top view showing diffusion out of a capillary to generate a gra-dient, and the effective concentration as a function of position of the attractant after several hours of diffusion.