The Mechanism of Chemotaxis

As viewed in the microscope, chemotactic bacteria appear to swim smoothly for about 20 bacterial lengths in 1 second, to tumble for about 0.1 second, and then to swim smoothly in another direction. How this run-tumble-run behavior is converted to overall swimming toward increasing concentrations of an attractant was one of the major problems in chemotaxis research.

Berg constructed an elaborate tracking microscope that quantitated the movement of a chemotactic bacterium in three dimensions. This showed that, indeed, the impression obtained from simple visual observation was correct. Following a tumble, a cell’s subsequent run was in a random direction. More important, however, was the behavior of bacteria under conditions simulating the presence of a gradient in attractant. It is difficult to control a gradient in the concentration of an attractant around the cell, but it is likely that a cell detects not a spatial gradient but the change in the concentration of attractant from one time to the next. Therefore, Berg devised a system to vary the concentration of attractant with time.

Alanine aminotransferase catalyzes the interconversion of alanine and α-ketoglutarate to pyruvate and L-glutamate. Both alanine and glutamate are attractants, and therefore the reaction cannot be used to create or destroy total attractant. This problem can be overcome by using a mutant that is blind to alanine but not blind to glutamate. Then the enzyme-catalyzed reaction can be used to vary the concentration with time of attractant surrounding a cell. If alanine, α-ketoglutarate, and alanine aminotransferase are put in the medium bathing the cell

being observed, then the concentration of attractant, glutamate, in-creases with time. In this case, the runs of the bacteria are longer than average. When the glutamate concentration is decreasing as a result of adding glutamate, pyruvate, and alanine aminotransferase to the bath-ing medium, the distribution of run lengths is the same as when attractant concentration remains constant.

The technique of immobilizing a cell via its hook or flagellum has also been highly useful in characterizing chemotaxis responses. After such an immobilization, a microprobe containing attractant or repel-lent can be positioned near a cell, and application of a brief electrical pulse will drive a known amount of the chemical into the medium in the immediate area (Fig. 22.7). If the concentration changes are within the linear response range of the cell, the response to a brief pulse of 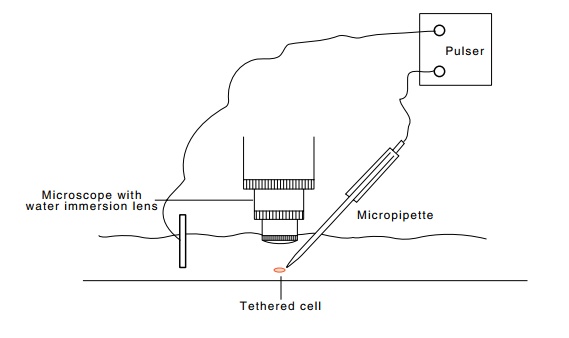 Figure 22.7 A method for generating small impulses of attractant from themicropipette and observing the cell’s responses. The microscope contains additional electronics that record the rotation of the bacterium.

attractant contains all the information necessary to predict the response of a cell to any function of attractant concentration as a function of time. Any other function can be approximated as a series of impulses of appropriate magnitude, and the responses to each of these can be summed. Such a technique of circuit analysis is well known to electrical engineers, but it has not yet been widely applied to biochemical systems.

Figure 22.8 A random walkand the same walk with the run duration increased when in the direction of increasing attrac-tant concentration.