Methods of plant breeding to develop high yielding varieties are given below:

1. Introduction of New Varieties of Plants

It is a process of introducing high yielding varieties of plants from one place to another. Such plants are called as exotic species. These imported plant materials may carry pathogens and pests, hence they are thoroughly tested in a plant quarantine before being introduced to the fields. e.g Phaseolus mungo was introduced from China.

Selection is one of the oldest methods of plant breeding in which individual plants or groups of plants are sorted out from a mixed population based on the morphological characters.

There are three methods of selection. They are

Seeds of best plants showing desired characters are collected from a mixed population. The collected seeds are allowed to raise the second generation. This process is carried out for seven or eight generations. At the end, they will be multiplied and distributed to the farmers for cultivation.

Some common examples for mass selection are groundnut varieties like TMV–2 and AK–10. Its schematic representation is given below. 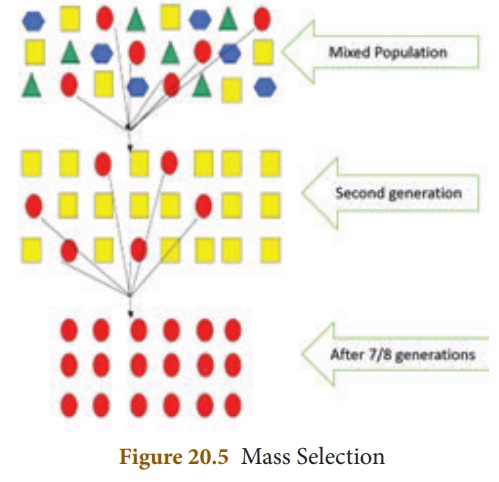 Pureline is “the progeny of a single individual obtained by self breeding”. This is also called as individual plant selection. In pureline selection large numbers of plants are selected from a self-pollinated crop and harvested individually.

Individual plant progenies from them are evaluated separately. The best one is released as a pureline variety. Progeny is similar both genotypically and phenotypically.

A group of plants produced from a single plant through vegetative or asexual reproduction are called clones.

All the plants of a clone are similar both in genotype and phenotype. Selection of desirable clones from the mixed population of vegetatively propagated crop is called clonal selection.

Some achievements of polyploidy breeding are

b. TV-29 (triploid variety of tea) with larger shoots and drought tolerance.

c. Triticale (6n) is a hybrid of wheat and rye. To make this plant fertile polyploidy is induced. It has higher dietary fibre and protein.

d. Raphano brassica is an allotetraploid by colchicine treatment.

Mutation is defined as the sudden heritable change in the nucleotide sequence of DNA in an organism. It is a process by which genetic variations are created which in turn brings about changes in the organism. The organism which undergoes mutation is called a mutant.

The factors which induce mutations are known as mutagens or mutagenic agents. Mutagens are of two types namely physical mutagens and chemical mutagens.

Some achievements of mutation breeding are

b. Atomita 2 rice with saline tolerance and pest resistance

Hybridization may be defined as the process of crossing two or more types of plants for bringing their desired characters together into one progeny called hybrid. Hybrid is superior in one or more characters to both parents. Hybridization is the common method of creating genetic variation to get improved varieties.

Triticale is the first man- made cereal hybrid. It is obtained by crossing wheat (Triticum durum, 2n = 28) and rye (Secale cereal, 2n = 14). The F1 hybrid is sterile (2n = 21). Then the chromosome number is doubled using colchicine and it becomes a hexaploid Triticale (2n = 42).

The cycle of crop raising and selection continues till the plants with the desired characters are finally obtained. The development of new varieties is a long-drawn process. Two main aspects of hybridization are to combine the characters of two plants in one plant and to utilize hybrid vigour.