Methods for measuring intake over the longer term

Food frequency questionnaires consist of a list of foods and options to indicate how frequently each food is consumed.

Methods for measuring intake over the longer term

The period of recall depends on the study objec-tives. In the past, most food frequency questionnaires used the preceding year or 6 months as the reference period. Theoretically, this should eliminate the effects of season. In practice, however, respondents tend to answer according to what is in season or available at the time of the study. For example, intake of oranges was found to be higher when interviews were carried out during the citrus season than at other times of the year. Information may be more reliable when recall period is shorter. Recent recommendations are that recall periods should not be longer than 1 month. If annual intakes are required, the food frequency ques-tionnaire must be repeated in different seasons. It is very important that the respondent understands what the recall period is and that only this period should be considered when giving frequencies of intake.

The frequency of consumption is usually indicated by options such as:

● more than once a day

This type of response format requires only that the appropriate columns be marked and is most suitable for self-administered questionnaires. When appropri-ately designed, such questionnaires can be optically scanned, which saves time on data entry and checking procedures (Figure 10.5). 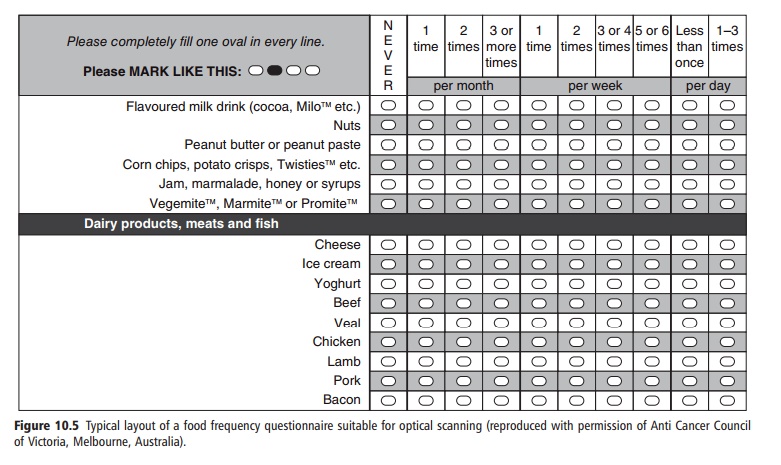 Closed response options, however, treat the fre-quency of consumption as a categorical variable and assume that frequency of consumption is constant throughout the recall period. The choice of categories may bias the results: too few categories may underes-timate frequencies whereas too many may overesti-mate frequencies. Respondents may have difficulty in matching their food intake to the available categories. For example, when food is purchased on a monthly basis food items such as fresh fruit and vegetables may be consumed every day while the stocks last, but, once used up, will not be consumed until purchased in the following month.

An alternative method for recording responses is to provide columns headed as the number of times per day, per week and per month, seldom, and never. From this, the average frequency of consumption and the amount of food consumed per day can be calcu-lated. Table 10.3 shows an extract from such a food frequency questionnaire. The advantage of this response format is that it allows the respondent to describe the frequency of consumption in detail. Responses such as consumption of a food twice a day for 6 days of the week can be recorded. The disadvantages are that clear instructions must be given, making this method more appropriate for interviewer-administered questionnaires than self-administered questionnaires, and the interview takes longer and requires more writing and calcula-tions than the closed format, making more room for errors.

Food frequency questionnaires are mainly used in studies designed to look for associations between food intake and disease or risk of disease, particularly when specific foods rather than the level of consump-tion of a nutrient are thought to be the important factor. Since the cost of administration and respon-dent burden are relatively low, they are suitable for use when sample sizes are large, particularly if a postal method is used. 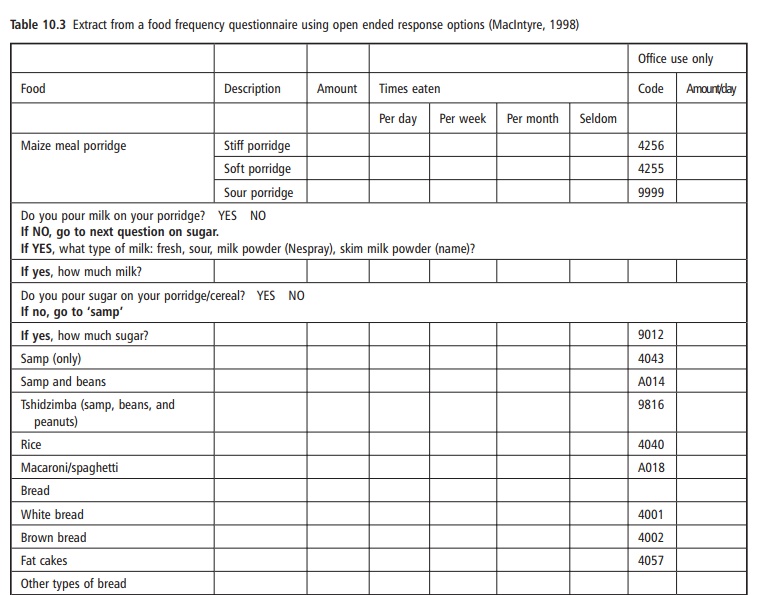 Detailed reviews of the design and evaluation of food frequency methods for use in epidemiological studies are given by Willett (1998) and Cade et al. (2002).

The principal objective of the diet history is to obtain detailed information on the habitual intake of an individual. As first proposed by Burke in the 1940s, the method had several components (Burke 1947):

●      an interview to obtain usual diet

●      a cross-check of this information by food group

●      a 3 day record of food consumed in household measures.

The 3 day record component is now seldom used as a regular component of a diet history. Its purpose originally was as a way of checking the data obtained from the diet history interview. A diet history is usually obtained by an experienced nutritionist by means of an open interview followed by some kind of cross-

check using a standard list of commonly consumed foods. The interview usually begins with a review of the food that was eaten in a specific time-frame (e.g., yesterday) or on a typical day, and then moves on to explore the variations in food intake that occur for each meal over a given period. Information on the usual size of food portions is obtained with the aid of food models or photographs in the same way as for a 24 hour recall. The time-frame for a diet history can range from the previous month to the previous year.

In practical terms it is easier for respondents to reconstruct the immediate past, but the past year is often used to capture seasonal variation. Whatever the time-frame used, it is important for it to be clearly specified. In the literature the term “diet history” is sometimes used loosely to describe any form of diet recall, including the 24 hour recall and self-administered food frequency questionnaires, as well as interviewer-administered recalls of habitual or longer term intake. This broader use can be confusing and is best avoided. The dependence of the diet history on both respondent and interviewer skills may make the results obtained less comparable between individuals than those obtained from other methods, and for this reason it is often considered more appropriate to categorize diet history data (e.g., as high, medium, low) rather than to treat them as intakes expressed in terms of absolute units per day.