Information on food intake can be obtained directly from consumers in a number of different ways.

Irrespective of the method used, the process of obtaining food intake information and converting this to energy and nutrient data is the same. The procedure for measuring food and nutrient intake involves five steps (Figure 10.1).

To convert the information on food intake into nutrient intake, the nutrient content of each food eaten is calculated from food tables as:

and summed for all foods eaten by each individual during the study period. 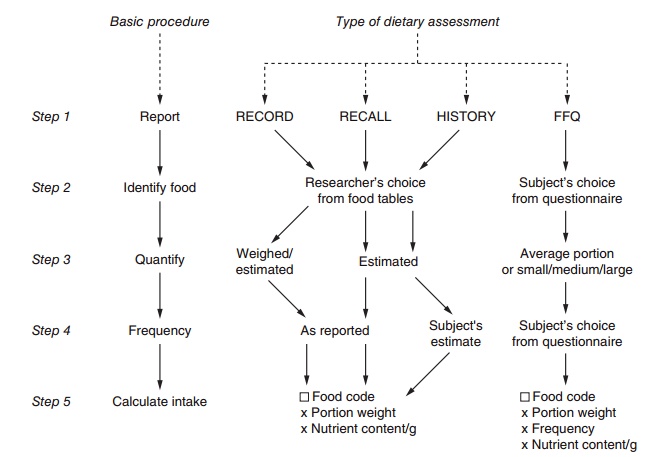 Figure 10.1 The five basic steps in a dietary assessment and the variations according to different methods. FFQ, food frequency questionnaire.

Direct measurement of food intake can be divided into two basic approaches:

2  reports of food intake over a period in the past, which are used to construct typical food patterns: food frequency questionnaires and diet histories.

Records are usually limited to fairly short periods, usually not longer than 7 consecutive days, while recalls may relate to a single period of 24 hours or occasionally 48 hours. Diet histories and food fre-quency questionnaires relate to longer periods and their purpose is to obtain an assessment of habitual intake over the period in question and not a detailed day-to-day recall of what was eaten during that time. When records are kept portions may be either weighed or estimated in terms of standard household measures.

In recalls and questionnaires quantities always have to be estimated. Dimensions, photographs of foods, food models, and, sometimes, actual foods may be used to assist in this process. Each of these approaches has specific advantages and disadvantages and no single method of measuring food intake can be regarded as the ideal method for all situations.

Until recently, weighed intake recorded over a 7 day period was taken as the reference method against which less detailed methods were compared. It has, however, been realized that this method has its limita-tions and that it is not only desirable but also neces-sary to use physiological and biochemical measures to determine whether any method of measuring food intake is actually measuring what it sets out to measure.

The objective of virtually all dietary assessments is to obtain an estimate of the habitual or average long-term intake for the group or the individual of interest. Habitual intake represents what is “usual” in the long term and not simply at a specific moment in time. It is this level of intake that is relevant for maintenance of energy balance and nutrient status, and for the assessment of relationships between nutrient intake and health in the long term. Habitual intake, however, is difficult to measure because food intake varies widely from day to day and, to a lesser extent, from week to week and month to month. Figure 10.2 illus-trates the energy intake of one individual who main-tained a weighed record every sixth day for 1 year. The horizontal line indicates the overall average intake over the year in MJ per day. The open circles show the intake on individual days and the solid circles the average intake over 7 day periods. It is obvious that intake on a single day does not provide a reliable estimate of habitual intake and that even average intake over 7 days can differ by as much as 20% from the overall mean. 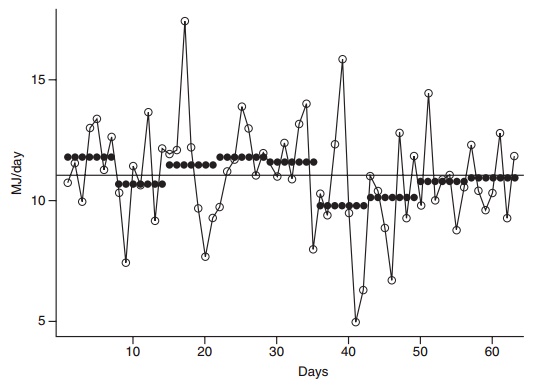 The nature of error

There is not, and probably never will be, a method that can estimate dietary intake without error. This does not mean that we should stop collecting dietary data but rather that dietary data need independent validation. Methods need to be developed to assess the error structure of dietary datasets so that it can be taken into account in analyzing and evaluating the data. Basically, there are two types of error: random error and systematic error.

In contrast, the effects of systematic error cannot be reduced by increasing the number of observations. Systematic error arises from errors that are not ran-domly distributed in the group or in the data from a given individual. Inappropriate nutrient data for some food items will not affect the food intake data for all individuals in the same way. For example, inap-propriate nutrient data will have a greater effect on nutrient intake data of individuals who consume the food in large amounts than on the data of those who consume only small amounts of the food. Systematic error leads to bias in the estimates of intake obtained.

In the laboratory the precision of a method is given by the coefficient of variation (CV) of repeated determi-nations on the same sample made under the same conditions. In the context of dietary studies we determine whether the same method gives the same answer when repeated in the same individu-als, and the terms repeatability and reproducibility are commonly used to describe the precision of a method. It is important to note that it is possible for a method to have high precision (good repeatability) yet not provide an accurate (valid) estimate of intake.

An accurate method is one that measures what the method intends to measure, i.e., the “truth.” In the context of dietary studies the truth represents the actual intake over the period of the study. For example, a valid diet record is a complete and accurate record of all the food and drink consumed over the period that the record is kept. To be a valid record of habitual intake it also needs to reflect what would have been consumed had the individual not been keeping a record. If the process of recording influ-enced what was eaten then the record is not a valid record of habitual intake, although it may be a true record of actual intake over the period. Similarly, a valid 24 hour recall is a complete and accurate account of all food and drink consumed during the specified period if it reflects all foods and drinks consumed in the amounts that they were actually consumed. It may not, however, be a valid reflection of habitual intake if the items consumed were not typical of the indivi-dual’s usual intake.

Determining the validity of a dietary technique has been impossible in the absence of external markers of intake, except for the 24 hour recall or for individual meals.