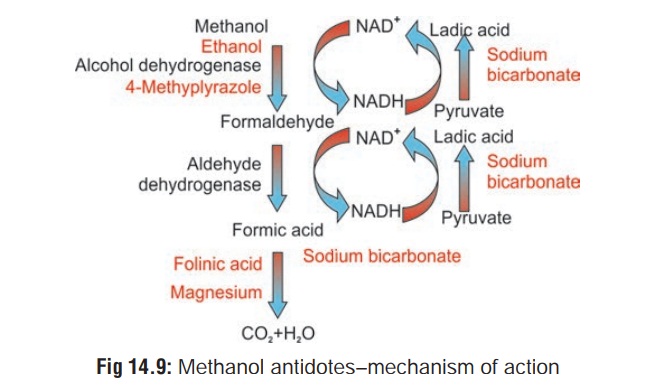 Methanol is the simplest of the primary alcohols and is a colourless, highly polar, flammable liquid. Pure methanol has a faintly sweet odour at ambient tempera- tures; crude methanol may have a repulsive, pungent odour. It has a bitter taste.

·      Denatured spirit (5 to 10%): While denatured spirit most often is a mixture of ethanol (90 to 95%) with methanol (5 to 10%), occasionally other substances may be used instead of the latter, e.g. acetone, aniline dyes, benzene, cadmium, camphor, castor oil, diethyl phthalate, ether, petrol, isopro-panol, kerosene, nicotine, pyridine bases, sulfuric acid, or terpineol.

■■   Methanol is rapidly absorbed through the skin, respira-tory tract and gastrointestinal tract. Peak plasma levels are usually reached within 30 to 60 minutes following inges-tion, although a long latent period (roughly 18 to 24 hours) usually is seen before toxic symptoms develop.

■■   In the liver, methanol is metabolised to formaldehyde (by alcohol dehydrogenase) and then to formic acid (by aldehyde dehydrogenase) which is responsible for retinal toxicity as well as metabolic acidosis.

■■   There are two pathways for metabolism of formic acid, oxidation via the catalase-peroxidase system, or metabo-lism by the tetrahydrofolic acid-dependant one-carbon pool which is catalysed by 10 -formyl-tetrahydrofolate synthetase. Since metabolism is slow, significant levels of methanol can be found in the body for up to seven days after ingestion.

·      Symptoms may be delayed for 12 to 24 hours (Range: 1 to 72 hours). The earliest manifestations include vertigo, headache with stiff neck (meningismus), nausea, vomiting, and abdominal pain. 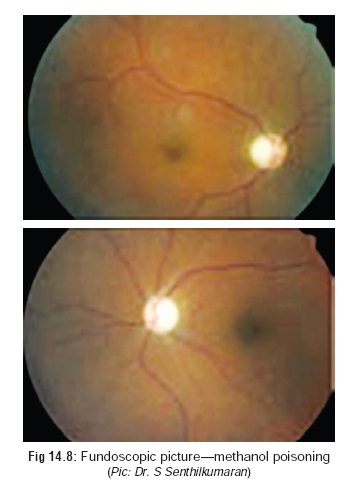 ·      Metabolic acidosis (high anion gap) is usually severe. A pH of less than 7.0 and bicarbonate less than 10 mEq/L are not uncommon following significant intoxication. The onset of acidosis may be delayed up to 18 to 48 hours, especially if ethanol has also been ingested. Therefore, the absence of acidosis does not rule out a significant methanol ingestion.

·      Other features include tachycardia, hypotension, and hypo-thermia. Convulsions are a late feature and may be followed by coma.

·      Hypomagnesaemia, hypokalaemia, and hypophosphataemia have been reported.

·      Cause of death is usually respiratory failure, which may precede the cessation of heart beat by several minutes. In fatal methanol poisoning cases, marked sinus bradycardia may develop with widening of the pulse pressure. Further, severe hypotension, requiring fluid and vasopressor therapy, occurs terminally in severe methanol intoxications.

·              Obtain CBC, electrolytes, urinalysis, and arterial blood gases in symptomatic patients or those with a history of significant exposure. Measure serum pH and electrolytes.

·      CT Scan/MRI—Symmetrical areas of necrosis in the putamen of the brain are a classic finding in cases of acute lethal methanol toxicity. However, these findings are also present in other conditions, such as Wilson’s disease and Leigh’s disease, and are not pathognomonic for methanol poisoning.

·      Ipecac-induced emesis is not recommended because of the potential for CNS depression.

·      Activated charcoal does not adsorb significant amounts of methanol. Its use in the face of ingestion may be indicated to prevent absorption of co-ingested substances. 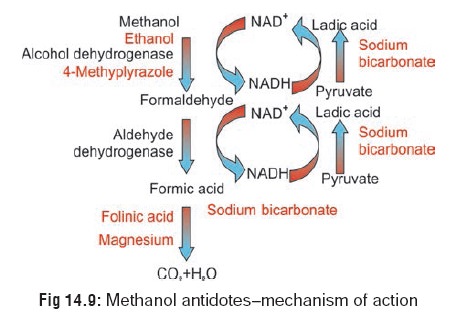 This competitive effect of ethanol gains more time for excretion of unchanged methanol from the body, and it also inhibits the formation of methanol metabolites that produce severe acidosis. Formic acid is metabolised to carbon dioxide and water via a folate dependant system.

»»Preparation from absolute ethanol: If single use vials of pyrogen free absolute ethanol are not available, tax-free bulk ethanol can be used, but it is not pyrogen free. A 0.22 micron filter should be used to minimise particulate matter. A 10% (V/V) solution can be prepared by any of the following methods:

⌂⌂ Remove 50 ml from 1 litre of 5% ethanol solution and replace with 50 ml of abso-lute alcohol.

⌂⌂ Replace 100 ml of fluid from one litre of dextrose 5% in water with 100 ml of absolute ethanol.

⌂⌂ Add 59 ml of absolute ethanol to one litre of 5% ethanol solution.

⌂⌂ Add 112 ml of absolute ethanol to one litre of dextrose 5% in water.

»» If neither of these is practicable, give 125 ml of a distilled alcoholic beverage (gin, vodka, whisky, or rum) orally, diluted in glucose solution or juice, and repeat as required cautiously.

–– Ethanol therapy should be continued until the following criteria are met:

-- Methanol blood concentration, measured by a reliable technique, is less than 10 mg/100 ml.

–– Patients who concurrently ingested ethanol and methanol may have a normal acid-base profile despite a dangerously elevated blood methanol level. Consider implementing the ethanol treatment regimen in these patients until a methanol level can be determined. Determine blood ethanol level before beginning ethanol therapy and modify the loading dose accordingly.

In Western countries, a new antidote has been intro-duced viz., 4 methyl pyrazole (4MP), or fomepizole which does not cause CNS depression (unlike ethanol). Upto 20 mg/kg of 4MP in divided doses have been given for 5 days without any demonstrable toxicity. The usual dose is 15 mg/kg, followed 12 hours later by 10 mg/kg 12th hourly for 4 doses, and then increased to 15 mg/kg 12th hourly for as long as necessary. Fomepizole is easier to use clinically, requires less monitoring, does not cause CNS depression or hypoglycaemia, and may obviate the need for dialysis in some patients.

For convulsions: Attempt initial control with a benzodiaz-epine (diazepam or lorazepam). If seizures persist or recur administer phenobarbitone.

Haemodialysis is very effective in removing methanol, formaldehyde, and formic acid. While ethanol treatment is also quite effective, it is extremely difficult to main-tain therapeutic ethanol levels for long periods of time. Haemodialysis is strongly recommended in patients with acidosis or serum methanol levels of greater than 25 to 50 mg/100 ml. Haemoperfusion is not effective. Peritoneal dialysis and continuous venovenous haemofiltration are less effective.

·      Cyanosis is very prominent, especially in the upper parts of the body.

·      Viscera must be preserved in saturated solution of sodium chloride and not rectified spirit, as in the case of all alcohols.

·              In addition to the routine viscera, it is advisable to preserve one cerebral hemisphere.

Most of the cases of methanol poisoning are accidental arising out of either an alcoholic (deprived of ethanol for any reason) consuming methanol containing products, or because of inten-tional adulteration of ethanol (especially arrack) resulting in mass deaths. The latter are referred to quaintly as “liquor trag-edies” and are reported in Indian newspapers at depressingly regular intervals from all parts of the country.