Bedside test—Place 1 ml of unknown solution plus 1ml of acetic acid and 1 drop of H2SO4 in a test tube and heat gently for 1 minute. A characteristic, strong fruity odour (due to ethyl acetate) is positive for ethanol.

·              Bedside test—Place 1 ml of unknown solution plus 1ml of acetic acid and 1 drop of H2SO4 in a test tube and heat gently for 1 minute. A characteristic, strong fruity odour (due to ethyl acetate) is positive for ethanol.

·              Blood alcohol level—The blood alcohol concentration(BAC) estimated by immunoassay or gas chromatog-raphy is the commonest method employed by labora-tories in India. Although accurate, the results of these tests are often delayed several hours and are not really appropriate in the clinical scenario.

·              BUN, creatinine, liver transaminases, and CPK may be useful in identifying secondary effects, such as hepato-toxicity (chronic ethanol use), respiratory depression, or rhabdomyolysis (if seizures are present).

Alcoholism is a condition in an individual who consumes large amounts of alcohol over a long period of time. It is characterised by

–– a pathological desire for alcohol intake –– black-outs during intoxication

Unfortunately many patients are not diagnosed correctly as alcoholics by their doctors. A high index of suspi-cion is important, particularly in cases where there are repeated consultations for vague symptoms or minor accidents. If in doubt, a drinking history should be taken in which the patient is asked to describe a typical week’s drinking.

––  Consumption should be quantified in terms of units of alcohol. One unit* contains approximately 8 to 10 grams of alcohol and is the equivalent of half a pint of beer, a single measure (30 ml) of spirits, or a glass of table wine. Current opinion suggests that drinking becomes a problem at levels above 21 units/week for men and 14 units/week for women. 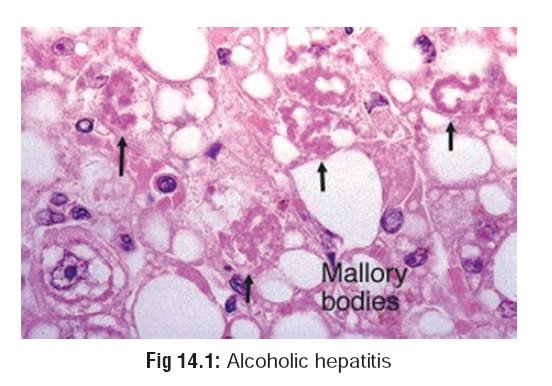 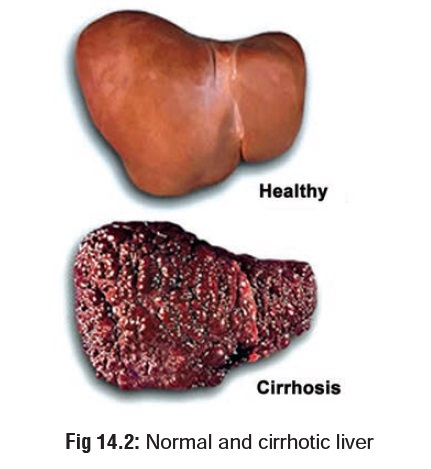 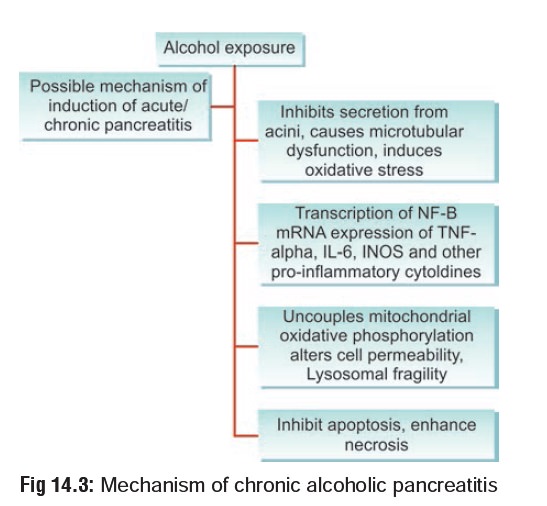 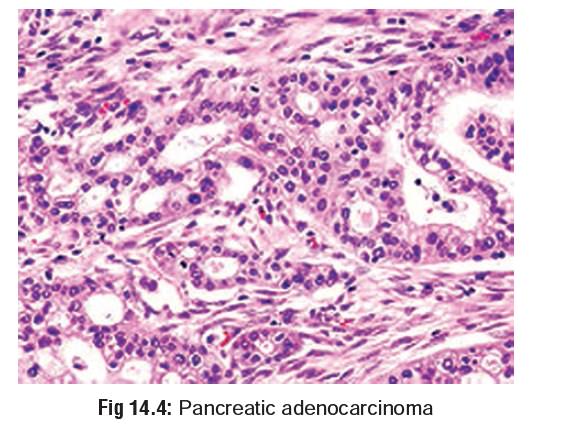 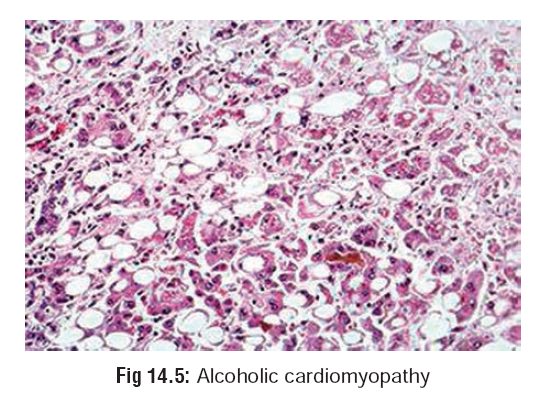 –– Endocrine—hypogonadism and feminisation in males, amenorrhoea, menorrhagia, and infertility in females, pseudo-Cushing syndrome.

–– Teratogenecity—Foetal Alcohol Syndrome (FAS)— this syndrome is characterised by facial dysmor-phias (Fig 14.6) and other congenital abnormalities, prenatal growth retardation, and neurodevelop-mental abnormalities, including developmental delay or mental retardation, in some children of mothers who abused ethanol during pregnancy. 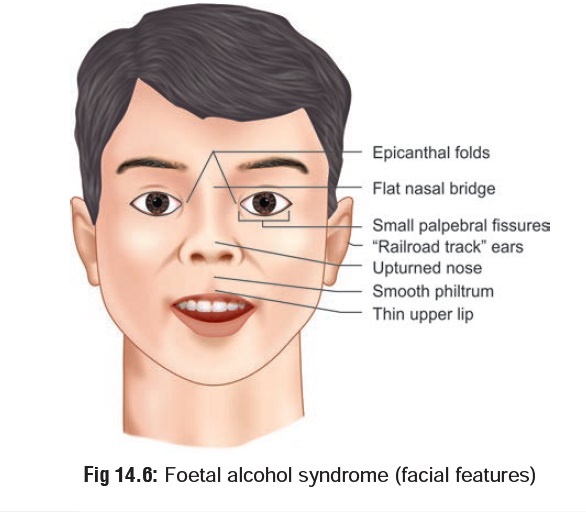 –– Carcinogenicity—alcohol consumption has been associated with various cancers, including liver cancer, oesophageal cancer, breast and prostate cancer, and colorectal cancer.

--Distilled liquors are more strongly linked with oesophageal cancers than wine or beer. This may be due to an irritative effect of alcohol on the digestive tract.

--Studies on the possible relationship between drinking and liver cancer have produced mixed results: some have shown an association while others have not.

--Ethanol consumption has been associated with a linear increase in breast cancer incidence in some studies.

--Ethanol has also been implicated in increasing the risk of cancer of the larynx, oesophagus, mouth, and pharynx in smokers. Ethanol should be regarded as a possible human co-carcinogen.

Withdrawal syndromes: Sudden cessation of alcohol intake in a chronic alcoholic can provoke a withdrawal reaction which may manifest as one of the following: –– Common abstinence syndrome—

-- Features: Objects appear distorted in shape, shadows seem to move, shouting or snatches of music may be heard.

-- Features: Clonic-tonic movements, with or without loss of consciousness.

--  Features: Occurs during withdrawal as well as after episodes of heavy drinking. In many cases there is a preceding history of GI disturbance such as gastritis or pancreatitis which has led to sudden diminution of alcohol intake. To compensate for the loss of carbohydrates and depleted glycogen stores, the body mobilises fat from adipose tissue as an alternative source of energy. There is a corresponding decrease in insulin and an increased secretion of glucagon, catecholamines, growth hormone, and cortisol.

Fatty acids are oxidised and the final product, acetylcoenzyme A is converted to acetoacetate. This in turn is converted to beta-hydroxybu-tyrate because of ethanol-induced low redox state. Volume depletion in these patients inter-feres with the renal elimination of acetoacetate and beta-hydroxybutyrate and contributes to the acidosis. Paradoxically, the arterial pH may be normal due to a compensatory respiratory alkalosis and a primary metabolic alkalosis due to vomiting. Clinical features include drowsi-ness, confusion, tachycardia, and tachypnoea, progressing to Kussmaul breathing pattern and coma.

»»  Blood glucose may be slightly elevated.

»» Since the nitroprusside reaction detectsonly acetone and acetoacetate and not beta-hydroxybutyrate, the assay for ketones is likely to be only weakly positive.

»» There is an elevated anion-gap metabolicacidosis. Serum ketones are markedly elevated.

»»  Correction of volume depletion—infusionof solutions of normal saline with dextrose.

»»  Potassium supplementation may be required. »»  Thiamine (50 to 100 mg) to prevent devel-opment of Wernicke-Korsakoff syndrome.

--  Features: There is a dramatic onset of disor-dered mental activity characterised by clouding of consciousness, disorientation, and loss of recent memory. There are vivid hallucinations which are usually visual, but sometimes audi-tory in nature. There is severe agitation with restlessness and shouting, tremor, and truncal ataxia. Insomnia is prolonged. Autonomic disturbances include sweating, fever, tachy-cardia, hypertension, and dilated pupils. Dehydration and electrolyte disturbances are characteristic. Blood testing shows leucocytosis and impaired liver function.

»»For agitation—diazepam 10 mg IV initially, and then 5 mg every 5 minutes until full control, followed by 5 to 10 mg orally 3 times daily.

»»Thiamine in the usual dose.

»»Correction of fluid and electrolyte imbal-ance.

–– Wernicke-Korsakoff syndrome – This is very rare as a withdrawal phenomenon, and is actually the result of thiamine deficiency due to impoverished diet in an alcoholic.

-- Features: Wernicke’s encephalopathy is the acute form and is characterised by drowsi-ness, disorientation, amnesia, ataxia, periph-eral neuropathy, horizontal nystagmus, and external ocular palsies. It results from damage to mammillary bodies, dorsomedial nuclei of thalamus, and adjacent areas of grey matter. When recovery from Wernicke’s encephalop-athy is incomplete, a chronic amnesic syndrome develops called Korsakoff’s psychosis which is characterised by impairment of memory and confabulation (falsification of memory).

»» For Wernicke’s encephalopathy— adminis-tration of thiamine 50 to 100 mg IV daily, infused slowly in 500 ml of fluid for 5 to 7 days, and fluid replacement.

–– Indications—If rapidly determined bedside glucose level is less than 60 mg/100ml, or if rapid determi-nation is not available.

––  Precautions—Glucose administration should necessarily be preceded by 100 mg of thiamine IV or IM if chronic alcoholism or malnutrition is suspected, to prevent development of Wernicke’s encephalopathy.

·              A variety of drugs have been tried to hasten the elimi-nation of ethanol or reverse its intoxicating effects, including naloxone, physostigmine, and caffeine. None of them have been proved to be truly effective. Recently, flumazenil (3 mg IV) has been shown to be effective (in experimental studies) in reversing the respiratory depres-sion associated with ethanol ingestion.

·              Haemodialysis can eliminate ethanol 3 to 4 times more rapidly than liver metabolism. May be useful in patients with excessive blood levels, impaired hepatic function and in those whose condition deteriorates in spite of maximal supportive measures. However, it is unusual for dialysis to be necessary to treat even severe ethanol intoxication.

Treatment of withdrawal—apart from the treatment measures outlined earlier (vide supra), the following drugs have also been tried with varying degrees of success:

–– Carbamazepine—It has been shown to be effective in treating alcohol withdrawal, including delirium tremens.

–– Chlormethiazole—It is one of the most popular drugs used for alcohol withdrawal abroad, and is administered in a rapidly reducing dosage over 6 to 7 days. However it is itself associated with a strong abuse potential.

–– Clonidine and gamma-hydroxybutyric acid have also shown promising results in the treatment of withdrawal symptoms. The former is given at a dose of 60 to 180 mcg/hr IV, and the latter 50 mg/ kg, orally.

–– One of the most recent entrants is tiapride, an atyp-ical neuroleptic agent which is a selective dopamine D2-receptor antagonist. But it should be given only as an adjunct while seizures, hallucinosis, etc., are being taken care of by other drugs. It is effective in ameliorating psychologic distress associated with alcohol abstinence. For delirium, the recommended dose is 400 to 1200 mg/day 6th hourly, while the maintenance dose subsequently to help abstain from alcohol should not exceed 300 mg/day.

Aversion therapy—The main aim in the treatment of alcoholism is to gradually wean away the patient from the clutches of ethanol, once the acute manifestations of withdrawal have been taken care of. This process referred to quite loosely as de-addiction or detoxifi-cation, should be undertaken only after admission to a hospital over a period of several days, under close medical supervision. The insatiable craving for alcohol that is often present must be tackled effectively, and

usually requires strongly deterrent measures. Many methods have been tried in this connection, and one of the more succesful ways is to administer a drug called disulfiram. It is a disulfide molecule (tetraethylthiuram) which interferes with the oxidative metabolism of ethanol at the acetaldehyde stage, as a result of which acetaldehyde accumulates producing unpleasant symp-toms* (Table 14.4).

-- Ensure that the patient is off alcohol for a minimum period of 12 hours before starting therapy.

-- Administer disulfiram only by the oral route. -- Warn the patient explicitly that while he is on disulfiram, alcohol must not be consumed even in small quantity since it can provoke a severe (and sometimes fatal) reaction. He must also avoid taking medicinal preparations containing alcohol, including topical preparations.

--The usual dose of disulfiram is 250 mg/day which may have to be taken for an indefinite period of time. Such chronic use unfortunately often produces side effects like halitosis (rotten egg odour due to sulfide metabolites), pruritis, headache, drowsiness, impotence, peripheral neuropathies, depression, mania, psychosis, and hepatotoxicity. The patient must be closely monitored and dosage reduced if necessary.

--Other than disulfiram, there are numerous other substances which evoke a similar reaction with ethanol (Table 14.5).

Supportive psychotherapy—More than individualised psychotherapy, it is group therapy which is effective in the long, term management of abstinence. Groups provide an opportunity for resocialisation and a sense of mutual commitment. Self-support organisations such as Alcoholics Anonymous (AA) play an important role. The AA which had its origins in the USA in 1935 now has more than 53,000 groups spread worldwide including India. The only requirement for membership is a “desire to stop drinking”. There is no membership fee and the organisation functions on a self-supporting basis through contributions from the members. Local addresses of AA groups functioning in a given region can be located in the telephone directory of that area. Meetings are generally held once a week and are informal affairs conducted in a friendly atmosphere. Generally two or three speakers share their experi-ences during each session relating to their addiction and recovery.