The barbiturates are derivatives of barbituric acid (2,4,6-triox-ohexahydropyrimidine) and were extensively used as sedative-hypnotics till the 1960s when the benzodiazepines arrived and quickly displaced them.

·              The barbiturates are derivatives of barbituric acid (2,4,6-triox-ohexahydropyrimidine) and were extensively used as sedative-hypnotics till the 1960s when the benzodiazepines arrived and quickly displaced them.

·              Most barbiturates which are used as sedative-hypnotics are administered orally. Intravenous route is usually reserved for management of status epilepticus or induction/mainte- nance of general anaesthesia.

·              Metabolism of most of these drugs occurs by oxidation in the liver resulting in the formation of alcohols, ketones, phenols, or carboxylic acids which are excreted in the urine as such or in the form of glucuronic acid conjugates. Metabolism of barbiturates is more rapid in children and is slower in the elderly.

·              Barbiturates are contraindicated in patients with acute inter-mittent porphyria since they enhance porphyrin synthesis.

·      Pupils are at first constricted, but later dilate because of hypoxia. Hypothermia.

·      Cutaneous bullae (“barb burns”, barbiturate blisters): These are clear, erythematous or haemorrhagic blisters, and occur in various areas of the body, most typically on the hands, buttocks, and between the ankles and knees, usually over pressure points. These lesions have also been reported over non-pressure points, such as dorsal surfaces of fingers and toes, and ocular conjunctiva.

·      Death may occur from respiratory arrest or cardiovascular collapse. Delayed death may be due to acute renal failure, pneumonia, pulmonary oedema, or cerebral oedema.

·      Chronic barbiturate (ab)use is associated with the develop-ment of tolerance which is responsible for decreasing the therapeutic to toxic index. An addict may obtain therapeutic benefit only with 5 to 6 times the normal dose. Abrupt withdrawal results in anorexia, tremor, insomnia, cramps, seizures, delirium, and orthostatic hypotension.

·              Forced alkaline diuresis is said to be particularly useful in phenobarbitone poisoning. However, it should be considered only in severe barbiturate toxicity with life-threatening signs and symptoms. It appears to be less effective than multiple dose activated charcoal, and is generally not the preferred method of elimination enhancement. Forced diuresis is of no value in the treatment of short acting barbiturate intoxication.

·              Haemodialysis or haemoperfusion: Barbiturate elimination can be increased by haemodialysis or charcoal haemop- erfusion. However, these techniques are rarely needed when managing even severe barbiturate intoxication, and should be reserved for patients with haemodynamic compromise refractory to aggressive supportive care. Even though haemoperfusion can clear barbiturates two to four times more rapidly than dialysis, haemoperfusion will not correct electrolyte imbalances, and has been associated with platelet consumption, hypothermia, hypotension, and decreased serum calcium.

·              Withdrawal may be treated by reinstitution of phenobar-bitone, and a programme of gradual reduction over three weeks. A tapering schedule of 10 percent every 3 days has been used successfully.

·              Barbiturate blisters on the dependant parts of skin surface*: buttocks, inner aspects or back of thighs, calves, and fore- arms.

·              The incidence of poisoning with barbiturates has declined dramatically in recent years as a direct result of decline in their use as sedative-hypnotics. However cases do get reported even today, mostly the result of deliberate self-ingestion. This type of (suicidal) poisoning was rampant in the 1960s when these drugs were widely prescribed and consequently abused. One of the most famous cases during this period concerned immortal Hollywood actress Marilyn Monroe (Fig 14.11) who at the end of her short, tempestuous career became hopelessly addicted to alcohol and barbitu- rates. In 1962, at the age of 36, Marilyn Monroe was found dead at home following an overdose of barbiturates. 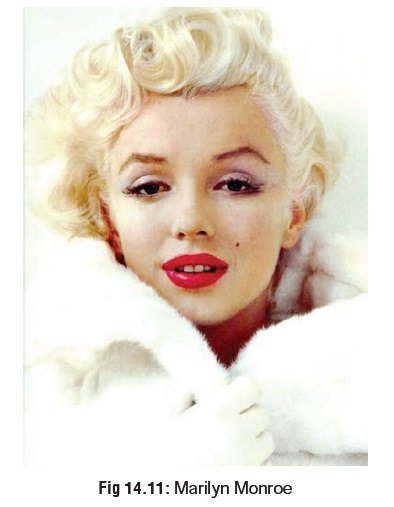 ·              In most parts of the world today, the few barbiturates still used in therapeutics comprise phenobarbitone and thio- pentone. The latter being available only as an injectable preparation has never been popular for committing suicide. Nevertheless there have been reported cases.

·              In India, as per some studies, barbiturates used to account for the maximum number of poison-related fatalities every year right upto the early 1970s, but after that the incidence has plummeted rapidly, and today they account for only a negligible proportion of deaths.

·              Accidental barbiturate poisoning due to inadvertent over- dose is not uncommon among addicts because of their phenomenon of tolerance. But earlier hypotheses that a patient could overdose himself to death by so-called auto- matic behaviour brought on by sleepy confusion have not withstood scientific analysis.

·              Intravenous thiopentone has been used as truth serum to extract confessions during interrogation by inducing a state of drowsy disorientation in the course of which the person may reveal the truth. This controversial practice is closely related to the legitimate psychiatric practice of narcoanalysis used to diagnose certain mental ailments by placing the patient in a reclining position and administering amylobarbitone or some other short-acting barbiturate intra- venously until lateral nystagmus is induced or drowsiness is noted, when the interview is begun and sustained in a gentle fashion with periodic maintenance doses of the drug. This is sometimes referred to as the “Amytal interview”, Amytal being a popular trade name for amylobarbitone in some Western countries.