Clear, colourless liquid with a faint fruity odour, and sweetish burning taste. It is both water soluble and lipid soluble.

·     Ethanol is produced mostly by synthetic production from ethylene. This is mainly by direct hydration process (replacing the earlier method of indirect hydration using sulfuric acid).

·     Fermentation of sugar, cellulose, or starch: Such is the method used in the production of beverage alcohol.

·     Ethanol can also be obtained by the reaction of methanol with synthesis gas at 185°C and under pressure.

·              Beverage ethanol is produced by fermentation of a sugar (from cereal, vegetable, or fruit) with yeast. If cereal is Malt is produced by moistening barley and allowing it to sprout which is then dried, ground, and added to the cereal in water resulting in the formation of mash. Beer is brewed by filtering mash and treating the filtered liquid ( wort) with yeast. Whisky is made by adding yeast directly to the malted mash. Strong alcoholic beverages are distilled after fermentation. 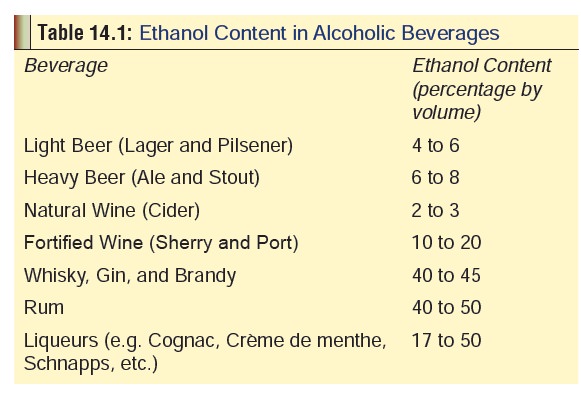 o     Ethanol has been popular in the past as an antiseptic. Surgical spirit used even today is mostly ethanol with a small quantity of methanol (90 to 95% and 5 to 10 % respectively), along with traces of castor oil and methyl salicylate.

o     Ethanol sponging is an effective remedy for hyper-

·              Ethanol is used to extract nucleic acids from whole tissue or tissue culture in virtually all biotechnology processes.

·              In terms of blood alcohol, a level in excess of 400 to 500 mg/100 ml is usually considered to be lethal. However there is a great deal of controversy regarding this since there are case reports of individuals succumbing to much lower blood alcohol concetration (BAC), while there have been reports of survival even with a BAC of over 1000 mg%.

·              Following oral administration, ethanol is rapidly absorbed from the stomach (20%) and small intestine (80%). Maximum or peak alcohol concentration in blood is reached in 30 to 90 minutes following the last drink. Many factors can delay absorption: undiluted ethanol (by provoking pylorospasm), presence of food, delayed gastric emptying due to any cause, and presence of congeners in alcohol. Vapourised ethanol can be rapidly absorbed by inhalation leading to intoxication. Following an equivalent dose of ethanol, women achieve a higher blood alcohol level than do men as a result of decreased gastric alcohol dehydroge-nase activity. It is also a fact that liver damage occurs after consumption of relatively smaller quantities of alcohol in women as compared to men.

·              More than 90% of ethanol ingested is metabolised in the body, and only 5 to 10% is excreted unchanged by the kidneys, lungs, and sweat. Excretion of ethanol by the lungs obeys Henry’s Law :the ratio between the concentration of ethanol in the alveolar air and the blood is constant. This alveolar air/blood constant (1 : 2100) forms the basis for reliably estimating blood alcohol concentration by breath analysis. Metabolism of alcohol is accomplished through 3 pathways in the liver—

1.            Alcohol dehydrogenase pathway (in the cell cytosol): This is the main pathway, by which hydrogen is trans- ferred from ethanol to nicotine adenine dinucleotide (NAD), reducing it to NADH. The ratio of NAD to NADH (redox potential) is therefore dramatically altered which contributes to the development of metabolic abnormalities such as alcoholic ketoaci- dosis, impaired gluconeogenesis, and alterations in lipid metabolism. The acetaldehyde that is formed isconverted to acetic acid by aldehyde dehydrogenase, which in turn is converted to acetylcoenzyme A and enters the Krebs (citric acid) cycle where it is metabolised to carbondioxide and water.

2.            2. Microsomal ethanol oxidising system (MEOS, located on the endoplasmic reticulum): This system The ability of ethanol to stimulate the MEOS system forms the basis for interactions between ethanol and a number of other drugs metabolised by this system. Half-lives of several drugs are shortened in chronic alcoholics because of accelerated metabolism, e.g. phenytoin, methadone, tolbutamide, isoniazid, warfarin, etc. There are also indications that chronic ethanol abuse may potentiate paracetamol hepatotoxicity.

·              Till recently it was postulated that ethanol depresses the CNS by dissolving in the cell’s lipid membrane and causing disorganisation of the lipid matrix (membrane fluidisation). However this mechanism has been challenged by studies which demonstrated that such membrane fluidisation occurred only at ethanol concentrations much above the pharmacologic range, and also that the same changes can be produced by minor temperature changes which produce no signs of intoxication.

o     According to one, ethanol acts by enhancing  gama aminobutyric acid (GABA)-nergic function through

interaction with GABA A receptors and associatedchloride ion channels. However some investigators arenot convinced by this theory.

o     The second theory which appears to be more convincing has to do with N-methyl-d-aspartate (NMDA) ligand-gated, glutamate receptors. NMDA receptors mediateneurotoxicity by increasing permeability to calciumand regulate neuronal long-term potentiation. Studiesdemonstrate that in the acute form of ethanol use,NMDA receptor function is inhibited, while chronic ethanol use results in up-regulation of NMDA receptors.

o     CNS: Ethanol is a CNS depressant but produces some apparently stimulating effects initially because ofdepression of inhibitory control mechanisms in thebrain. First, those mental processes which depend on training and previous experience are affected (memory, concentration, and insight). Later the person becomesexpansive, garrulous and may demonstrate emotionallability with mood swings. There are accompanying sensory and motor disturbances. With severe intoxica- tion there is general impairment of CNS function, and finally coma supervenes. Acute ethanol use at bedtime interferes with normal sleep pattern, and with chronicuse marked fragmentation of sleep occurs.

o     CVS: In moderate doses, ethanol produces tachycardia and vasodilation of cutaneous vessels with resultant warmand flushed skin. However no beneficial increase in coro- nary blood flow occurs; in fact there may be appreciable vasoconstriction which can aggravate existing angina. In spite of this fact, recent studies have indicated that regular use of moderate amounts of ethanol is associated with reduced risk for coronary heart disease.

o     GIT: Ethanol normally stimulates salivary and gastric secretions, but if the concentration is too high (> 40%) they are inhibited, and the GI mucosa becomes congested and inflamed leading to erosive gastritis. Regular intake of excessive amounts of ethanol leads to chronic gastritis, pancreatitis, and cirrhosis of liver.

o     Genito-urinary: Ethanol induces diuresis by inhibition of antidiuretic hormone (ADH). There is a popularmisconception (perpetuated in pulp fiction and films) that ethanol is an aphrodisiac. While it is true that there is often enhanced sexual inclination with (sometimes)aggressive behaviour, this is due to loss of inhibition and restraint rather than the result of sexual stimulation. Objective measurements in human beings of peniletumescence and vaginal pressure show that ethanolactually significantly decreases sexual responsiveness in both men and women. Chronic ethanol consumption can lead to impotence, sterility, testicular atrophy, and gynaecomastia (because of hyperestrogenisation, and reduced production as well as enhanced metabolic inactivation of testosterone). In women, there is increasedpredisposition to breast cancer