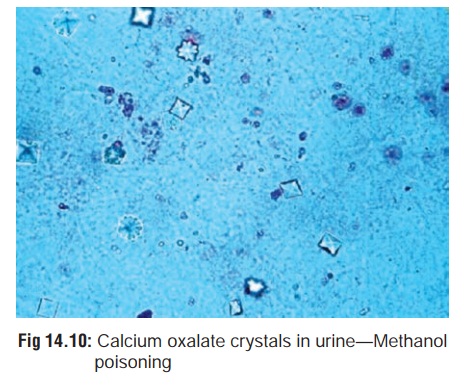 ·              Antifreeze: Ethylene glycol lowers the freezing point ofwater. More than 25% of the ethylene glycol produced is used in antifreeze and coolant mixtures for motor vehicles.

·      It is also used widely for aircraft deicing, and used in condensers and heat exchangers.

·      As a glycerine substitute in commercial products such as paints, lacquers, detergents, and cosmetics.

Ethylene glycol is not absorbed through skin, and because of its low vapour pressure does not produce toxicity upon inhala-tion. It is however rapidly absorbed through the GI tract and is metabolised (more than 80%) to glycoaldehyde, glycolic acid, and oxalic acid which inhibit diverse metabolic pathways in the body, including oxidative phosphorylation. Other metabolites include glyoxylic acid, glyoxal, formic acid, glycine, oxaloma-late, malate, benzoic acid, and hippuric acid.

·              This stage is mainly due to the parent compound itself and is characterised by vomiting, inebriation, lethargy, nystagmus, ataxia, convulsions, and coma.

·              Severe metabolic acidosis with compensatory hyper-ventilation can develop with multiple organ failure in significant poisonings. Tachypnoea and Kussmaul’s respiration may be the first clinical signs of developing metabolic acidosis which, if untreated, can progress and become life-threatening.

·              Delayed onset of adult respiratory distress syndrome (ARDS) has been described after ingestion of ethylene glycol.

·      Osmolal gap: Normal anion gap is 12 to 16 using the formula AG = (Na + K) – (Cl + HCO3), but may vary from laboratory to laboratory.The osmolal gap may be used to estimate the serum ethylene glycol level (in mg/100 ml) by simply multiplying the gap by 6.2 (the molecular weight of ethylene glycol/10). This method assumes that the patient’s serum contains only ethylene glycol (and no other osmoti-cally active substances such as ethanol). 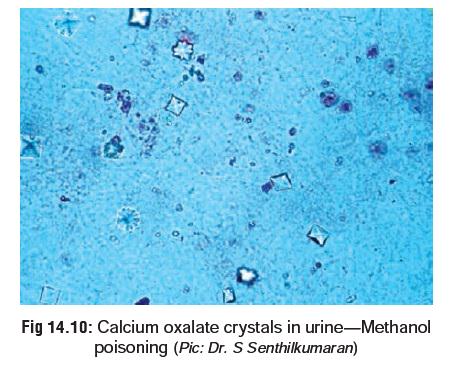 ·      If antifreeze has been ingested, the urine will fluoresce from the fluorescent dye in the product, when examined under Wood’s lamp. A fluorescent dye, sodium fluorescein, is present in many commercial antifreeze products. However, fluorescent urine is not a reliable indicator of ethylene glycol ingestion, due to variations in interpretation of urine fluorescence among observers and the fact that most normal urine specimens exhibit some degree of fluorescence.

–– If the fluorescein content is not listed on the container, a sample of the product should also be examined for fluorescence.

–– Urine samples should be collected as soon as possible after ingestion, preferably within 2 hours and absolutely within 4 hours. A spectrofluoropho-tometer is more sensitive than visual inspection.

–– The pH of the urine should be checked and adjusted to 4.5 or greater before examination.

DO NOT WAIT FOR SYMPTOMS TO APPEAR.

2.           Ethanol is the antidote and must be given IV, (same as for methanol poisoning). It inhibits the metabolism of ethylene tive.

a. Indications: The following criteria have been proposed by the American Academy of Clinical Toxicology as with an antidote (either ethanol or fomepizole):

–– History or strong clinical suspicion of ethylene glycol poisoning and at least 2 of the following criteria:

-- Administer 7.6 ml/kg IV of 10% ethanol (V/V) in dextrose 5% in water over 30 minutes to achieve a blood ethanol concentration of above 100 mg/100 ml (21.7 to 28.2 mmol/L). Some authors recommend a loading dose of 10 ml/ kg to ensure an adequate initial level despite variability in ethanol distribution and ongoing metabolism during the infusion.

–– Dosing to maintain a blood ethanol level of 100 mg/100 ml (21.7 millimoles/litre). Begin main-tenance infusion as soon as the loading dose is infused.

––  Blood ethylene glycol 50 mg/100 ml (8.06 millimoles/L) unless fomepizole is being given and patient is asymptomatic with normal arterial pH ––  Deteriorating vital signs despite intensive supportive therapy