The main memory of virtually every desktop or server computer sold since 1975 is composed of semiconductor DRAMs,. As early DRAMs grew in capacity, the cost of a package with all the necessary address lines was an issue. The solution was to multiplex the 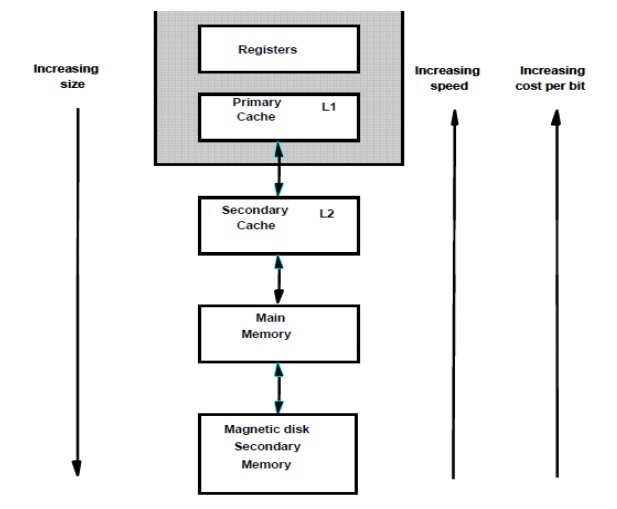 address lines, thereby cutting the number of address pins in half. One half of the address is sent first, called the row access strobe or(RAS). It is followed by the other half of the address, sent during the column access strobe(CAS). These names come from the internal chip organization, since the memory is organized as a rectangular matrix addressed by rows and columns.

In contrast to DRAMs are SRAMs—the first letter standing for static. The dynamic nature of the circuits in DRAM require data to be written back after being read, hence the difference between the access time and the cycle time as well as the need to refresh. SRAMs typically use six transistors per bit to prevent the information from being disturbed when read.

In DRAM designs the emphasis is on cost per bit and capacity, while SRAM designs are concerned with speed and capacity. (Because of this concern, SRAM address lines are not multiplexed.). Thus, unlike DRAMs, there is no difference between access time and cycle time. For memories designed in comparable technologies, the capacity of DRAMs is roughly 4 to 8 times that of SRAMs. The cycle time of SRAMs is 8 to 16 times faster than DRAMs, but they are also 8 to 16 times as expensive.

The first is Read-Only Memory (ROM). ROM is programmed at time of manufacture, needing only a single transistor per bit to represent 1 or 0. ROM is used for the embedded program and for constants, often included as part of a larger chip.In addition to being non-volatile, ROM is also non-destructible; nothing the computer can do can modify the contents of this memory. Hence, ROM also provides a level of protection to the code of embedded computers. Since address based protection is often not enabled in embedded processors, ROM can fulfill an important role.

The second memory technology offers non-volatility but allows the memory to be modified. Flash memory allows the embedded device to alter nonvolatile memory after the system is manufactured, which can shorten product development.

To improve bandwidth, there have been a variety of evolutionary innovations over time.

1.            The first was timing signals that allow repeated accesses to the row buffer without another row access time, typically called fast page mode..

2.              The second major change is that conventional DRAMs have an asynchronousinterface to the memory controller, and hence every transfer involves overhead to synchronize with the controller.This optimization is called Synchronous DRAM( SDRAM).

3.                The third major DRAM innovation to increase bandwidth is to transfer data onboth the rising edge and falling edge of the DRAM clock signal, thereby doubling the peak data rate. This optimization is calledDouble Data Rate(DDR).