A special control unit is provided to allow transfer of a block of data directly between an external device and the main memory, without continuous intervention by the processor. This approach is called direct memory access, or DMA.

A special control unit is provided to allow transfer of a block of data directly between an external device and the main memory, without continuous intervention by the processor. This approach is called direct memory access, or DMA.

DMA transfers are performed by a control circuit that is part of the I/O device interface. We refer to this circuit as a DMA controller. The DMA controller performs the functions that would normally be carried out by the processor when accessing the main memory. For each word transferred, it provides the memory address and all the bus signals that control data transfer.

Since it has to transfer blocks of data, the DMA controller must increment the memory address for successive words and keep track of the number of transfers.

While a DMA transfer is taking place, the program that requested the transfer cannot continue, and the processor can be used to execute another program. After the DMA transfer is completed, the processor can return to the program that requested the transfer. I/O operations are always performed by the operating system of the computer in response to a request from an application program.

The OS is also responsible for suspending the execution of one program and starting another. Thus, for an I/O operation involving DMA, the OS puts the program that requested the transfer in the Blocked state, initiates the DMA operation, and starts the execution of another program. When the transfer is completed, the DMA controller informs the processor by sending an interrupt request. In response, the OS puts the suspended program in the Runnable state so that it can be selected by the scheduler to continue execution. 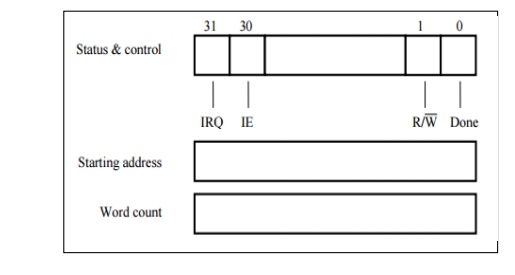 The above figure shows an example of the DMA controller registers that are accessed by the processor to initiate transfer operations. Two registers are used for storing the starting address and the word count. The third register contains status and control flags. The R/W bit determines the direction of the transfer. When this bit is set to 1 by a program instruction, the controller performs a read operation, that is, it transfers data from the memory to the I/O device. Otherwise, it performs a write operation.

A DMA controller connects a high-speed network to the computer bus. The disk controller, which controls two disks, also has DMA capability and provides two DMA channels. It can perform two independent DMA operations, as if each disk had its own DMA controller. The registers needed to store the memory address, the word count, and so on are duplicated, so that one set can be used with each device.

To start a DMA transfer of a block of data from the main memory to one of the disks, a program writes the address and word count information into the registers of the corresponding channel of the disk controller. It also provides the disk controller with information to identify the data for future retrieval. The DMA controller proceeds independently to implement the specified operation.

When the DMA transfer is completed, this fact is recorded in the status and control register of the DMA channel by setting the Done bit. At the same time, if the IE bit is set, the controller sends an interrupt request to the processor and sets the IRQ bit. The status register can also be used to record other information, such as whether the transfer took place correctly or errors occurred.

Memory accesses by the processor and the DMA controllers are interwoven. Requests by DMA devices for using the bus are always given higher priority than processor requests. Among different DMA devices, top priority is given to high-speed peripherals such as a disk, a high-speed network interface, or a graphics display device. Since the processor originates most memory access cycles, the DMA controller can be said to "steal" memory cycles from the processor. Hence, this interweaving technique is usually called cycle stealing.

Alternatively, the DMA controller may be given exclusive access to the main memory to transfer a block of data without interruption. This is known as block or burst mode. Most DMA controllers incorporate a data storage buffer. In the case of the network interface for example, the DMA controller reads a block of data from the main memory and stores it into its input buffer. This transfer takes place using burst mode at a speed appropriate to the memory and the computer bus. Then, the data in the buffer are transmitted over the network at the speed of the network.