The use of peripheral integrated devices simplifies both the hardware circuits and software considerable. The following are the devices used in interfacing of Memory and General I/O devices

The LS138 is a high speed 1-of-8 Decoder/ Demultiplexer fabricated with the low power Schottky barrier diode process. The decoder accepts three binary weighted inputs (A0, A1, A2) and when enabled provides eight mutually exclusive active LOW Outputs (O0–O7).

When the enable is taken LOW the output will be latched at the level of the data that was set up. The eight flip-flops of the 74LS374 are edge-triggered D-type flip flops. On the positive transition of the clock, the Q outputs will be set to the logic states that were set up at the D inputs.

The 74LS245 is a high-speed Si-gate CMOS device. The 74LS245 is an octal transceiver featuring non- inverting 3-state bus compatible outputs in both send and receive directions. The 74LS245 features an Output Enable (OE) input for easy cascading and a send/receive (DIR) input for direction control. OE controls the outputs so that the buses are effectively isolated. All inputs have a Schmitt-trigger action.

These octal bus transceivers are designed for asynchronous two-way communication between data buses. The 74LS245 is a high-speed Si-gate CMOS device. The 74LS245 is an octal transceiver featuring non-inverting 3-state bus compatible outputs in both send and receive directions.

The 74LS245 features an Output Enable (OE) input for easy cascading and a send/receive (DIR) input for direction control. OE controls the outputs so that the buses are effectively isolated. All inputs have a Schmitt-trigger action. These octal bus transceivers are designed for asynchronous two-way communication between data buses.

The memory interfacing circuit is used to access memory quit frequently to read instruction codes and data stored in the memory. The read / write operations are monitored by control

Memory structure and its requirements

The read / write memories consist of an array of registers in which each register has unique address. The size of memory is N * M as shown in figure.

Where N is number of register and M is the word length, in number of bits. As shown in figure(a) memory chip has 12 address lines Ao–A11, one chip select (CS), and two control lines, Read (RD) to enable output buffer and Write (WR) to enable the input buffer.

The internal decoder is used to decoder the address lines. Figure(b) shows the logic diagram of a typical EPROM (Erasable Programmable Read-Only Memory) with 4096 (4K) register. It has 12 address lines Ao – A11, one chip select (CS), one read control signal. Since EPROM does not require the (WR) signal.

EPROM (or EPROMs) is used as a program memory and RAM (or RAMs) as a data memory. When both, EPROM and RAM are used, the total address space 1 Mbytes is shared by them.

In the absolute decoding technique the memory chip is selected only for the specified logic level on the address lines: no other logic levels can select the chip. Below figure the memory interface with absolute decoding. Two 8K EPROMs (2764) are used to provide even and odd memory banks. Control signals BHE and Ao are use to enable output of odd and even memory banks respectively. As each memory chip has 8K memory locations, thirteen address lines are required to address each locations, independently. All remaining address lines are used to generate an unique chip select signal. This address technique is normally used in large memory systems.

In small system hardware for the decoding logic can be eliminated by using only required number of addressing lines (not all). Other lines are simple ignored. This technique is referred as linear decoding or partial decoding. Control signals BHE and Ao are used to enable odd and even memory banks, respectively. Figure shows the addressing of 16K RAM (6264) with linear decoding. The address line A19 is used to select the RAM chips. When A19 is low, chip is selected, otherwise it is disabled. The status of A14 to A18 does not affect the chip selection logic. This gives you multiple addresses (shadow addresses). This technique reduces the cost of decoding circuit, but it gas drawback of multiple addresses 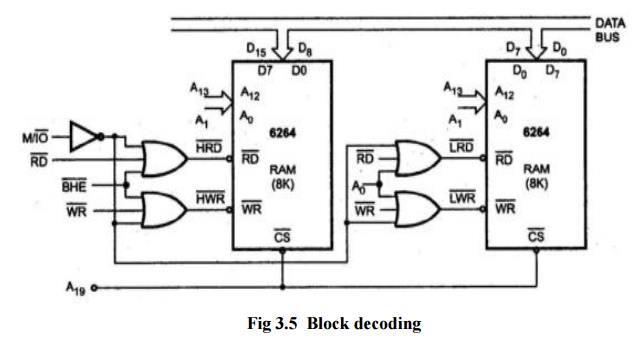 In a microcomputer system the memory array is often consists of several blocks of memory chips. Each block of memory requires decoding circuit. To avoid separate decoding for each memory block special decoder IC is used to generate chip select signal for each block. 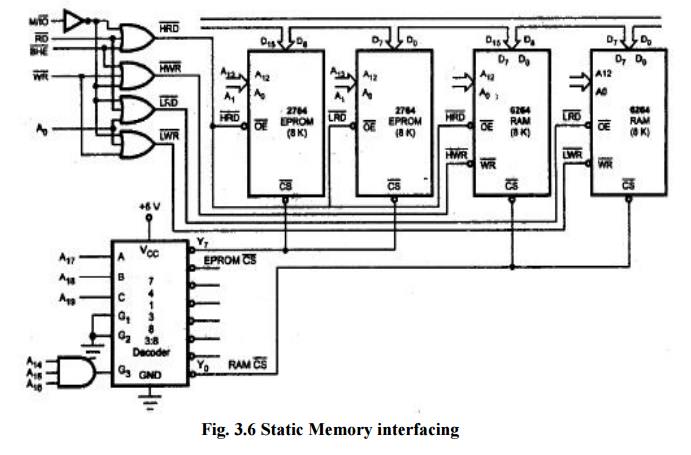 The general procedure of static memory interfacing with 8086 as follows:

3. The remaining address lines of the microprocessor, BHE and Ao are used for decoding the required chip select signals for the odd and even memory banks. The CS of memory is derived from the output of the decoding circuit.

4.  As a good and efficient interfacing practice, the address map of the system should be continuous as far as possible

The basic Dynamic RAM cell uses a capacitor to store the charge as a representation of data. This capacitor is manufactured as a diode that is reverse-biased so that the storage capacitance comes into the picture. This storage capacitance is utilized for storing the charge representation of data but the reverse-biased diode has a leakage current that tends to discharge the capacitor giving rise to the possibility of data loss.

To avoid this possible data loss, the data stored in a dynamic RAM cell must be refreshed after a fixed time interval regularly. The process of refreshing the data in the RAM is known as refresh cycle. This activity is similar to reading the data from each cell of the memory, independent of the requirement of microprocessor, regularly. During this refresh period all other operations (accesses) related to the memory subsystem are suspended.

The advantages of dynamic RAM. Like low power consumption, higher packaging density and low cost, most of the advanced computer systems are designed using dynamic RAMs. Also the refresh mechanism and the additional hardware required makes the interfacing hardware, in case of dynamic RAM, more complicated, as compared to static RAM interfacing circuit.

Output activity transfers data from the microprocessor top the external devices, for example CRT display, 7-segment displays, printer, etc, the devices that accept the data from a microprocessor system are called output devices.

Steps in Interfacing an I/O Device

The following steps are performed to interface a general I/O device with a CPU:

2. Derive a device address pulse by decoding the required address of the device and use it as the chip select of the device.

It is used to send the data to the output device such as display from the microprocessor. The simplest form of the output port is a latch.

Input/output devices can be interfaced with microprocessor systems in two ways:

8086 has special instructions IN and OUT to transfer data through the input/output ports in I/O mapped I/O system. The IN instruction copies data from a port to the Accumulator. If an 8-bit port is read data will go to AL and if 16-bit port is read the data will go to AX. The OUT instruction copies a byte from AL or a word from AX to the specified port. The M/IO signal is always low when 8086 is executing these instructions. In this address of I/O device is 8-bit or 16-bit. It is 8-bit for Direct addressing and 16-bit for Indirect addressing.

In this type of I/O interfacing, the 8086 uses 20 address lines to identify an I/O device. The I/O device is connected as if it is a memory device. The 8086 uses same control signals and instructions to access I/O as those of memory, here RD and WR signals are activated indicating memory bus cycle.