The function of an A/D converter is to produce a digital word which represents the magnitude of some analog voltage or current.

The function of an A/D converter is to produce a digital word which represents the magnitude of some analog voltage or current.

The specifications for an A/D converter are very similar to those for D/A converter:

·        Accuracy and linearity specifications have the same meaning for an A/D converter as they do for a D/A converter.

·        Another important specification for an ADC is its conversion time. - the time it takes the converter to produce a valid output binary code for an applied input voltage. When we refer to a converter as high speed, it has a short conversion time.

The start of conversion signal is a pulse of a specific duration. The process of analog to digital conversion is a slow process, and the microprocessor has to wait for the digital data till the conversion is over.

These tasks of issuing an SOC pulse to ADC, reading EOC signal from the ADC and reading the digital output of the ADC are carried out by the CPU using 8255 I/O ports. The time taken by the ADC from the active edge of SOC pulse (the edge at which the conversion process actually starts) till the active edge of

A number of ADCs are available in the market, the selection of ADC for a particular application is done, keeping in mind the required speed, resolution range of operation, power supply requirements, sample and hold device requirements and the cost factors are considered.

The available ADCs in the market use different conversion techniques for the conversion of analog signals to digital signals.

A general algorithm for ADC interfacing contains the following steps.

1. Ensure the stability of analog input, applied to the ADC.

It may be noted that analog input voltage must be constant at the input of the ADC right from the start of conversion till the end of conversion to get correct results. This may be ensured by a sample and hold

circuit which samples the analog signal and holds it constant for a specified time duration. The microprocessor may issue a hold signal to the sample and Hold circuit. If the

kHz, which is quite low as compared to other converters.

These converters do not need any external zero or full scale adjustments as they are already taken care of by internal circuits. These converters internally have a 3:8 analog multiplexer so that at a time eight different analog inputs can be connected to the chips. Out of these eight inputs only one can be selected for conversion by using address lines ADD A, ADD B and ADD C, as shown. Using these address inputs, multichannel data acquisition systems can be designed using a single ADC.

The CPU may drive these lines using output port lines in case of multichannel applications. In case of single input applications, these may be hard wired to select the proper input. 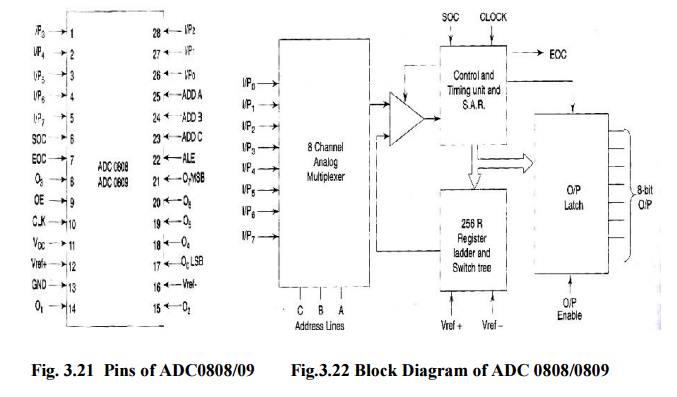 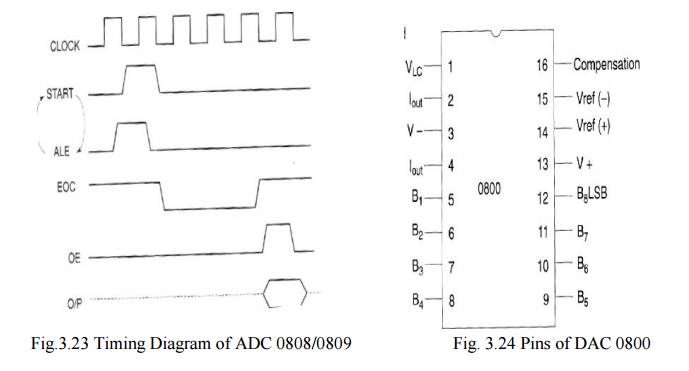 ·     In a compact disk audio player for example a 14-or16-bit D/A converter is used to convert the binary data read off the disk by a laser to an analog audio signal.

1. Resolution: It is a change in analog output for one LSB change in digital input.

2. Settling time: It is the time required for the DAC to settle for a full scale code

i. DAC0800 is a monolithic 8-bit DAC manufactured by National semiconductor.

ii. It has settling time around 100ms