8251 is a Universal Synchronous and Asynchronous Receiver and Transmitter compatible with Intel’s processors.

Data is transmitted only in one direction over a single communication channel. For example, the processor may transmit data for a CRT display unit in this mode.

In duplex mode, data may be transferred between two transreceivers in both directions simultaneously.

In this mode, data transmission may take place in either direction, but at a time data may be transmitted only in one direction. A computer may communicate with a terminal in this mode. It is not possible to transmit data from the computer to the terminal and terminal to computer simultaneously. 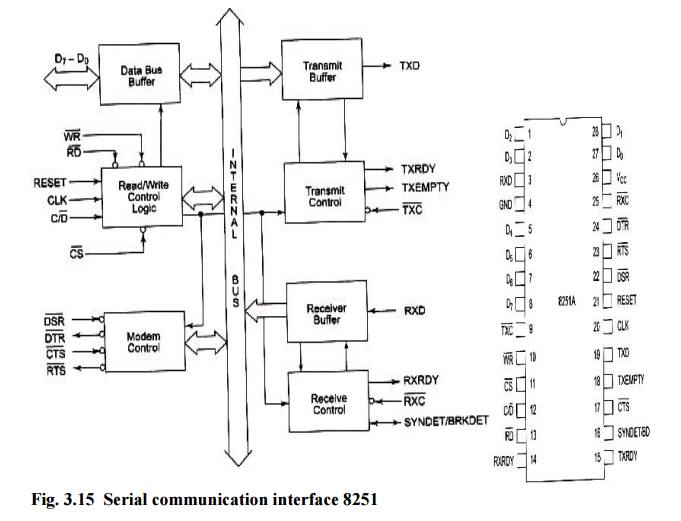 The data buffer interfaces the internal bus of the circuit with the system bus. The read / write control logic controls the operation of the peripheral depending upon the operations initiated by the CPU decides whether the address on internal data bus is control address / data address. The modem control unit handles the modem handshake signals to coordinate the communication between modem and USART.

The transmit buffer is a parallel to serial converter that receives a parallel byte for conversion into a serial signal for further transmission. The receive control unit decides the receiver frequency as controlled by the RXC input frequency. The receive control unit generates a receiver ready (RXRDY) signal that may be used by the CPU for handshaking. This unit also detects a break in the data string while the 8251 is in asynchronous mode. In synchronous mode, the 8251 detects SYNC characters using SYNDET/BD pin.

C / D: (Control Word/Data): This input pin, together with RD and WR inputs, informs the 8251A that the word on the data bus is either a data or control word/status information. If this pin is 1, control / status is on the bus, otherwise data is on the bus.

WR: This is an active-low chip select input of 825lA. If it is high, no read or write operation can be carried out on 8251. The data bus is tristated if this pin is high.

CLK: This input is used to generate internal device timings and is normally connected to clock generator output. This input frequency should be at least 30 times greater than the receiver or transmitter data bit transfer rate.

RESET: A high on this input forces the 8251A into an idle state. The device will remain idle till this input signal again goes low and a new set of control word is written into it. The minimum required reset pulse width is 6 clock states, for the proper reset operation.

TXC (Transmitter Clock Input): This transmitter clock input controls the rate at which the character is to be transmitted. The serial data is shifted out on the successive negative edge of the TXC.

RXC (Receiver Clock Input): This receiver clock input pin controls the rate at which the character is to be received.

RXD (Receive Data Input): This input pin of 8251A receives a composite stream of the data to be received by 8251 A.

RXRDY (Receiver Ready Output): This output indicates that the 8251A contains a character to be read by the CPU.

TXRDY - Transmitter Ready: This output signal indicates to the CPU that the internal circuit of the transmitter is ready to accept a new character for transmission from the CPU.

DSR - Data Set Ready: This is normally used to check if data set is ready when communicating with a modem.

DTR - Data Terminal Ready: This is used to indicate that the device is ready to accept data when the 8251 is communicating with a modem.

RTS - Request to Send Data: This signal is used to communicate with a modem.

TXE- Transmitter Empty: The TXE signal can be used to indicate the end of a transmission mode.

When a data character is sent to 8251A by the CPU, it adds start bits prior to the serial data bits, followed by optional parity bit and stop bits using the asynchronous mode instruction control word format. This sequence is then transmitted using TXD output pin on the falling edge of TXC.

A falling edge on RXD input line marks a start bit. The receiver requires only one stop bit to mark end of the data bit string, regardless of the stop bit programmed at the transmitting end. The 8-bit character is then loaded into the into parallel I/O buffer of 8251. 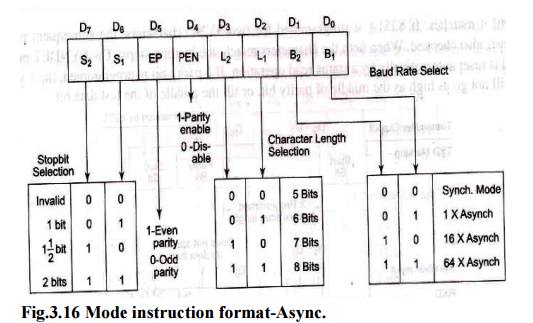 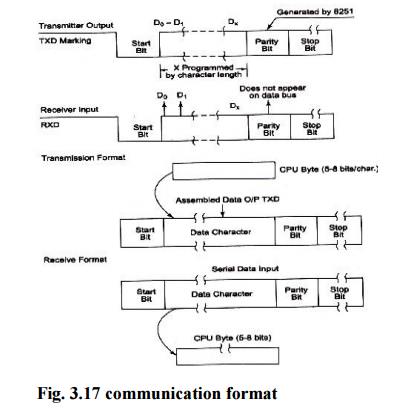 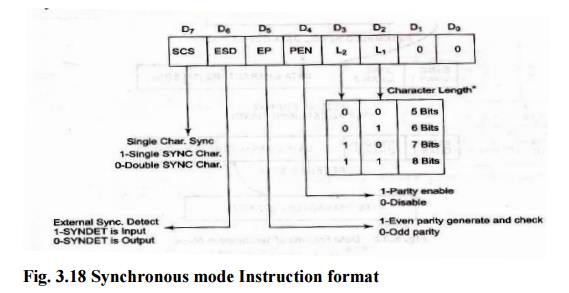 In this mode, the character synchronization can be achieved internally or externally. The data on RXD pin is sampled on rising edge of the RXC. The content of the receiver buffer is compared with the first SYNC character at every edge until it matches. If 8251 is programmed for two SYNC characters, the subsequent received character is also checked. When the characters match, the hunting stops. The SYNDET pin set high and is reset automatically by a status read operation. In the external SYNC mode, the synchronization is achieved by applying a high level on the SYNDET input pin that forces 8251 out of HUNT mode. The high level can be removed after one RXC cycle. The parity and overrun error both are checked in the same way as in asynchronous mode. 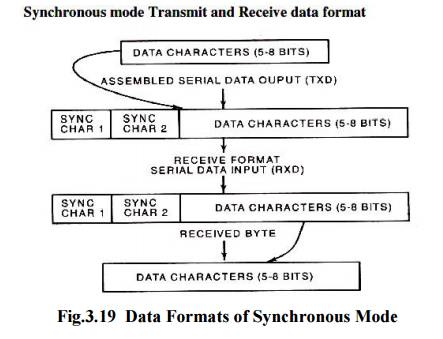 The command instruction controls the actual operations of the selected format like enable transmit/receive, error reset and modem control. A reset operation returns 8251 back to mode instruction format.

This definition is used by the CPU to read the status of the active 8251 to confirm if any error condition or other conditions like the requirement of processor service has been detected during the operation.