Mechanisms of Solute Transport Across Membranes

MECHANISMS OF SOLUTE TRANSPORT ACROSS MEMBRANES

Except for intravenous administration, all routes of drug administration require that the drug be trans-ported from the site of administration into the systemic circulation. A drug is said to be absorbed only when it has entered the blood or lymph capillaries. 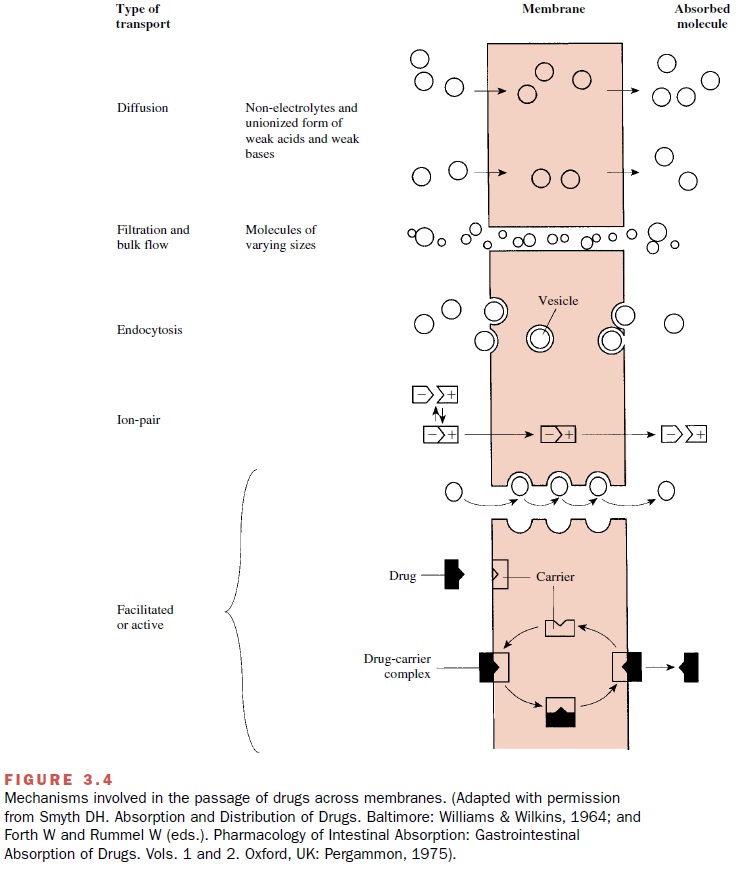 The trans-port of drugs across membranes entails one or more of the following processes: (1) passive diffusion, (2) filtra-tion, (3) bulk flow, (4) active transport, (5) facilitated transport, (6) ion pair transport, (7) endocytosis, and exocytosis (Fig. 3.4). These processes also participate in the transport of substances necessary for cellular maintenance and growth.

Most drugs pass through membranes by passive diffu-sion (down their concentration gradient) of the un-ionized moiety. The rate of diffusion depends mainly on the lipid–water partition coefficient rather than on lipid solubility per se. For example, the central nervous sys- tem depressant barbital is almost completely un-ionized at physiological pH and therefore should be able to cross membranes easily. However, barbital’s lipid–water partition coefficient is sufficiently low that diffusion across membranes proceeds at an extremely slow rate. This slow rate of passage across central nervous system (CNS) membranes largely explains why the time of on-set (latent period) of drug action after barbital adminis-tration is delayed.

The rate of filtration depends both on the existence of a pressure gradient as a driving force and on the size of the compound relative to the size of the pore through which it is to be filtered. In biological systems, the pas-sage of many small water-soluble solutes through aque-ous channels in the membrane is accomplished by fil-tration. The hypothetical diameter of these pores is about 7 Å, a size that generally limits passage to com-pounds of molecular weight less than 100 (e.g., urea, ethylene glycol).

Most substances, lipid soluble or not, cross the capillary wall at rates that are extremely rapid in comparison with their rates of passage across other body mem-branes. In fact, the supply of most drugs to the various tissues is limited by blood flow rather than by restraint imposed by the capillary wall. This bulk flow of liquid occurs through intercellular pores and is the major mechanism of passage of drugs across most capillary en-dothelial membranes, with the exception of those in the CNS.

The energy-dependent movement of compounds across membranes, most often against their concentration gra-dient, is referred to as active transport. In general, drugs will not be actively transported unless they sufficiently resemble the endogenous substances (such as sugars, amino acids, nucleic acid precursors) that are the nor-mal substrates for the particular carrier system. This transport involves the reversible binding of the mole-cule to be transferred to a membrane component (a car-rier) of complementary configuration.

Several mechanisms of active transport have been postulated. One transport model proposes that the drug molecule combines with a specific mobile carrier (Fig. 3.4), probably a protein, on one side of the membrane. The complex formed diffuses across the membrane to the opposite side, where the complex dissociates, thus releasing the drug into the aqueous compartment bor-dering the opposite membrane surface. The carrier pro-tein can then return to its initial side to bind more drug. Another model involves a chainlike arrangement of sites in transport channels to which the drug can bind. The drug would be transferred from one site to another until it had traversed the membrane.

Active transport of a particular substance occurs in one direction only. The number of molecules trans-ported per unit of time will reach a maximum (Tm) once the binding capacity of the carrier becomes saturated. Drugs such as levodopa (for parkinsonism) and α-methyldopa (for hypertension) are actively transported.

Since active transport often requires energy in the form of adenosine triphosphate (ATP), compounds or conditions that inhibit energy production (e.g., iodoac-etate, fluoride, cyanide, anaerobiosis) will impair active transport. The transport of a given compound also can be inhibited competitively by the coadministration of other compounds of sufficient structural similarity that they can compete with the first substance for sites on the carrier protein.

The transfer of drugs by facilitated diffusion has many of the characteristics associated with active transport, including being a protein carrier–mediated transport system that shows saturability and selectivity. It differs from active transport, however, in that no energy input is required beyond that necessary to maintain normal cellular function. In facilitated transport the movement of the transported molecule is from regions of higher to regions of lower concentrations, so the driving force for facilitated transport is the concentration gradient. Although the initial rate of drug transfer will be pro-portional to the magnitude of the concentration gradi-ent, at some point further increases in drug concentra-tion no longer increase the transport rate; that is, Tm has been reached, since the binding sites on the carrier are now completely saturated.

Absorption of some highly ionized compounds (e.g., sulfonic acids and quaternary ammonium compounds) from the gastrointestinal tract cannot be explained in terms of the transport mechanisms discussed earlier. These compounds are known to penetrate the lipid membrane despite their low lipid–water partition coef-ficients. It is postulated that these highly lipophobic drugs combine reversibly with such endogenous com-pounds as mucin in the gastrointestinal lumen, forming neutral ion pair complexes; it is this neutral complex that penetrates the lipid membrane by passive diffu-sion.

Endocytosis involves the cellular uptake of exogenous molecules or complexes inside plasma membrane– derived vesicles. This process can be divided into two major categories: (1) adsorptive or phagocytic uptake of particles that have been bound to the membrane sur-face and (2) fluid or pinocytotic uptake, in which the particle enters the cell as part of the fluid phase. The solute within the vesicle is released intracellularly, pos-sibly through lysosomal digestion of the vesicle mem-brane or by intermembrane fusion (Fig. 3.4).