Absorption of Drugs From the Alimentary Tract

ABSORPTION OF DRUGS FROM THE ALIMENTARY TRACT

In contrast to absorption from the stomach and intes-tine, drugs absorbed from the oral cavity enter the gen-eral circulation directly. Although the surface area of the oral cavity is small, absorption can be rapid if the drug has a high lipid–water partition coefficient and therefore can readily diffuse through lipid membranes. Since the diffusion process is very rapid for un-ionized drugs, pKa will be a major determinant of the lipid– water partition coefficient for a particular therapeutic agent. For instance, the weak base nicotine (pKa 8.5) reaches peak blood levels four times faster when ab-sorbed from the mouth (pH 6), where 40 to 50% of the drug is in the un-ionized form, than from the gastroin-testinal tract (pH 1–5), where the drug exists mainly in its ionized (protonated) form.

Although the oral mucosa is highly vascularized and its epithelial lining is quite thin, drug absorption from the oral cavity is limited. This is due in part to the rela-tively slow dissolution rate of most solid dosage forms and in part to the difficulty in keeping dissolved drug in contact with the oral mucosa for a sufficient length of time. These difficulties may be overcome if the drug is placed under the tongue (sublingual administration) or between the cheek and gum (buccal cavity) in a formu-lation that allows rapid tablet dissolution in salivary se-cretions. The extensive network of blood vessels facili-tates rapid drug absorption. Sublingual administration is the route of choice for a drug like nitroglycerin (glyc-eryl trinitrate), whose coronary vasodilator effects are required quickly in cases of angina. Furthermore, if swallowed, the drug would be absorbed from the gas-trointestinal tract and carried to the liver, where nitro-glycerin is subject to rapid metabolism and inactivation.

Absorption from the Stomach

Although the primary function of the stomach is not ab-sorption, its rich blood supply and the contact of its con-tents with the epithelial lining of the gastric mucosa provide a potential site for drug absorption. However, since stomach emptying time can be altered by many variables (e.g., volume of ingested material, type and viscosity of the ingested meal, body position, psycholog-ical state), the extent of gastric absorption will vary from patient to patient as well as at different times within a single individual.

The low pH of the gastric contents (pH 1–2) may have consequences for absorption because it can dra-matically affect the degree of drug ionization. For ex-ample, the weak base diazepam (pKa 3.3) will be highly protonated in the gastric juice, and consequently, ab- sorption across lipid membranes of the stomach will be particularly slow. On the other hand, the weak acid acetaminophen (pKa 9.5) will exist mainly in its un-ionized form and can more readily diffuse from the stomach into the systemic circulation (Fig. 3.3). 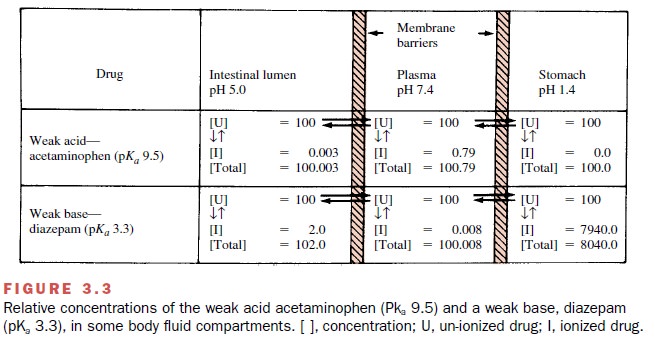 Because of the influence of pH on ionization of weak bases, basic drugs may be trapped in the stomach even if they are administered intravenously. Since basic compounds exist primarily in their un-ionized form in the blood (pH 7.4), they readily diffuse from the blood into the gastric juice. Once in contact with the gastric contents (pH 1–2), they will ionize rapidly, which re-stricts their diffusibility. At equilibrium, the concentra-tion of the un-ionized lipid-soluble fraction will be iden-tical on both sides of the gastric membranes, but there will be more total basic drug on the side where ioniza-tion is greatest (i.e., in gastric contents). This means of drug accumulation is called ion trapping.

Absorption from the Small Intestine

The epithelial lining of the small intestine is composed of a single layer of cells called enterocytes. It consists of many villi and microvilli and has a complex supply of blood and lymphatic vessels into which digested food and drugs are absorbed. The small intestine, with its large surface area and high blood perfusion rate, has a greater capacity for absorption than does the stomach. Most drug absorption occurs in the proximal jejunum (first 1–2 m in humans).

Although transfer of drugs across the intestinal wall can occur by facilitated transport, active transport, en-docytosis, and filtration, the predominant process for most drugs is diffusion. Thus, the pKa of the drug and the pH of the intestinal fluid (pH 5) will strongly influ-ence the rate of drug absorption. While weak acids like phenobarbital (pKa 7.4) can be absorbed from the stom-ach, they are more readily absorbed from the small in-testine because of the latter’s extensive surface area.

Absorption from the Large Intestine

The large intestine has a considerably smaller absorp-tive surface area than the small intestine, but it may still serve as a site of drug absorption, especially for com-pounds that have not been completely absorbed from the small intestine. However, little absorption occurs from this site, since the relatively solid nature of the in-testinal contents impedes diffusion of the drug from the contents to the mucosa.

The most distal portion of the large intestine, the rectum, can be used directly as a site of drug adminis-tration. This route is especially useful where the drug may cause gastric irritation, after gastrointestinal sur-gery, during protracted vomiting, and in uncooperative patients (e.g., children) or unconscious ones. Dosage forms include solutions and suppositories. The processes involved in rectal absorption are similar to those de-scribed for other sites.

Although the surface area available for absorption is not large, absorption can still occur, owing to the ex-tensive vascularity of the rectal mucosa. Drugs ab-sorbed from the rectum largely escape the biotransfor-mation to which orally administered drugs are subject, because a portion of the blood that perfuses the rectum is not delivered directly to the liver, and therefore, rectally administered drug, at least in part, escapes hepatic first-pass metabolism.