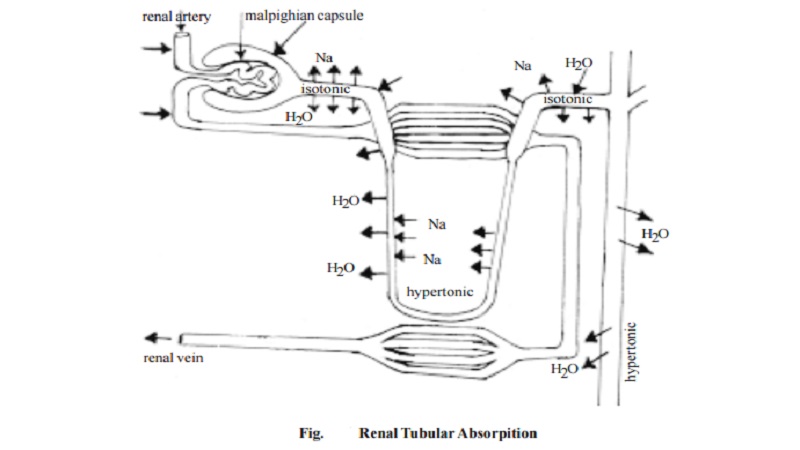 This is the second step in the urine formation. The glomerular filtrate contains many useful substances such as glucose, amino acids, mineral salts and vitamins dissolved in large amount of water. Reabsorption takes place in the uriniferous tubules. Reabsorption of useful substances is a differential or selective process. Substances such as glucose, sodium and calcium, are called 'high threshold substance' . They are actively reabsorbed in considerable quantities. Substances like urea and uric acid etc which are called 'low threshold substances' are reabsorbed in small quantities by a simple diffusion process or passive reabsorption. Substances like creatinine are not reabsorbed. They are completely eliminated.

On entering the distal convoluted tubule, the urine becomes nearly isotonic to the surrounding tissue fluid due to the active transport of sodium and passive transport of water. Summary of Renal Filtration and Reabsorption in 24 hours

As urine (isotonic) passes into the collecting tubule it becomes once more hypertonic by the osmotic reabsorption of water under the influence of the hormone ADH. The release of ADH is controlled by the osmoreceptors in the hypothalamus in response to changes in the osmotic pressure of the plasma circulating through the collecting tubule. Thus the urine formed contains 96% of water, 2% urea and 2% of the metabolic products.

This is the final step in the formation of urine during which the walls of tubule actively remove additional waste substances which are harmful to the body from the blood that have escaped filtration.