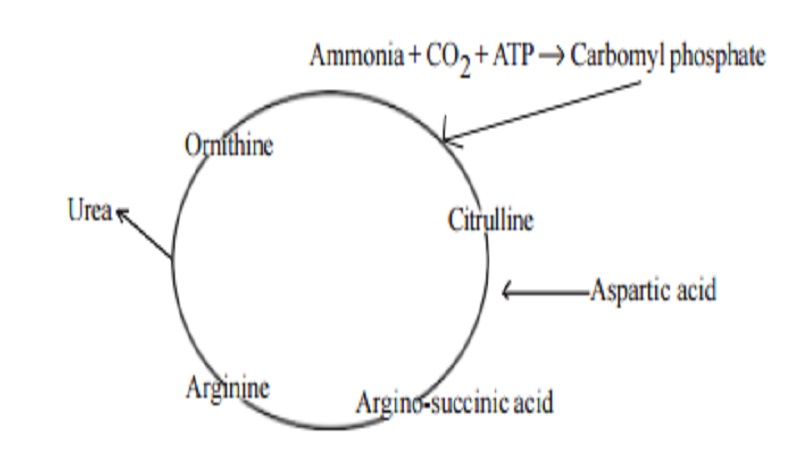 As a result of continuous synthesis and breakdown of materials many waste products are formed in cells. The process by which the cellular nitrogenous wastes are eliminated is called excretion.

Ureotelism is an adaptation for a semi-terrestrial habitat. Urea requires only a small quantity of water to form urine and never involves much water loss; Further, urea is much less toxic than ammonia and it can be retained in blood for sometime before it is transported and eliminated through the excretory organs. Though the concentration of urea in the blood is small, it can be stored safely in the bladder in high concentration. Thus ureotelism is conditioned by the shortage of water, characteristic of the terrestrial habitat.

Liver is the principal organ of urea biosynthesis. In the ornithine cycle, ammonia, formed by deamination in cells and tissues, combines with carbon dioxide to form carbamyl phosphate. This compound is subjected to a cyclic chemical reactions as provided in the figure. Three molecules of ATP are spent to convert the toxic ammonia into a molecule of urea. 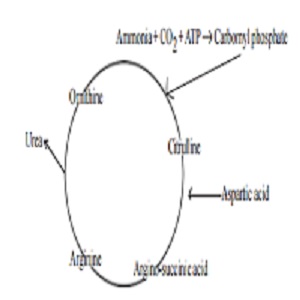 Nephron is the structural and functional unit of the kidney. There are about a million nephrons

In general, the kidney performs the following vital functions in the body :

3.Regulation of salt-water balance by hormones secreted both intra-and extra-renally.

Formation of renin and erythropoietin and thereby playing a role in the regulation of blood pressure and erythropoises respectively.