Power is defined as the quantity of energy dissipated or stored per unit time.

ü Power is defined as the quantity of energy dissipated or stored per unit time.

ü The general measurement technique for average power is to attach a properly calibrated sensor to the transmission line port at which the unknown power is to be measured.

ü The output from the sensor is connected to an appropriate power meter. The RF power to the sensor is turned off and the power meter zeroed. This operation is often referred to as “zero setting” or “zeroing.” Power is then turned on.

ü The sensor, reacting to the new input level, sends a signal to the power meter and the new meter reading is observed.

ü There are three popular devices for sensing and measuring average power at RF and microwave frequencies. Each of the methods uses a different kind of device to convert the RF power to a measurable DC or low frequency signal. The devices are the diode detector, the bolometer and the thermocouple.

The low-barrier Schottky (LBS) diode technology which made it possible to construct diodes with metal-semiconductor junctions for microwave frequencies that was very rugged and consistent from diode to diode. These diodes, introduced as power sensors in 1974, were able to detect and measure power as low as −70 dBm (100 pW) at frequencies up to 18 GHz.

Thermistor elements are mounted in either coaxial or waveguide structures so they are compatible with common transmission line systems used at microwave and RF frequencies.

If RF power is applied to the detecting thermistor, Vrf decreases so that

Where Prf is the RF power applied and R is the value of the thermistor resistance at balance. But from zero-setting, Vrfo= Vc so that 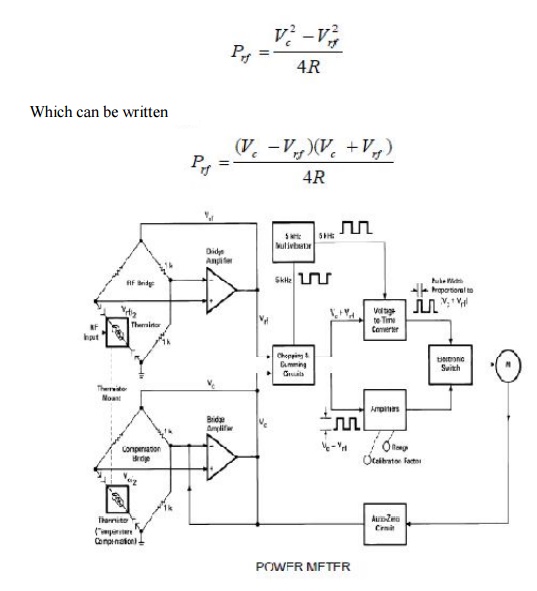 Thermocouple sensors have been the detection technology of choice for sensing RF and microwave power since their introduction in 1974. The two main reasons for this evolution are: 1) they exhibit higher sensitivity than previous thermistor technology, and 2) they feature inherent square-law detection characteristic (input RF power is proportional to DC voltage out).

Since thermocouples are heat-based sensors, they are true “averaging detectors.” Thermocouples are based on the fact that dissimilar metals generate a voltage due to temperature differences at a hot and a cold junction of the two metals. The power sensor contains two identical thermocouples on one chip, electrically connected as in Figure.

Each thin-film resistor and the silicon in series with it have a total resistance of 100 Ω. The two thermocouples in parallel form a 50 Ω termination to the RF transmission line. The lower node of the left thermocouple is directly connected to ground and the lower node of the right thermocouple is at RF ground through bypass capacitor Cb. The DC voltages generated by the separate thermocouples add in series to form a higher DC output voltage. The principal advantage, however, of the two thermocouple scheme is that both leads to the voltmeter are at RF ground; there is no need for an RF choke in the upper lead. If a choke were needed it would limit the frequency range of the sensor. For a square wave modulated signal the peak power can be calculated from the average power measured as where T is the time period and Շ is the pulse width. Y P peak av P.