Grafting of tissues or organs between genetically unrelated individuals is inevitably fol-lowed by rejection of the grafted tissue or organ.

Grafting of tissues or organs between genetically unrelated individuals is inevitably fol-lowed by rejection of the grafted tissue or organ. On the other hand, if tissues or organs are transplanted between genetically identical individuals, rejection does not take place. The understanding of the factors controlling rejection became possible after inbred strains of mice became available. Inbred strains are obtained after 20 or more generations of brother/sister mating and for all purposes are constituted by genetically identical animals. The use of these animals made it possible to prove that graft rejection is under genetic con-trol, and that is subject to general immunological rules, i.e., specificity and memory.

The genetic control of graft rejection became obvious in experiments in which skin was transplanted among laboratory animals of the same or different inbred strains. When skin was grafted among animals of the same inbred strain, no rejection was observed. When grafting involved mice of different strains, the recipient animals rejected the graft, but the speed and intensity of the rejection reaction were clearly dependent on the degree of ge-netic relatedness between the strains used in the experiment.

Further understanding of the genetic regulation of graft rejection was obtained in studies involving first-generation hybrids (F1 hybrids) produced by mating animals of two genetically different strains. Such hybrids did not reject tissue from either parent, while the parents reject skin from the hybrids. The acceptance of tissues from both parental strains by F1 hybrids of two inbred strains was explained by the development of tolerance to all paternal and maternal specificities expressed by the hybrids during embryonic differentia-tion. On the other hand, animals of the parental strains rejected tissues from the hybrids be-cause those tissues express histocompatibility determinants of the other nonidentical strain to which they were not tolerant. Another important conclusion from these experiments was that the histocompatibility determinants are co-dominantly expressed.

Further studies, diagrammatically summarized in Figure 3.1, showed that graft re-jection shares two important characteristics with the classical immune responses: speci-ficity and memory. Animals repeatedly grafted with skin from a donor of one given strain show accelerated rejection, but if they receive a skin graft from an unrelated strain, the re-jection time is as long as that observed in a first graft. 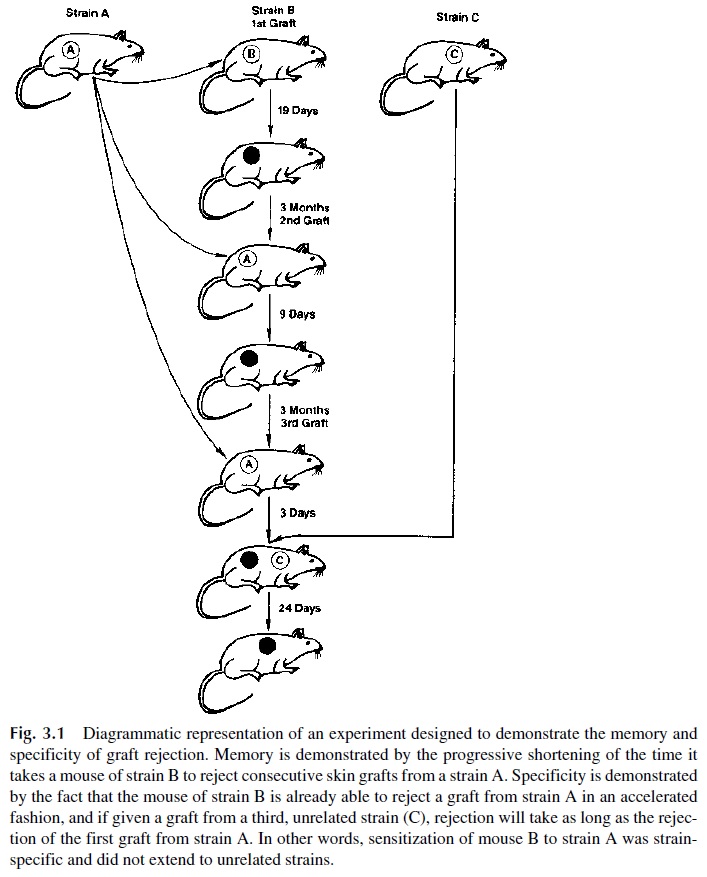 With time, it also became clear that the antigens responsible for graft rejection are ex-pressed in most cells and tissues. Laboratory animals receiving skin grafts from animals of the same species but of a different strain developed antibodies that reacted specifically with skin and peripheral blood lymphocytes of the donor strain. These findings pointed to the sharing of antigens by different tissues of the donor animal. This possibility was confirmed through reverse immunizations in which mice preinjected with lymphocytes obtained from a different strain would show accelerated rejection of a skin graft taken from the animals of the same strain from which the lymphocytes were obtained. It is now well established that most nucleated cells of the organism express the antigens responsible for rejection, which are designated as histocompatibility antigens.

After many years of detailed genetic analysis, it became clear that the system that deter-mines the outcome of a transplant is complex and highly polymorphic. It was also deter-mined that this system contained antigens of variable strength. The major antigens are re-sponsible for most graft rejection responses and trigger a stronger immune response than others, which are designated as minor. The aggregate of major histocompatibility antigens is known as the major histocompatibility complex (MHC). All mammalian species express MHC antigens on their nucleated cells.

Historically, the human histocompatibility antigens were defined after investigators ob-served that the serum of multiparous women contained antibodies agglutinating their hus-bands’ lymphocytes. These leukoagglutinins were also found in the serum of multitrans-fused individuals, even when the donors were compatible with the transfused individual for all the known blood groups. The antigens responsible for the appearance of these antibod-ies were thus present on leukocytes and received the designation of human leukocyte anti-gens (HLA).

It soon became apparent that the immune response of an individual to the HLA anti-gens of another individual was responsible for the rejection of tissues grafted between ge-netically unrelated individuals . The study of HLA antigens received its initial impetus from the desire to transplant tissues with minimal risk of rejection and from their interest to geneticists as one of the most polymorphic antigenic systems in humans.

It took several decades for a wider picture of the biological significance of HLA anti-gens to become obvious. Today we know that these molecules are at the very core of the immune response and at the basis of the establishment of tolerance (lack of response) to self antigens.