Genetics of the MHC(Major Histocompatibility Complex)

The key concept that needs to be stressed is that the MHC is an extremely polymorphic anti-genic system.

GENETICS OF THE MHC

The key concept that needs to be stressed is that the MHC is an extremely polymorphic anti-genic system. As a consequence of the multiplicity of alleles for the different MHC anti-gens, there is only an extremely remote chance that two unrelated humans will be found who share an identical set of MHC antigens. Therefore, the MHC antigens are alloantigens (from the Greek allos, different) distinguishing individuals within a given species. This is the basis for their use as genetic markers, which found a major practical application in pa-ternity studies before DNA analysis became commonplace, and at the same time is the ma-jor obstacle to organ and tissue transplantation.

Each antigenic specificity of any given MHC locus is determined by one structural gene. For each MHC locus, a given individual carries two structural genes: one inherited with the paternal chromosome and the other inherited with the maternal chromosome. Each chromosome, on the other hand, contains one set of structural genes coding for all the pos-sible MHC molecules. The set of alleles that an individual carries at each locus on a single chromosome forms the haplotype, transmitted as a single unit except in very rare cases of recombination within the complex. Haplotypes can only be determined by family studies, which establish which MHC specificities are “linked,” i.e., transmitted as a bloc in a single chromosome.

For each MHC locus, a given individual may be homozygous or heterozygous. In ho-mozygous individuals both chromosomes carry the same structural gene for that locus, and the cells of the individual express one single antigenic specificity (e.g., an individual ho-mozygous for HLA-B27 carries two genes for the B27 specificity, one in each chromo-some). Most individuals are heterozygous for any given locus and will express the two specificities inherited from each parent, encoded by the two DNA strands of the same chro-mosome. For example, a heterozygous B8/B27 individual will have a gene coding for B8 in one chromosome and a gene coding for a B27 in the other. Both specificities for each lo-cus are expressed by every single cell of this heterozygous individual (although the level of expression may vary depending on the marker). Therefore, the MHC genes are co-domi-nant at the cellular level, and there is no allelic exclusion in their expression, contrary to what is observed in the case of immunoglobulin genes .

Because all the alleles of any individual are co-dominant, it follows that both haplo-types that form an individual genotype will be expressed in the cells of that individual. The sum of all the specificities coded by the genome of the individual is known as that individ-ual’s phenotype. An example of the notation of a given individual’s phenotype is as fol-lows: HLA-A1,2; B8,27; Dw3,-; DR23,-. The hyphen indicates that only one antigen of a particular locus can be typed; this can signify that the individual is homozygous or that he or she possesses an antigen that cannot be typed because no appropriate reagents are avail-able. Family studies are the only way to distinguish between these two possibilities. Figure 3.5 shows an example of haplotype inheritance within the HLA complex in humans, illus-trating the fact that the haplotypes are transmitted, as a rule, as single units following the rules of simple Mendelian heredity. This rule is broken in cases of recombination between the paternal and maternal chromosomes. 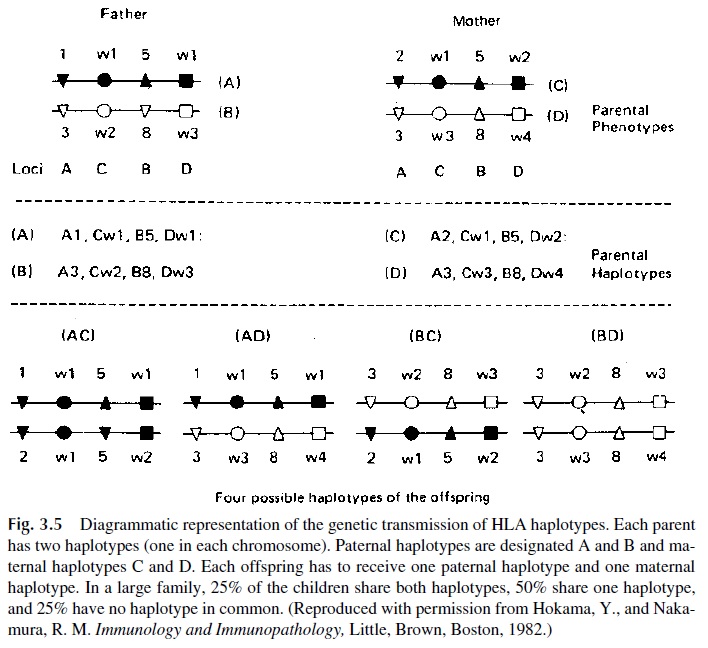