The MHC region is associated with more diseases than any other region of the human genome.

The MHC region is associated with more diseases than any other region of the human genome. In some cases, carrying specific HLA alleles may protect an individual against specific diseases. In other cases, carrying other HLA alleles may be associated with unusual frequency of diseases generally classified as “autoimmune.” A list of the most important associations between HLA antigens and specific diseases is given in Table 3.2. 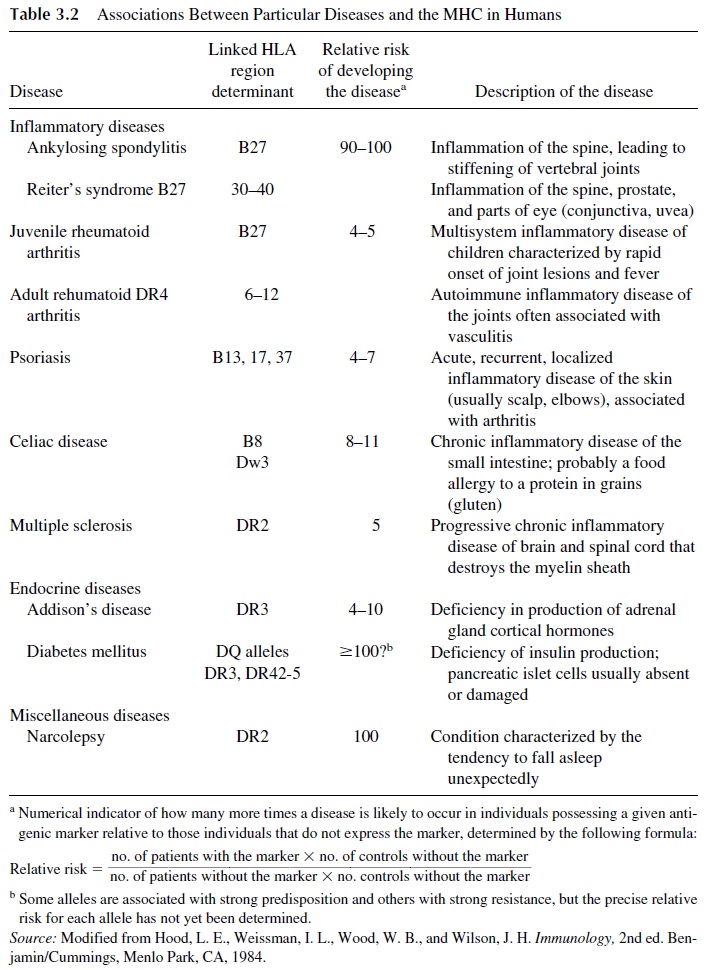 A. MHC and Malaria

The association of particular MHC phenotypes with stronger responses to a given infec-tious agent was recently demonstrated in the case of malaria. In sub-Saharan Africa, malaria is responsible for the death of up to 2 million individuals per year. Researchers very recently found that individuals who do not express the class I HLA-Bw53 and the class II DQw5 alleles are at very high risk for the most severe and lethal forms of malaria. Recip-rocally, since carrying the “protective” haplotype improves the chances of survival, its fre-quency in the population increased by natural selection. Nowadays, 40% of the natives of sub-Saharan Africa are positive for HLA-Bw53 an/or DQw5.

B. MHC and Autoimmune Diseases

Several mechanisms have been postulated to depend on the associations between MHC antigens and specific autoimmune diseases.

1.    MHC binding of exogenous peptides structurally similar to endogenous pep-tides.As mentioned, MHC genes control the immune response by acting as bind-ing sites for peptides derived from the processing of antigens from common pathogens. If the peptides in question are structurally similar to those derived from an endogenous protein and are bound with relatively high affinity to the MHC molecule, an immune response that eventually affects cells expressing the autologous peptide may ensue.

This mechanism is supported by the fact that most human diseases in which autoimmune phenomena play a pathogenic role are strongly linked with class II HLA genes, particularly with the genes of the DQ locus. This probably reflects the fact that DQ molecules are involved in the interactions of APCs with helper/inducer CD4 T lymphocytes.

One well-studied example of the association between DQ molecules and autoimmunity is diabetes mellitus (DM). The susceptibility or lack of suscepti-bility of humans to the autoimmune response against pancreatic islet cells that results in insulin-dependent diabetes mellitus (IDDM) is determined by allelic polymorphisms of the β1 chain of the DQ antigen.

More specifically, the charge of the residue at position 57 of that chain seems to determine whether or not the immune system will be presented with peptides able to trigger the autoimmune response. Most IDDM patients have a noncharged valine in that position, which is usually occupied by an aspartate in nondiabetics. The binding of the anchor-ing residues of a diabetes-inducing peptide may be prevented by the presence of a charged aspartate residue in the groove, but it may take place with high-affin-ity binding when the 57 residue is occupied by a hydrophobic acid (i.e., valine). The source of the diabetes-inducing peptide remains unknown, but the fact that diabetes has been observed to follow some viral infections has led several au-thors to postulate that a viral protein–derived peptide may play that role.

MHC-I antigens can also present antigen-derived peptides (particularly from intracellular pathogens) to CD8+ cells, and this could be the basis for an autoimmune response in the case of ankylosing spondylitis and other reactive arthropathies, in which an infectious peptide presented by HLA-B27 could be cross-reactive with an endogenous collagen-derived peptide, equally associated with HLA-B27.

It must be stressed that carrying the genes associated with any given au-toimmune diseases implies only an increased susceptibility to the disease. The individual may remain asymptomatic for life, but chance encounter with a pathogen can trigger an autoimmune response.

2.    MHC molecules acting as receptors for intracellular pathogens.Such pathogenswould interact with specific HLA antigens in the cell membrane and, as a result, infect the cells carrying those antigens. The infected cell would undergo lon-glasting changes in cell functions, which would eventually result in disease. This could be the case in ankylosing spondylitis and related disorders (acute anterior uveitis, Reiter’s syndrome). Over 90% of the individuals with ankylosing spondylitis are HLA-B27, and about 75% of the patients who develop Reiter’s syndrome are HLA-B27 positive. Reiter’s syndrome frequently follows an in-fection with Chlamydia trachomatis, and some evidence of persistent infection with this intracellular organism has been obtained, but the connection remains controversial.

3.    Molecular mimicry between antigenic determinants in infectious agents and HLA antigens.This mechanism has been postulated to explain the relationshipbetween Yersinia pseudotuberculosis and ankylosing spondylitis. This bac-terium has been shown to contain epitopes cross-reactive with HLA-B27. There-fore, it could be speculated that an immune response directed against Y. pseudo-tuberculosiscould lead to an autoimmune reaction against self. However, whythis reaction would affect specific joints remains to be explained.

4.    Linkage disequilibrium between HLA genes and disease-causing genes.A verystrong association of various forms of 21-hydroxylase deficiency (the molecular basis of a disease known as congenital adrenal hyperplasia) with various HLA haplotypes (HLA -Bw 47, DR7) suggested a possible link between this disease and MHC genes. However, data obtained in classical genetic studies suggested that this disorder was determined by alleles of a single locus. These apparent contradictions were resolved when it was demonstrated that the genes coding for 21-hydroxylase are located on chromosome 6, in the segment flanked by MHC-I and MHC-II genes (Fig. 3.3). Given this physical proximity between MHC genes and the 21-hydroxylase genes, a strong linkage disequilibrium between them is not surprising. The very strong associations between HLA-DR2 and nar-colepsy, HLA-B27 and ankylosing spondylitis, and HLA-Bw35 and hemochro-matosis will most likely become evident when the functions of the newly se-quenced MHC genes are explained. 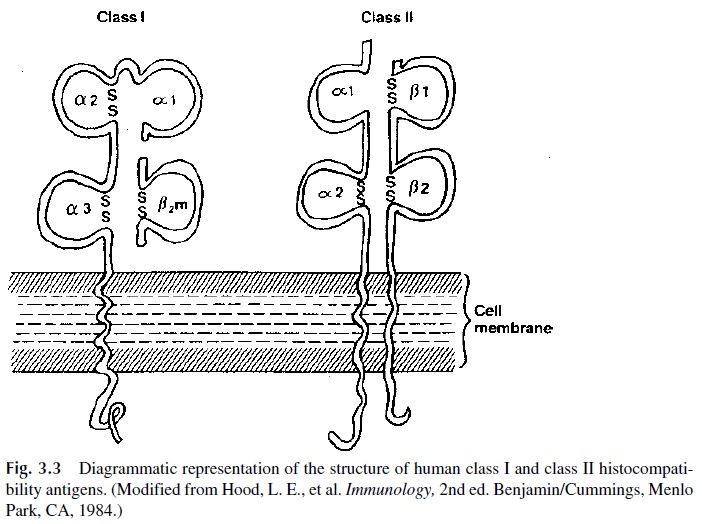