THE MHC COMPLEX AND THE IMMUNE RESPONSE

As detailed studies of the immune responses to viruses increased in sophistication, it be-came evident that the immune system relies on cytotoxic T lymphocytes to destroy viral-infected cells and in this way to curtail viral replication and spread. An unexpected obser-vation was that CD8+ cytotoxic T lymphocytes would only kill viral-infected cells if both (the cytotoxic T cell and the infected cell) shared identical class I MHC antigens. The speci-ficity of the cytotoxic reaction is directed to a specific configurational determinant formed by the association of a viral oligopeptide with an autologous MHC-I molecule. Cells in-fected by the same virus but expressing different MHC-I molecules will present a different MHC-I–oligopeptide complex, not recognizable by a cytotoxic T cell from an animal ex-pressing a different set of MHC-I molecules. Thus, cytotoxicity mediated by T lympho-cytes is MHC-restricted and the MHC-I molecules are the “restricting element.”

The restriction of cytotoxic reactions represents an adaptation of the immune system to the need to differentiate “normal” cells from cells altered as a consequence of intracel-lular infections. The elimination of “nonself” material requires the recognition of nonself antigenic structures and the induction of an immune response through a set of cell-cell in- teractions involving macrophages, T lymphocytes, and B lymphocytes. The effector mech-anisms responsible for elimination of “nonself” may be mediated by antibodies or by cyto-toxic T cells. Viruses and other intracellular parasites present a special problem to the im-mune system due to their shielding from contact with immunocompetent cells recognizing antigenic structures on the infectious agent itself. What the immune system eventually de-veloped was the ability to recognize and destroy infected cells. This process has to involve the recognition of antigenic markers related to the infectious agent by the immune system. As discussed, this is explained by the fact that oligopeptides derived from nonself proteins coded by intracellular infectious agents become associated with MHC molecules and are transported to the cell membrane. Specific resting T cells able to recognize the MHC-oligopeptide complexes (“modified” self in the sense that part of the antigen is self and part is not) become activated and differentiate into cytotoxic cells. For the differentiated cytotoxic T cells to be able to recognize and kill a modified cell, they have to interact with cells expressing the same exact match of MHC and peptide and, hence, the restricting nature of the MHC molecule.

The loading of peptides into MHC-I molecules is an extremely complex process. To reach the cell membrane in a stable configuration, the MHC molecule must always be loaded with a peptide. In the absence of intracellular infection, peptides derived from au-tologous proteins occupy the peptide-binding groove, and these fail to elicit an immune re-sponse by the fact that they are self peptides. During an infection, proteins synthesized by a replicating intracellular infectious agent are first cut by a proteasome—a multisubunit proteolytic enzyme that yields fragments of 7–15 amino acids. The peptides are subse-quently transported to the endoplasmic reticulum (ER) by molecules known as transporters associated with antigen processing (TAP), which are located within the MHC. Once in the ER, the transported peptides replace endogenous peptides bound to newly synthesized MHC molecules and the complex is transported to the cell membrane, allowing the immune system to recognize the self MHC-I–nonself peptide complex.

B. MHC-II and Antigen Presentation to Helper T Lymphocytes

T lymphocytes cannot respond to unmodified antigens. Their activation usually requires endocytosis and processing of the antigen by a specialized antigen-presenting cell (APC). During “processing,” soluble antigens are broken down into peptides of 12–23 amino acids, which become associated in the cytoplasm with newly synthesized MHC-II molecules (the groove of the HLA class II dimer is longer than the groove of MHC-II molecules and ac-commodates slightly larger oligopeptides). The peptide–MHC-II complex is then trans-ported across the cytoplasm and inserted in the cell membrane. The MHC-II–associated peptides can be recognized by CD4+ helper T lymphocytes carrying a peptide-specific T-cell receptor (TcR) but are not recognized by TCR on CD8+ lymphocytes. All cells able to synthesize and express MHC-II molecules can function as anti-gen-presenting cells.

Increased expression of MHC molecules on cell membranes requires prior peptide loading of these molecules. Interferons seem to stimulate the synthesis of the components needed to ensure the overexpression of MHC molecules, including the MHC molecules, proteasomes, and transport proteins (TAP1 and 2). The consequences of MHC molecule upregulation are multifold: on the one hand, it facilitates the inductive stages of the immune response involving helper and cytotoxic T cells. On the other hand, it may create optimal conditions for the activation of autoreactive clones .

The interaction between MHC-expressing cells and the immune system is subjected to two levels of MHC restriction:

A theoretical stumbling block is whether or not the limited number of MHC-II antigens is sufficient to bind a vast repertoire of peptides (on the order of 108-1010). The peptides presented to T lymphocytes are helical structures with two parts (Fig. 3.6). The part of the peptide that protrudes above the surface of the groove and is accessible to the T-cell receptor is known as the “epitope.” The rest of the peptide interacts with the groove of the MHC molecule. This interaction is mediated by “anchoring residues,” shared by many peptides. Thus a given peptide can bind to many different class I or class II HLA molecules, and a limited repertoire of these molecules can accommodate a wide diversity of peptides. 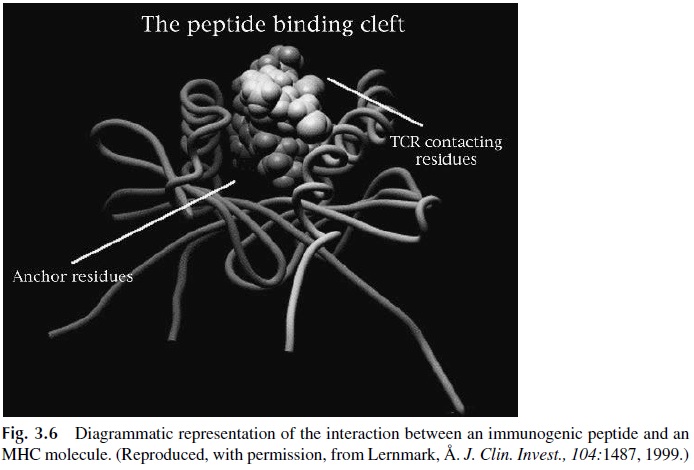 The anchoring residues determine the binding affinity of a given oligopeptide to specific MHC-II alleles, which varies over 2 or 3 orders of magnitude between different alleles. These differences in binding affinity are believed to determine the strength of the response. A peptide bound with high affinity will be presented to the T cells in optimal conformation determining a high response to this epitope. In contrast, If the binding is of low affinity the individual will be a low responder or a nonresponder. Thus, the magnitude of the immune response is determined by the close fit between peptides and MHC molecules. It has also been postulated that these differences may have a direct reflection on the type of immune response (TH 1 vs. TH 2) elicited after the interaction between APC and T helper cells .

Even with a limited MHC-II repertoire, the probabilities of mounting a good response to a complex are high. Such antigens are likely to generate many different oligopeptides during processing, and the odds will be favorable for the emergence of some peptide(s) able to bind to the MHC-II molecules of a particular individual. These odds will increase if the in-dividual is heterozygous, as is the case in over 95% of humans. The expression of two specificities per locus (one paternal and the other maternal) doubles their chance of finding a good fit between peptides and MHC II molecules and, therefore, of mounting an adequate immune response to that particular antigen.

It is clear that the shape and charge of the MHC molecule is perfectly suited to closely sur-round small peptides and ensure that the outward-pointing residues are in a position to con-tact the TCR. However, the MHC molecules are not designed to bind strongly hydropho-bic or nonpolar molecules such as lipids or carbohydrates. While the response to carbohydrates is elicited with minimal or no cooperation from helper T cells (thus circum-venting the need for MHC presentation to helper T cells), the response to lipids and gly-colipids seems to involve presentation by a different set of molecules, generically desig-nated as CD1.

The CD1 molecules are structurally similar to the MHC molecules, suggesting that they arose from a primordial ancestor gene, which differentiated into at least two classes of antigen-presenting molecules. The CD1 genes are located on chromosome 1, and the CD1 molecules, similarly to MHC-I molecules, have a large polypeptide chain with three do-mains ( α1, α2 α3), which is noncovalently associated withβ2 microglobulin. The α1 and α2 domains form a groove much deeper than the MHC I groove. It is formed by hy- drophobic residues likely to bind very hydrophobic ligands such as compounds derived fromMycobacterium tuberculosis, including mycolic acids, lipoarabinomannan, and glu-cose monomycolate. Lipopolysaccharides from gram-negative bacteria and lipotechoic acid from gram-positive bacteria are also likely to be presented by CD1. Many details must yet be determined before a complete picture of CD1-mediated presentation can emerge.