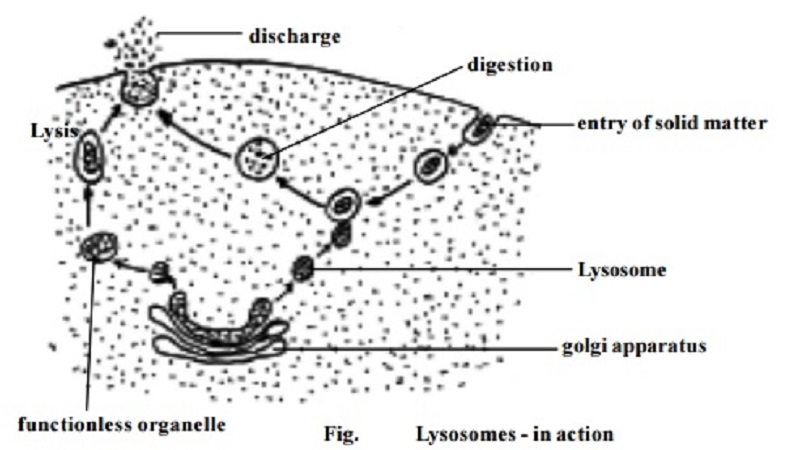 Lysosomes were initially named as 'perinuclear dense bodies'. The name 'lysosome' was coined by C.de Duve in 1955.

Lysosomes occur in all animal cells. However they are not found in mature mammalian erythrocytes. Muscle cells contain very few lysosomes. They are numerous in epithelial cells of secretory and excretory organs.

Each lysosome is a round structure. It is filled with a dense material. Their shapes and densities vary. Their size ranges from 0.2 to 5 �m.

Lysosomes originate either from the Golgi apparatus or directly from the endoplasmic reticulum. The enzymes they contain are used in thedissolution and digestion of redundant structures or damaged macromol-ecules from within or outside the cell. For example, when an animal cell in-gests food into a food vacuole, lysomes fuse with the vacuole and break down the contents. Their enzymes digest carbohydrates, fat and proteins. The glands in some digestive organs package their digestive enzymes in lysosomes before releasing them outside the membrane. When a cell dies its own lysosomes release the enzymes that digest the remains of the cell in a process known as autolysis.

These are spherical organelles bounded by a single membrane. They are found in the cells of Protozoa, fungi, plants, liver and kidney of verte-brates. The name peroxisomes was coined by C.de Duve and P. Baudhuin (1966)

Peroxisomes contain catalase, an enzyme that catalyses the decom-position of hydrogen peroxide to the harmless products, water and oxygen.

Hydrogen peroxide is a by- product of certain reactions of metabolism. It is potentially a very harmful oxidising agent.