The enormous variety of living organisms surrounding us is incomprehensible.

The enormous variety of living organisms surrounding us is incomprehensible. About 1.5 million species of animals are already described and named. Without suitable method of classification, the study of various organisms would be difficult.

For example, among the butterflies, it is difficult to identify their varieties. Because there are different colour of butterflies (blue, red, brown, yellow) and butterflies with spots (big and small).

Tigers and zebras have stripes. On the other hand tigers look more like cats and zebras are more like horses. Can we classify them based upon their appearances? What factors are significant for their classification?

Long ago, when human civilization was confined to small place, the number and variety of animals and plants that they were aware was limited. However, when the European explorers went around the world during the 15th and 16th centuries, they could collect information on plants and animals from across the world. The immense diversity in shape, size and features baffled them.

The first systematic approach to the classification of living organisms was made by a Swedish botanist, Carolus Linnaeus. He generated the standard system for naming organisms in terms of genus, species and more extensive groupings using Latin terms.

For example, the tiger is a carnivore and the zebra is an herbivore, both are striped animals, but the tiger resemble a cat more than zebra. However all the three produce milk and feed their young ones.

Taxonomists realized that wide features are shared for the ranking of higher group in classification. Therefore characters that strike the eye, like the tigerâ€™s stripes, are often less significant than subtler ones, such as how many toes the animal possesses.

Different types of animals produce milk to feed their young ones. Therefore all of them could be grouped into one major category, known as mammals. Higher ranks are more comprehensive.

Human beings have a wonderful capacity to discriminate different animals. While walking through a field we may come across a jumping frog. Is it a frog or a toad? We may see a snake. Is it poisonous or not? We may hear a bird call but we are not familiar with it. Sometimes a fish may be seen in a temple tank. What kind is it?

In order to nd an answer to such questions, we should know how to identify animals. For a biologist it is necessary to identify the organism, which have a name for identi cation and to know the group it belongs to.

It is the theoretical study of classification including its basic principles, procedures and rules.

It is the ordering of organism into groups on the basis of their similarities, dissimilarities and relationship. 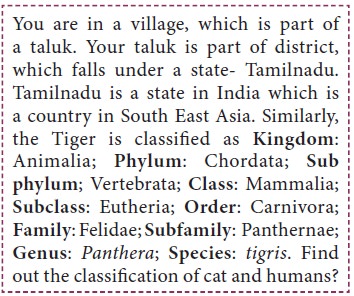