A simple way to build lexical analyzer is to construct a diagram that illustrates the structure of the tokens of the source language, and then to hand-translate the diagram into a program for finding tokens. Efficient lexical analysers can be produced in this manner.

A simple way to build lexical analyzer is to construct a diagram that illustrates the structure of the tokens of the source language, and then to hand-translate the diagram into a program for finding tokens. Efficient lexical analysers can be produced in this manner. 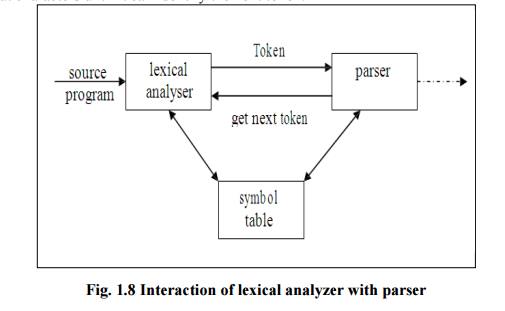 Since the lexical analyzer is the part of the compiler that reads the source text, it may also perform certain secondary tasks at the user interface. One such task is stripping out from the source program comments and white space in the form of blank, tab, and new line character. Another is correlating error messages from the compiler with the source program.

1)  Simpler design is the most important consideration. The separation of lexical analysis from syntax analysis often allows us to simplify one or the other of these phases.

There is a set of strings in the input for which the same token is produced as output. This set of strings is described by a rule called a pattern associated with the token. The pattern is set to match each string in the set.

In most programming languages, the following constructs are treated as tokens: keywords, operators, identifiers, constants, literal strings, and punctuation symbols such as parentheses, commas, and semicolons.

Collection or group of characters forming tokens is called Lexeme. A lexeme is a sequence of characters in the source program that is matched by the pattern for the token. For example in the Pascal’s statement const pi = 3.1416; the substring pi is a lexeme for the token identifier.

A pattern is a rule describing a set of lexemes that can represent a particular token in source program. The pattern for the token const in the above table is just the single string const that spells out the keyword. 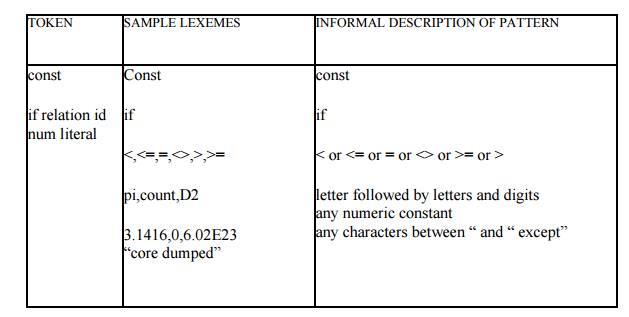 Certain language conventions impact the difficulty of lexical analysis. Languages such as FORTRAN require a certain constructs in fixed positions on the input line. Thus the alignment of a lexeme may be important in determining the correctness of a source program.

The integer code gives the token type, the pointer points to the value of that token. Pairs are also retuned whenever we wish to distinguish between instances of a token.

The attributes influence the translation of tokens.

The following are the error-recovery actions in lexical analysis:

5) Panic mode recovery: Deletion of successive characters from the token until error is resolved.