A Complier is a program that reads a program written in one language-the source language-and translates it in to an equivalent program in another language-the target language . As an important part of this translation process, the compiler reports to its user the presence of errors in the source program

3. What are the cousins of compiler?

The following are the cousins of compilers

4. What are the main two parts of compilation? What are they performingThe two main parts are

5. What is a Structure editor?

6. What are a Pretty Printer and Static Checker?

·     A Pretty printer analyses a program and prints it in such a way that the structure of the program becomes clearly visible.

·     A static checker reads a program, analyses it and attempts to discover potential bugs with out running the program.

7. How many phases does analysis consists?

8. What happens in linear analysis?

This is the phase in which the stream of characters making up the source program is read from left to right and grouped in to tokens that are sequences of characters having collective meaning.

9. What happens in Hierarchical analysis?

This is the phase in which characters or tokens are grouped hierarchically in to nested collections with collective meaning.

10. What happens in Semantic analysis?

This is the phase in which certain checks are performed to ensure that the components of a program fit together meaningfully.

12. What is a Loader? What does the loading process do?

A Loader is a program that performs the two functions

The process of loading consists of taking relocatable machine code, altering the relocatable address and placing the altered instructions and data in memory at the proper locations.

13. What does the Link Editing does?

Link editing: This allows us to make a single program from several files of relocatable machine code. These files may have been the result of several compilations, and one or more may be library files of routines provided by the system and available to any program that needs them.

A preprocessor is one, which produces input to compilers. A source program may be divided into modules stored in separate files. The task of collecting the source program is sometimes entrusted to a distinct program called a preprocessor.

The preprocessor may also expand macros into source language statements. 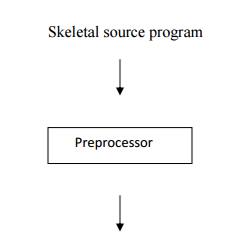 Assembler is a program, which converts the source language in to assembly language.

·     Simpler design is perhaps the most important consideration. The separation of lexical analysis from syntax analysis often allows us to simplify one or the other of these phases.

The first phase of compiler is Lexical Analysis. This is also known as linear analysis in which the stream of characters making up the source program is read from left-to-right and grouped into tokens that are sequences of characters having a collective meaning.

·     A Lexeme is a sequence of characters in the source program that is matched by the pattern for a token.

A Sentinel is a special character that cannot be part of the source program. Normally we use ‘eof’ as the sentinel. This is used for speeding-up the lexical analyzer.

Regular expression is a method to describe regular language

2) If a is a symbol in ∑,then a is a regular expression that denotes {a}

3)    Suppose r and s are regular expressions denoting the languages L(r ) and L(s) Then,

Recognizers are machines. These are the machines which accept the strings belonging to certain language. If the valid strings of such language are accepted by the machine then it is said that the corresponding language is accepted by that machine, otherwise it is rejected.