A Language For Specifying Lexical Analyzer

There is a wide range of tools for constructing lexical analyzers. Lex YACC

A LANGUAGE FOR SPECIFYING LEXICAL ANALYZER

There is a wide range of tools for constructing lexical analyzers.

Lex is a computer program that generates lexical analyzers. Lex is commonly used with the yacc parser generator. 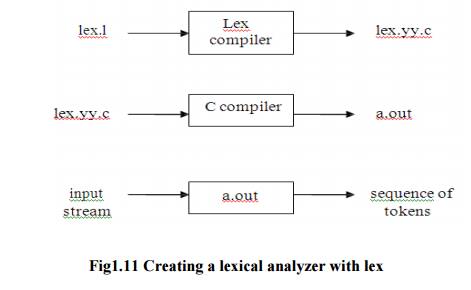 Definitions include declarations of variables, constants, and regular definitions

Ø    Rules are statements of the form

when pattern pi matches a lexeme. Actions are written in C code.

User subroutinesare auxiliary procedures needed by the actions. These can be compiledseparately and loaded with the lexical analyzer.

Yacc provides a general tool for describing the input to a computer program. The Yacc user specifies the structures of his input, together with code to be invoked as each such structure is recognized.

Yacc turns such a specification into a subroutine that handles the input process; frequently, it is convenient and appropriate to have most of the flow of control in the user's application handled by this subroutine.

Finite Automata is one of the mathematical models that consist of a number of states and edges. It is a transition diagram that recognizes a regular expression or grammar.

There are tow types of Finite Automata :

DFA is a special case of a NFA in which i) no state has an ε-transition.

DFA has five tuples denoted by

Construction of DFA from regular expression

The following steps are involved in the construction of DFA from regular expression: